Despite their endearing appearance and universal charm, not all Pokémon are created equal. You might claim the cutesy Jigglypuff or cuddly Snorlax is your favourite, but the will of the market pays no heed to your subjective proclivities. While some have sentimental value, there are some rare Pokémon cards that are so scarce, so legendary, and so gosh darn expensive, that they’ll have you wincing at their second-hand sale price.

And the Pokémon Trading Card Game collection business is thriving. The most expensive Pokémon card ever sold was auctioned off as recently as the top of this year, and collectors – from devout fans to wealthy celebrities – have never been more eager to dive into this antiquarian pocket creature pursuit.

Unfortunately, there’s a pretty good chance (it’s almost certain, in fact) that the stash of Pokémon cards sitting at the back of your closet, receiving nary a passing glance over the last few years, contains none of such rarity. Many of the most highly-prized cards are promotional copies, cards printed in error, or one-off releases that were likely never taken to the playground.

But even so, maybe you’ll stumble into an antique store one day and spy a treasured card just waiting to be snapped up. For the happy day when that happens (or simply to satisfy your curiosity as to just how much some will spend on these glorious little rectangles of joy), these are the rarest, and most expensive Pokémon cards hiding from collectors’ clutches. 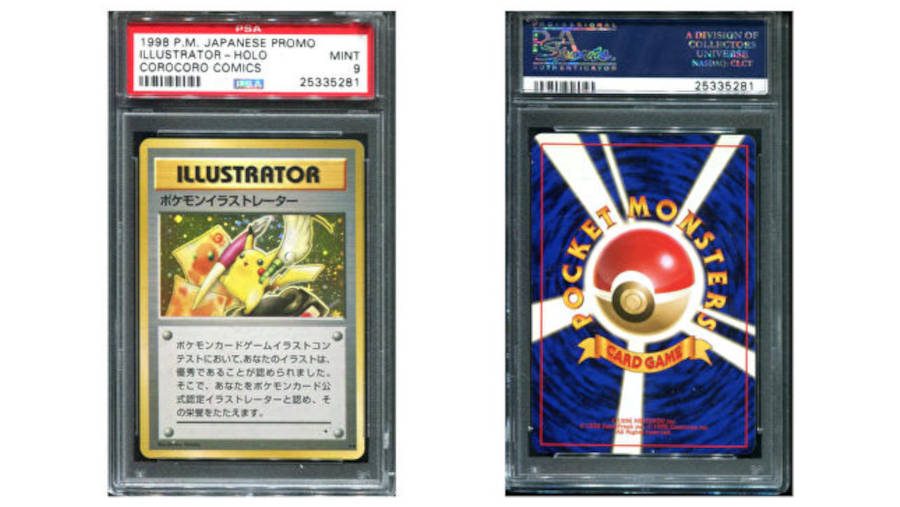 A promotional card originally handed out to winners of a 1998 illustration competition run through Japanese magazine CoroCoro, only 39 copies of Pikachu Illustrator were ever created. It’s the only card to feature the ‘Illustrator’ title, and its artwork was drawn by esteemed Pokémon illustrator Atsuko Nishida, creator of Pokémon’s main mascot, Pikachu. It also has a unique pen icon in the bottom-right corner, seen on no other card, presumably to remind us of its artistic roots.

It’s unknown exactly how many Pikachu Illustrator cards are still in existence, but ten PSA certified copies have been graded as ‘mint’. Until January 2021, it was the most expensive Pokémon card to ever have been sold at auction, with a PSA 9 Mint condition card selling for a whopping $233,000 / 167,600.

It’s a pity it’s so rare, though, because Pikachu looks even cuter than usual when holding an oversized fountain pen. 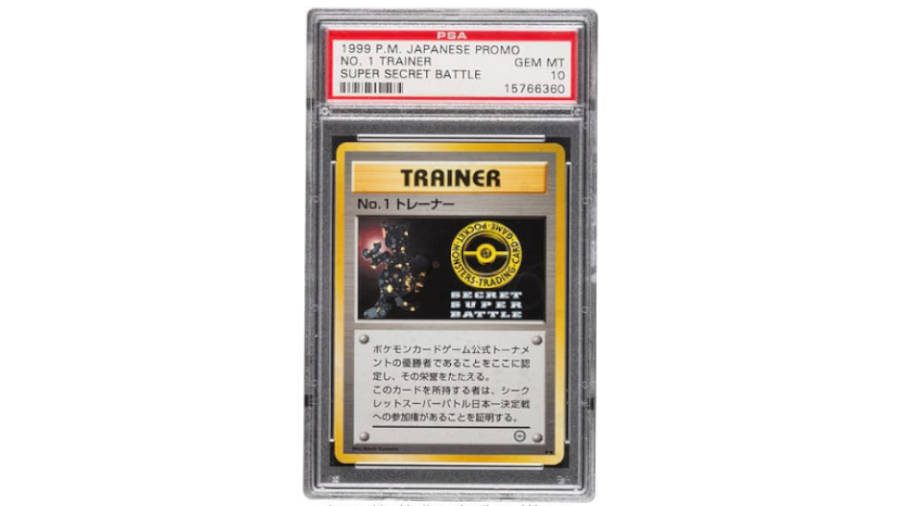 Possibly the rarest of all Pokémon cards, No.1 Trainer takes the concept of rarity, sprinkles in a dash of scarcity and exception, and basks in the light of secrecy to evolve into the highest stage of mystique that a collectable card can. A promotional card awarded to finalists of the 1999 Secret Super Battle Tournament – also functioning as the entry ticket to the tournament’s finals – it’s said that only seven copies were made. Six of them remain in perfect Professional Sports Authenticator (PSA) Gem Mint 10 condition, one of which was sold at auction in 2020 for $90,000 / £64,750.

Card tricks: How to build a Magic: The Gathering deck

The holographic card features a silhouetted Mewtwo and, according to the auction house responsible for last year’s sale, Heritage Auctions, the card’s description translates to: “The Pokémon Card Game Official Tournament’s champion is recognised here, and this honour is praised. By presenting this card, you may gain preferential entry into the Secret Super Battle”. 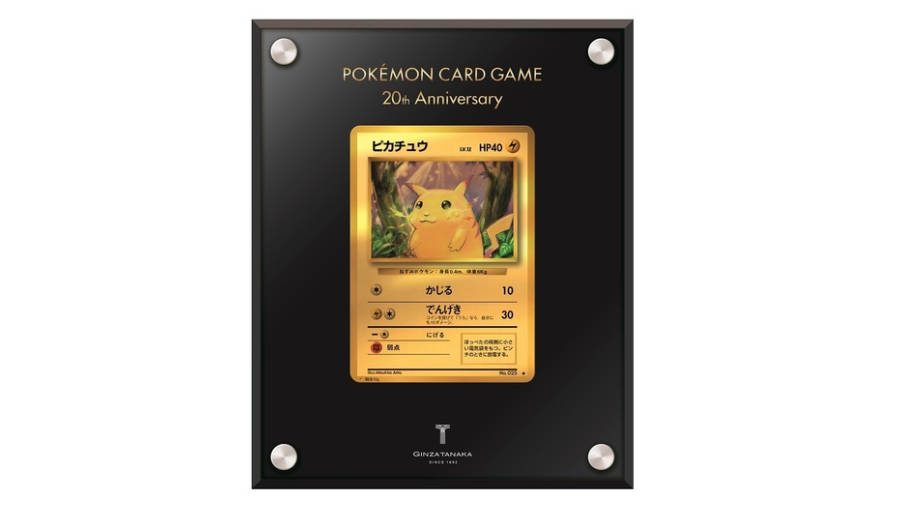 Nothing screams expensive like a flash of gold. And in this case, gold beats old. The gold Pikachu card isn’t an aged specimen originating in the early days of the trading card game, before the names Squirtle and Bulbasaur took the world by storm, but appeared in 2018, to mark the 20th anniversary of the Pokémon TCG.

To grab the card on release, would-be buyers had to enter a lottery

Although not legal in tournament play, the card came with a handy glass frame, so you could store the artefact, while helpfully displaying it to any visitors that you deem worthy. You’d probably have to explain why spending nearly two grand on a single, unusable card was a good financial decision, though. 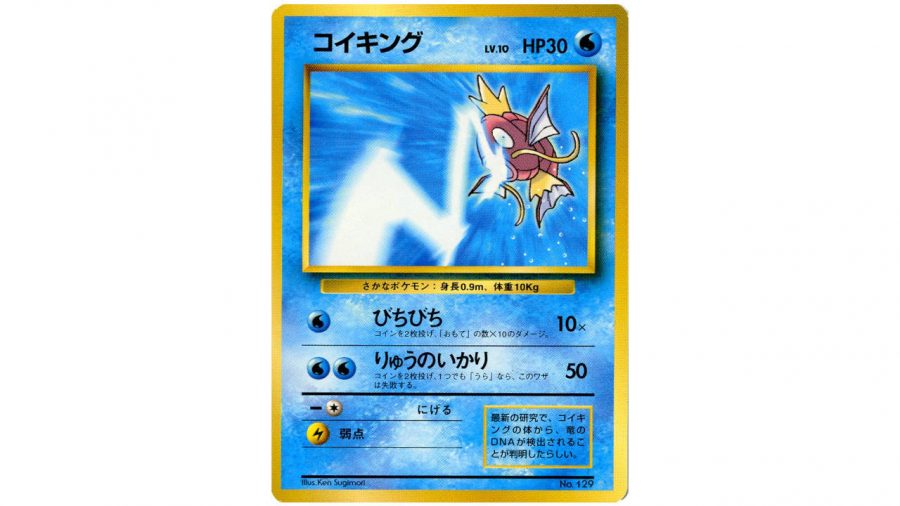 Magikarp might not be the ‘best’ Pokémon card to ever grace the tabletop – its gormless expression and ineffective moves don’t make for much tactical use – but this promotional card goes some way towards rectifying that.

Cardboard keen: Check out the best board games for adults

Handed to winners of the 1998 Tamamushi University Hyper Test Campaign, this Magikarp includes the Dragon Rage special move – not usually learnable by the magical fish until it has evolved into Gyrados, and a tad more useful than its usual Splash ability. Early promotional material suggests 1,000 copies of the card were originally produced, although it’s not known how many actually made it off the factory floor and are lurking around for public collection. 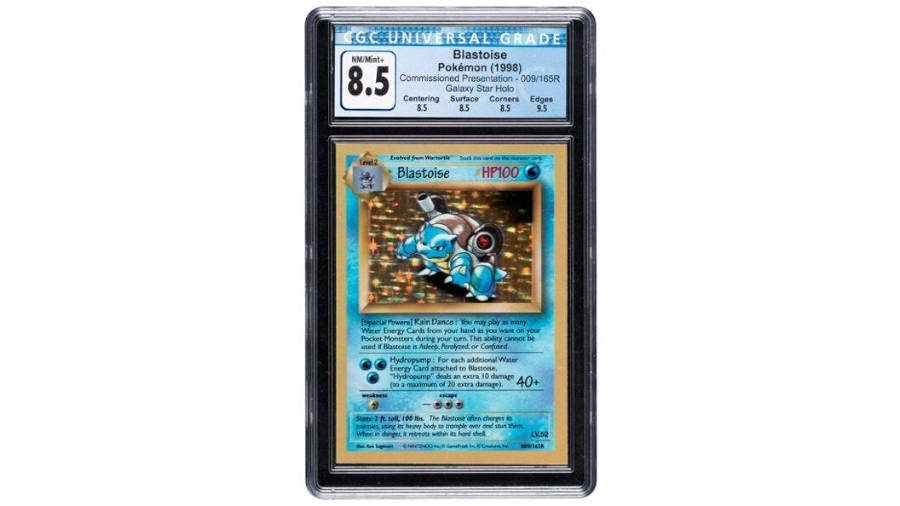 The most expensive Pokémon card ever sold, ‘Presentation’ Blastoise took the heavyweight title in January 2021, fetching a fine $360,000 / £260,000 at auction. Although Blastoise doesn’t command the same fan adoration as Charizard or some of the other first-generation Pokémon, this isn’t any bipedal, turtle-like, walking cannon. The Presentation Blastoise was originally printed by Wizard’s of the Coast as a demonstration piece, used to pitch Nintendo the value of producing an English variant of the already successful Japanese trading card game.

The most expensive Pokémon card ever sold

Although a prototype that features different fonts, a missing water energy symbol, and misspellings, it’s little wonder the card was so prized. With a role in sparking the card game’s international success, the Presentation Blastoise has a place at the centre of the Pokémon TCG’s history. Only two Presentation Blastoise cards were produced, with the location of the other card not publicly known, and auctioneers still questioning its present existence. 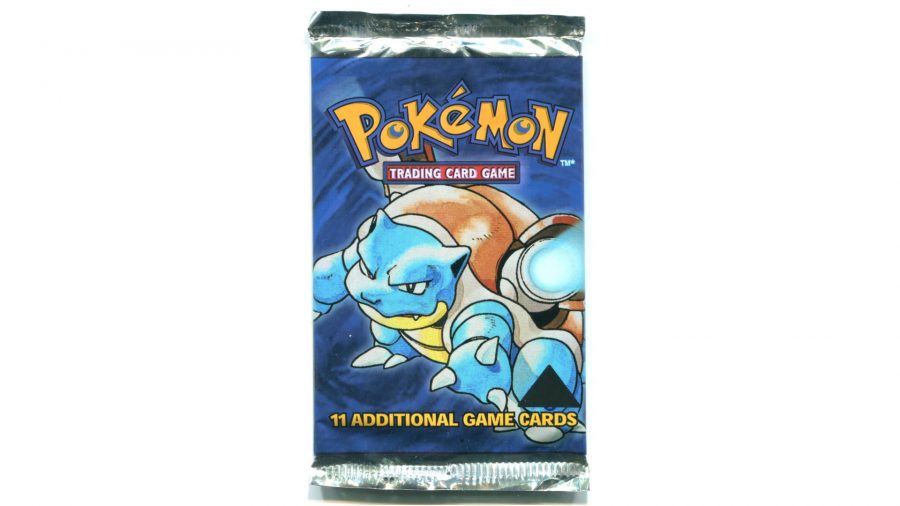 Not all manufacturing processes go to plan, and when Wizards of the Coast realised they had accidentally printed too many Base Set booster packs branded with the first-edition logo, they covered the errant symbol with a small black triangle. A simple attempt to avoid wasting resources has generated a much-prized collector’s item, as fans now collect the packaging of these old boosters.

Broad appeal: These are the best family board games

But it’s the packaging itself that’s valuable, not the cards inside, so don’t go cracking one of these black triangle packs open if you happen to find one sitting in the back of a drawer. But they’re occasionally found in standard Base Set booster boxes – so you’ll have to weigh up whether to gamble on the chance discovery of one of the black triangle booster packs, or whether it’s best to leave the box unopened for its pristine value. Some of the black triangle booster packs have fetched over $2,700 / £2,000 on eBay, depending upon their condition and which Pokémon is displayed on their cover. 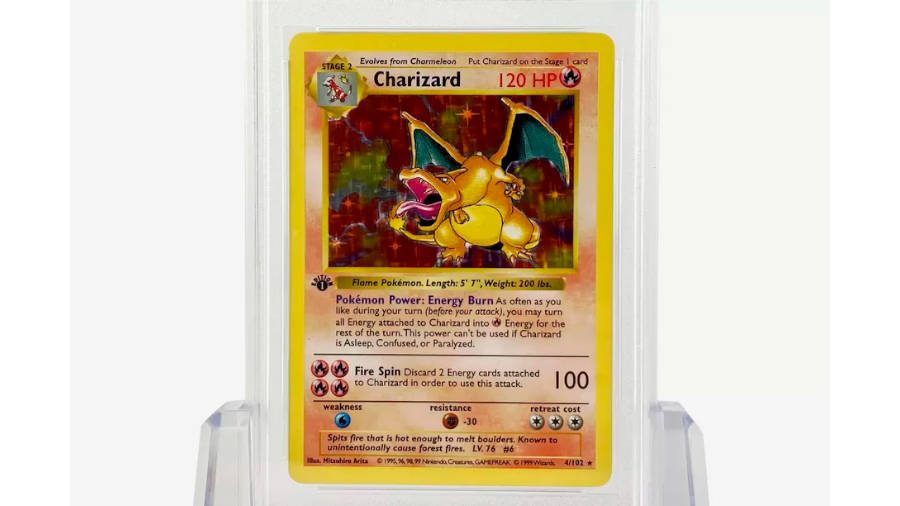 Ask a casual fan what the most sought-after Pokémon card is, and there’s a good chance they’ll answer: shiny Charizard. Perennially popular since its release in 1999, holographic Charizards have been a staple on the wish lists of collectors and fans for over 20 years.

Perennially popular since its release in 1999

The first edition shiny Charizard is particularly valued, not only for its age, limited availability, and the recognisable image of one of Pokémon’s much-loved mascots, but because of a printing error that removed the shadow from around the card’s image box. Most cards with the error were corrected or removed from sale, leaving these ‘shadowless’ Charizards all the more unique.

In October 2020, a PSA 10 mint condition first-edition shadowless holographic Charizard was bought by ex-rapper Logic at auction for a sizeable $220,000 / £173,000, only to be surpassed a month later when another Charizard of the same specifications sold for $295,000 / £210,000. That sale currently places the shadowless Charizard as the second most expensive Pokémon card in the world. 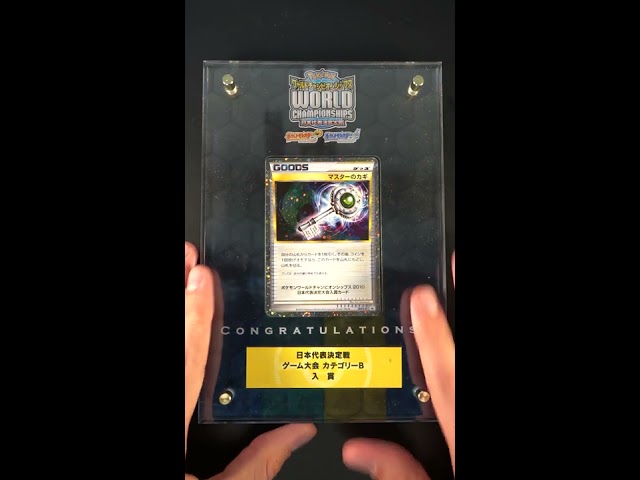 A more recent addition to the coveted halls of Pokémon rarity, the Master’s Key Prize Card was awarded to competitors of the 2010 Pokémon World Championships. Each of the 36 participants in the TCG and videogame tournaments was given the card, along with a fly display case to show off their competitive card-playing abilities. 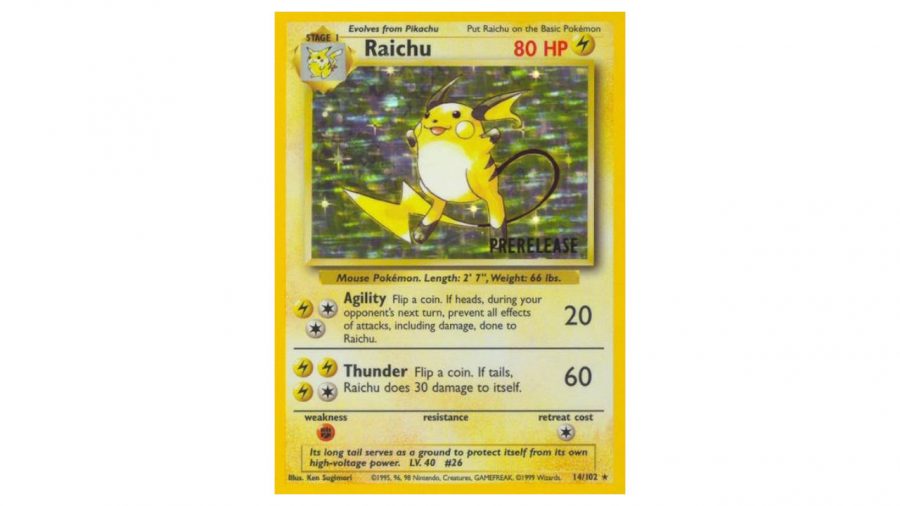 As much a legend as a rarity, myth has it that a handful of Raichu cards were wrongly printed with the word “Prerelease” stamped on their artwork in the lead up to the release of the Pokémon Jungle expansion. The faulty cards were supposedly destroyed, but rumour has it fewer than ten were, in fact, kept, distributed among Wizards’ employees, and exist now only as legend to the outside world.

Its questionable existence alone would make it a sight to behold

The mere existence of the card was denied by Wizards until 2006, when a staff member released an image of what they /claimed/ to be a genuine copy of the card. In the years since, some have claimed proof of legitimate copies, while others branded them as fakes, but no professional certification body or auction house has certified a Prerelease Raichu.

Many cards are said to be the “Holy Grail” of Pokémon, but if that moniker should be applied to anything, it should be used for the Prerelease Raichu. Its questionable existence alone would make it a sight to behold, if any supposed copy was ever confirmed to be legitimate.

Best tabletop and board game deals
Ticket to Ride