Looking for the most rare and expensive Yu-Gi-Oh! cards? Like many trading card games, Yu-Gi-Oh! is no longer a simple pastime enjoyed in playgrounds across the globe, but has morphed into a serious collector’s market. Since releasing in 1999, some cards have taken on such a reputation they sell for tens of thousands of dollars at auction. That’s no child’s play.

The rare and expensive Yu-Gi-Oh! cards are a varied bunch. Some are mint condition copies of the most recognisable cards ever released, gaining their value through their sheer popularity and reputation among the game’s fanbase. Others are promotional cards that were handed out to tournament winners and are valued purely for their scarcity. As with all collector’s items, there’s nothing better than novelty.

We’ve rounded up the most expensive and rare Yu-Gi-Oh! cards that have dared to rear their golden heads on the market. To let you down easy, we’ll tell you now: you’re unlikely to have any of them stashed away in your card collection that’s been gathering dust for the last decade. But we can gaze upon their ridiculous prices all the same. When you’re down, check out the most expensive Pokémon cards of all time.

These are the most rare Yu-Gi-Oh! cards: 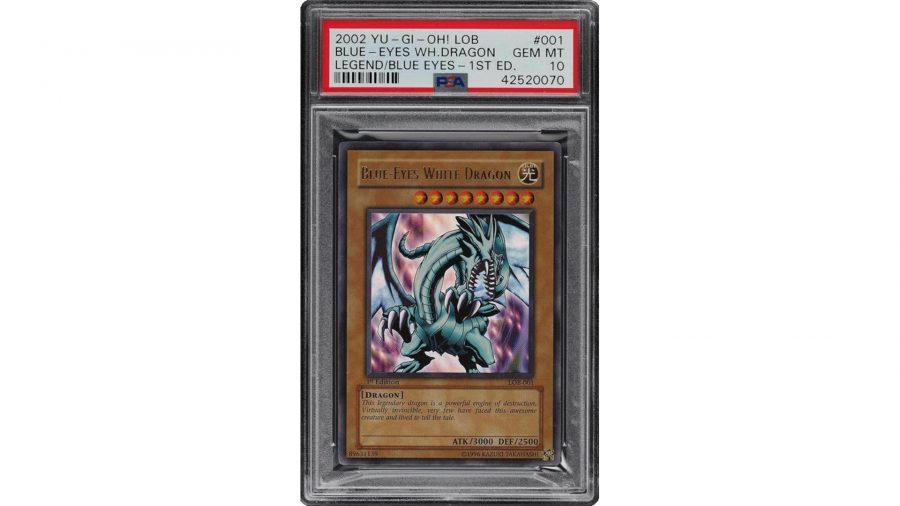 Blue-Eyes White Dragon might be the most popular Yu-Gi-Oh! card of all time. It’s certainly one of the most recognisable. A heavyweight both in the trading card game and the original anime series, it’s still sought after today, especially if it’s an ultra-rare mint-condition copy, like this one.

Released in the Yu-Gi-Oh! trading card game’s first expansion set, Legend of Blue-Eyes White Dragon (LOB), this first-edition PSA 10 Gem Mint condition card sold at auction in October 2020 for an astounding $85,000 / £65,000. That’s a whole lot of dough, but you’ll need three of them to summon the chunkier Blue-Eyes Ultimate Dragon.

Other copies of the card don’t go cheap, either. Back in June 2021, a Chinese court suspended an auction after bidding spiralled up to a wild $13.4 million / £10.1 million, as people clambered to get their hands on an ultra-rare Blue-Eyes White Dragon with a 20th-anniversary card frame. 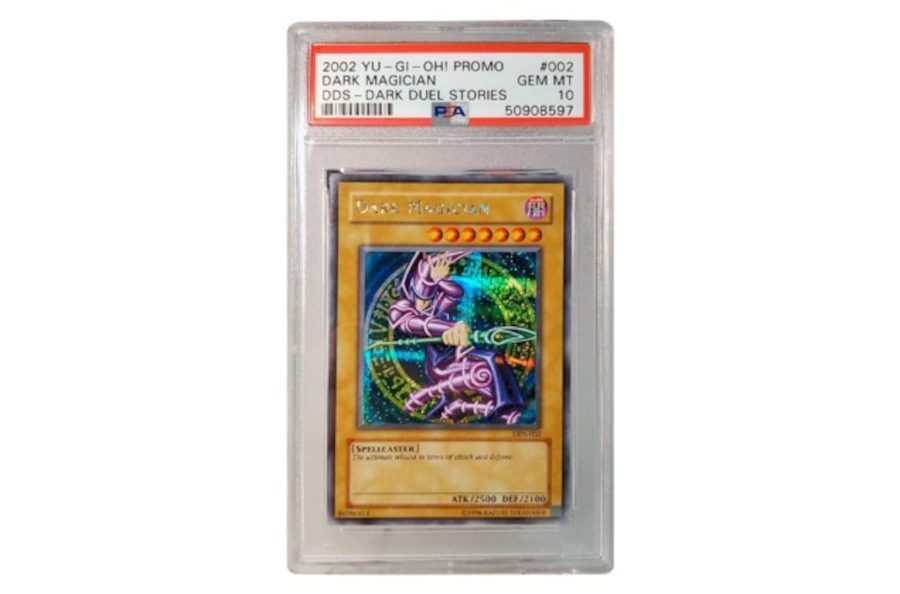 Another staple of the Yu-Gi-Oh! anime and trading card game, Dark Magician is best known as the favourite card of protagonist Yugi Muto. And with that fame comes expense, as a PSA 10 gem mint condition copy of the card, printed in the Legend of Blue-Eyes White Dragon set, was auctioned in June 2021 for $85,000 / £65,000.

Get started: Read our pick of the best Yu-Gi-Oh! structure decks

Notably, this was the Arkana variant of Dark Magician. Functionally, it’s exactly the same card, but includes a different artwork with a crimson hue and was introduced in the anime as a rival to Yugi Muto’s version of the card. 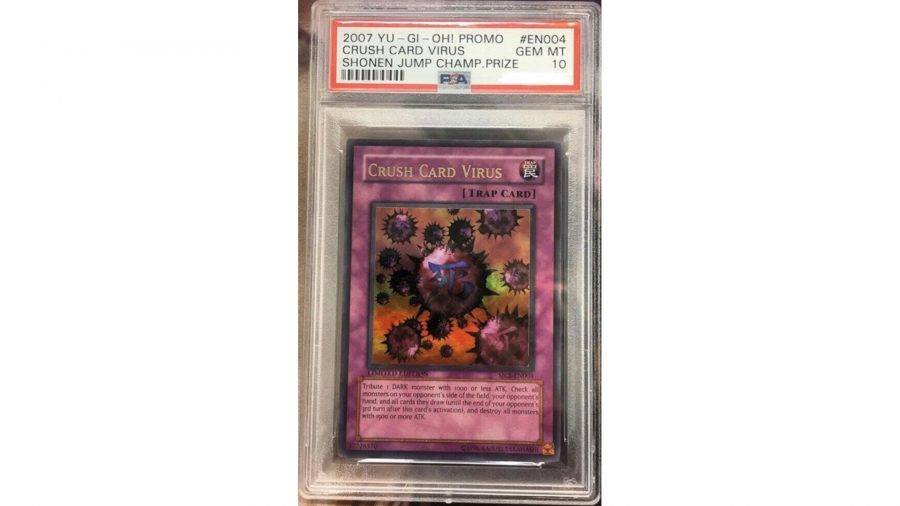 Awarded as a prize card in the 2007 Shonen Jump Championships (a series of Yu-Gi-Oh! trading card game tournaments that were later replaced by the Yu-Gi-Oh! Championship Series), there aren’t many copies of this version of Crush Card Virus around. Originally, 40 copies were produced, before a further two were made for the SJC 2008 tournaments.

It’s the scarcity of this card that makes it so valuable to collectors, more so than its functionality or popularity. In June 2020, a PSA 10 gem mint copy sold for $49,999 on eBay. Not bad for a card that’s spent most of its life sitting on the Yu-Gi-Oh! banlist. 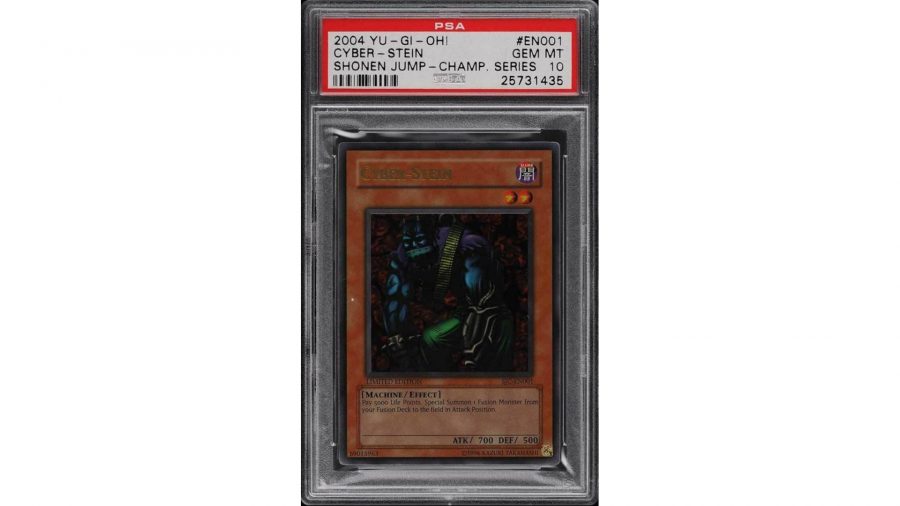 Top trades: These are the best Pokémon cards of all time 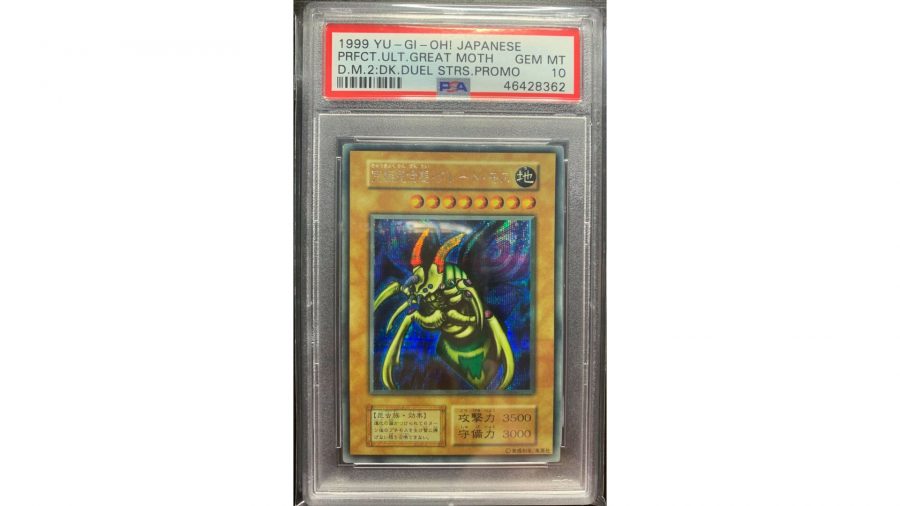 This little insect doesn’t have much renown in the Yu-Gi-Oh! community, but managed to make a name for itself in August 2021. A rare promo version of the card, released alongside the Dark Duels Stories videogame, that had been rated in PSA 10 gem mint condition sold on eBay for a whopping $29,999.99 / £22,700.

At the time of its listing, it was billed as the only gem mint copy of the promo card in the entire world, making it somewhat unique. Since then, however, trading card authenticator and grading company PSA has listed three other copies of the card to exist. 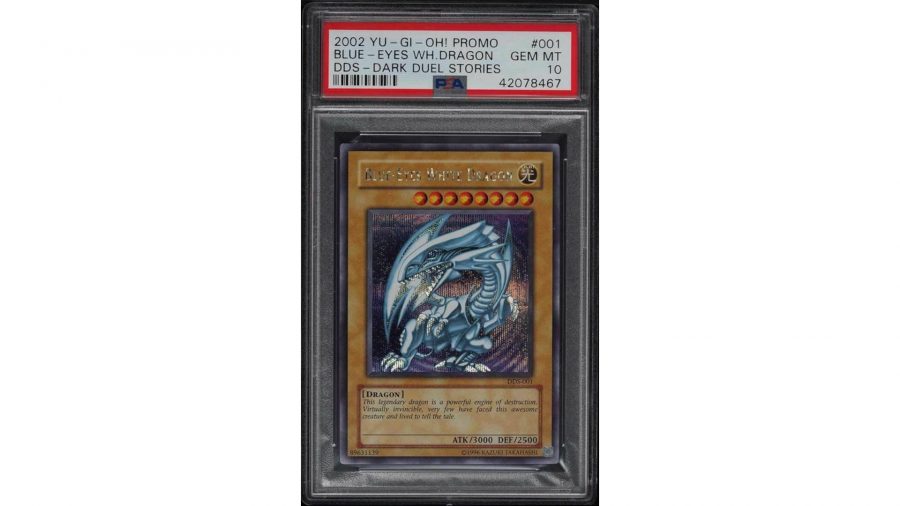 Another entry for the pallid serpent, this was one of six Prismatic Secret Rare cards released in promotion for the Yu-Gi-Oh! Dark Duel stories videogame. Two sets were created – one containing ol’ Blue-Eyes, Exodia, and Dark Magician; the other packing Acid Trap Hole, Seiyaryu, and Salamandra – and were packaged inside the Gameboy game.

Potent pocket monsters: Here are the most powerful Pokémon

This PSA 10 gem mint condition copy sold at auction in February 2021 for the not-insignificant sum of $25,100 / £19,000. Although a fair few prismatic Blue-Eyes White Dragons made their way into the world as promo cards for the videogame, few have been kept in such great condition. 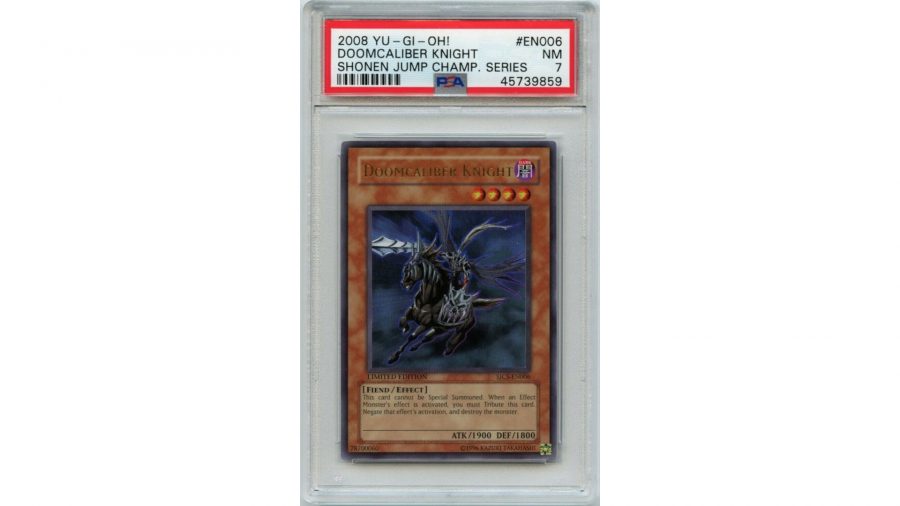 Another prize card given out at the Shonen Jump Championships, this copy of Doomcaliber Knight was handed to winners of the 2008 tournaments. Only 68 copies of the cards were ever produced, making it not only super scarce, but super coveted.

In March 2021, a PSA 7 near mint copy of the card was auctioned for $15,300. Interestingly. This is the only card that makes it into this list that isn’t graded PSA 10. It just goes to show how valuable it is. 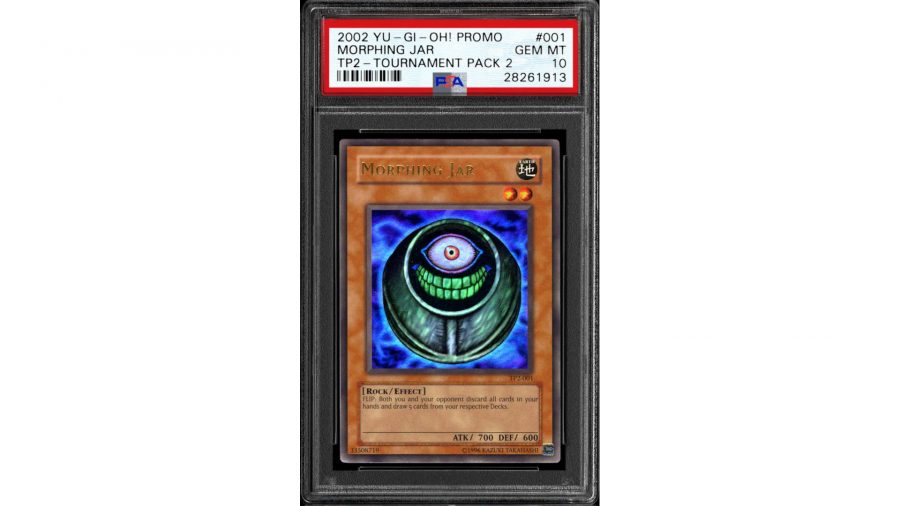 Forbidden zone: Read everything on the Yu-Gi-Oh! banlist

In Early 2021, a PSA 10 gem mint condition copy of the card sold for just under $15,000. Still, we reckon the classic Pot of Greed is the best piece of crockery to ever make its way into Yu-Gi-Oh!. 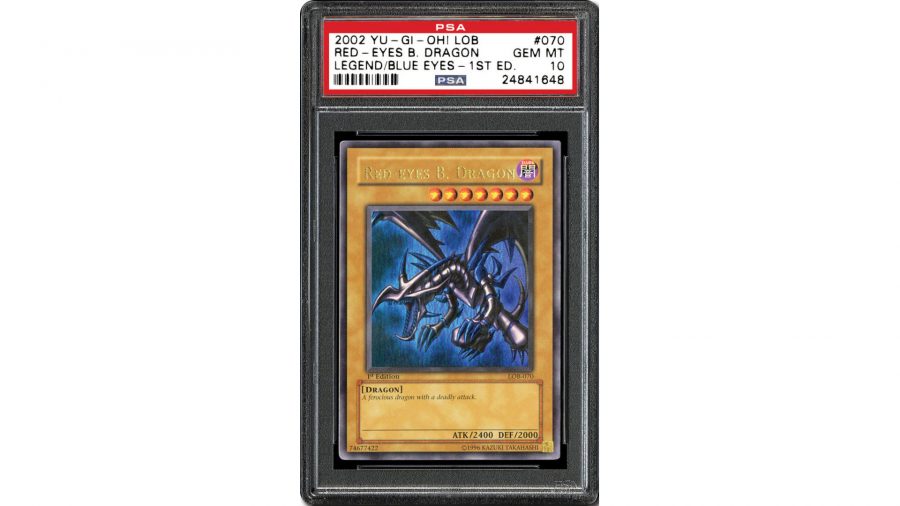 Another favourite from Yu-Gi-Oh!’s line of vivid drakes with notable eye colours, Red-Eyes Black Dragons, doesn’t have the acclaim or market value of its esteemed Blue-eyed counterpart, but can certainly hold its own. One of ten Ultra Rares included in the first Yu-Gi-Oh! set release, Legend of Blue-Eyes White Dragon, this card was a prize to find. 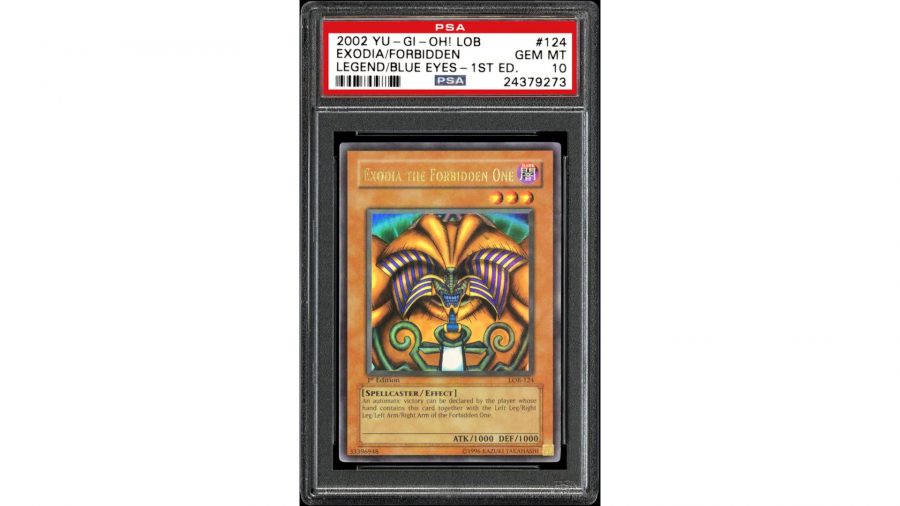 The notorious Exodia is just as prized on the collector’s market as it is by duelists in the Yu-Gi-Oh! anime. It’s the ultimate monster, created by combining five Exodia cards into a single, unmatched entity: the Forbidden One. It’s so powerful, in fact, that it grants its summoner immediate victory. No wonder that snivelling Weevil Underwood threw all of Yugi’s Exodia cards off the boat in the first season.

Charizards assemble: Here’s how to build a Pokémon deck

This copy of Exodia is particularly prized, however, for being a first-edition version that was printed in the game’s original set, Legend of Blue-Eyes White Dragon. It sold for $8,000 / £6,050 As well as being graded at PSA 10 Mint Gem condition, all five cards that make up Exodia were released as Ultra Rares, making them difficult to find regardless of their age.