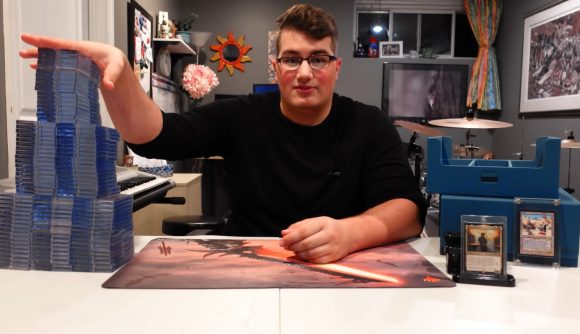 If you’ve ever felt that carting around all your Magic: The Gathering EDH decks is a bit of a hassle, then just be thankful you’re not Sam Huggins. This YouTuber had the bonkers idea of sticking each of the 100 cards in his Garth One-Eye Commander deck inside a thick, mighty plastic case. The advantage of this approach is that he can slot the cards in his hand onto elegant pedestals and peruse them at his leisure. The disadvantage is that his deck now weighs around 40 pounds and stands two and a half feet tall.

As Sam Huggins admits in his video, quite accurately titled ‘The Most Ridiculous Magic: The Gathering Deck Ever Made’, this makes it “frankly a nuisance in all realms of play”. He tells Wargamer that a seven-card hand is taller than a fully sleeved Commander deck, and that “in order to shuffle the deck in a conventional manner, you would require at least five people.”

Again, in the pro column, there’s the intimidation factor that comes from rocking up to a game with your posse of card shufflers (slash hype men) in tow, and placing a mountainous, towering deck in front of your opponent. In the con column, there’s basically everything else.

Huggins came up with this very silly concept after encountering graded card slabs. “After picking one up and holding one, all I could think about is how hilarious and stupid an entire Commander deck of them would look.” Then, at his local game store, he found magnetic, one-touch hard cases that were even thicker. “I knew immediately that I had to do it, I had to make a deck with the cases.” 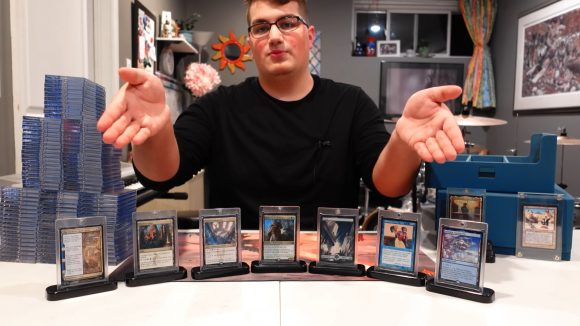 As is probably clear by now, Huggins built this novelty, jumbo-sized deck primarily to get a laugh. But he has also played with the deck several times. He tells Wargamer that when he first brought it to his LGS, Gaming Kingdom in Ottawa, Ontario, “most of the playgroups stopped playing to take a look, and a few people ended up spectating as I played the deck for the first time”.

Now it seems he’s gained a reputation as ‘the guy with the giant EDH deck’: “A lot of people are very disappointed if I don’t bring the deck with me,” he says.

Of course, this deck is not exactly tournament legal. “It’s extremely difficult to not break rules while playing it. So I only play the deck with people who are okay with that, and it being a more casual game,” Huggins explains. 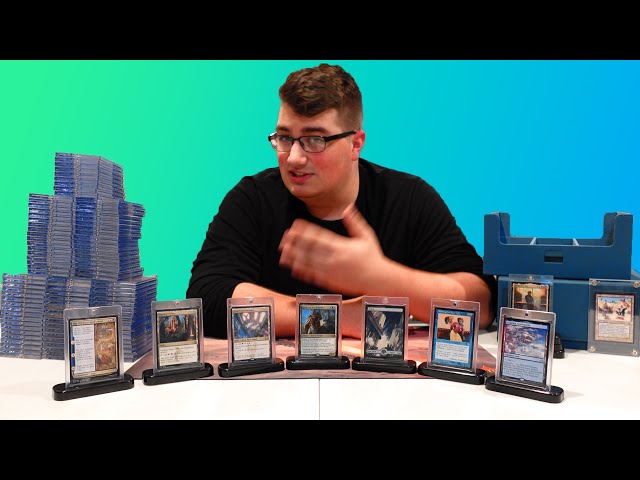 While most in-person reactions to the juggernaut deck have been positive, and Huggins says he’s had a lot of nice comments, he adds that since uploading his video he’s seen “a lot of feedback from people who are upset with me and the deck.”

“To that I say simply: I think we tend to take this game a little too seriously. This is a hobby game about painted cardstock. Some people may enjoy different aspects of the game, or find enjoyment playing it differently, and that’s okay. Is something like this dumb? Sure. Tournament legal? Of course not. But that’s not at all the point.”

If you want some help improving your Commander win rate, you could try sticking all your cards in thick, impenetrable cases. But if that doesn’t work out, the next logical step is to check our guide to the best MTG commanders. If you’re in a mood for more tales of over-the-top EDH exploits, have you heard of the man who’s trying to build a deck for every commander in Magic?