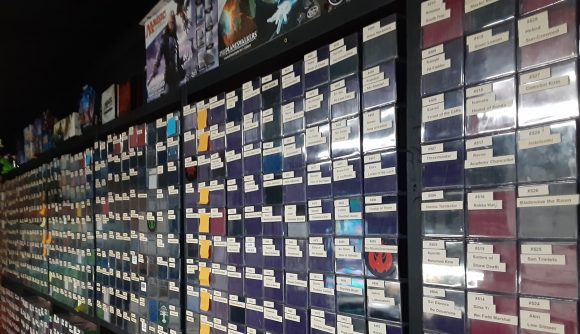 Brian Canada is a man on a mission. He wants to build a Commander deck for every single legendary creature in Magic: The Gathering. It all started around six or seven years ago. Canada was at the counter of his local game store in Tennessee, umming and ahhing, trying to pick between two commanders for a new deck. Seeing what he was doing, his friend was confused. “I thought you were just going to build them all,” he said. At the time, there were about 700 possible commanders in MTG. “Well, I’ve already got 80 done, right?” Canada replied. And so, his quest began.

Brewing 100-card Commander decks at a ferocious rate, Canada, now 47, and recently retired from running grocery stores, owns 891 EDH decks in total – all complete and ready-to-play off the shelf. “My goal is a deck a day,” he says. “If not, I consider myself behind.”

Canada’s taken to documenting his journey on his YouTube channel Cure for the Common Game. He used to make a video every other day, but found he wasn’t keeping pace with Wizards of the Coast’s rapidly accelerating release schedule. As Wizards keeps making more cards, the end goal keeps moving, so while Canada blew past 700 decks long ago, there are now 1300 to be built. But he is unperturbed. “I’m well over halfway,” he says.

To catch up, Canada must make the most of the gaps between set releases. Streets of New Capenna arrives on April 29, and Canada says there are 32 legendary creatures among the Standard and Commander cards, less than in the previous set. “If I can produce, build a deck, and publish it every single day, that’s 32 days from the date that New Capenna comes out, and that will give me time,” he says. “That’s where I’ve got to make ground.” 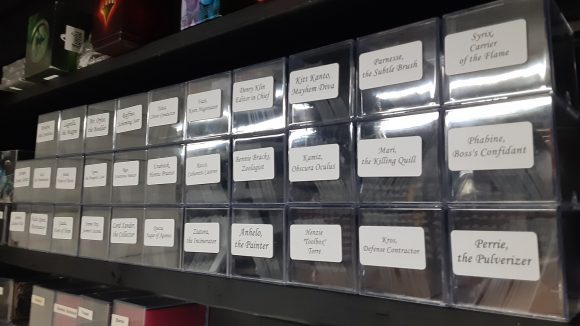 Despite the fact that it means another month or more of deck-brewing, Canada likes spoiler season as much as any Magic fan. He says as he reads card spoilers and plans out new decks – prebuilding most of them before the cards arrive – “I still catch myself getting excited about it.”

Though he doesn’t always hit his ‘one a day’ target, Canada is fastidious in pursuing his goal. He doesn’t take shortcuts, and doesn’t use proxies or break down old decks to make new ones. He also keeps all his Commander decks legal. “As they ban and unban cards, I have to go back and adjust those decks,” he explains.

Reprint-proof: Everything to know about the MTG Reserved List

Why take on this mammoth task? Partly because, as Canada admits, he’s a born completionist. Before he found Magic, in around 1994, he was a voracious collector of baseball cards. But the main reason for building so many decks is a simple one. Canada loves variety.

“If you play the same deck over and over and over, it gets old after a while,” he says. “We play a game with over 25,000 game pieces. They interact in weird and quirky ways. Getting to explore all the different combinations, literally all of them, the combos and stuff like that. I love that aspect of it.”

Despite owning around two million MTG cards, Canada says he doesn’t spend more than the average avid Magic fan. Instead, his immense collection has simply built up over a long stretch of time. “I’ve been playing this game since 1994. I’ve never gotten rid of cards, and I’ve pretty much been the one to buy collections when other people get out,” he explains. 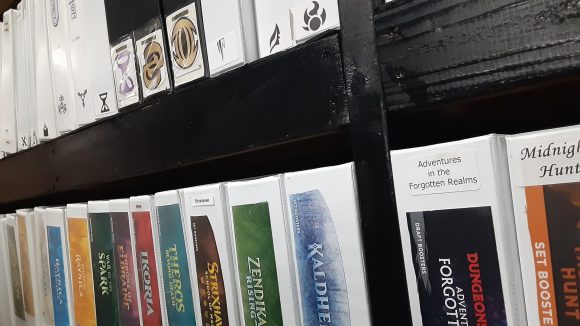 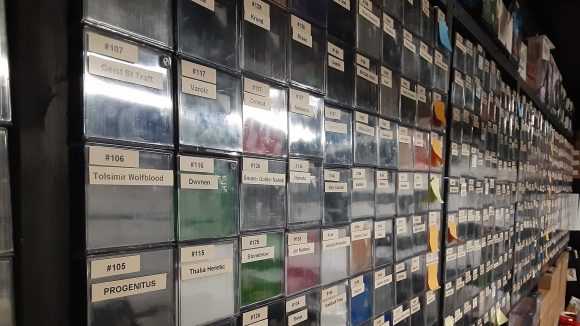 The real cost comes from buying all the sleeves and deck boxes Canada needs to organise each of his decks. As with all hobby projects of this scale, proper storage is important. Every deck is sleeved up, in its own deck box. Canada owns a binder for each Magic set, and plenty of boxes for ‘overflow’. “Organisation is very, very key when you’re dealing with this many cards,” he says.

It’s worth the effort though, to have so many options when it’s time to play games. Weekly MTG night at Canada’s house sounds like a trip to the Commander candy store. A vast wall of ready-built EDH decks awaits. “Some of the best games are when we just randomly roll dice for decks off the wall and play whatever ever number you roll.”

Building a deck for each and every legendary creature is sometimes tricky – as many were clearly not designed to pilot an EDH deck. Of course, the older legend cards were created before the Commander format was even invented. “Nobody else is gonna build that deck,” Canada says, “but they fall within my guidelines.”

Canada likes this aspect of his mission, however. “It makes me get very creative. The challenging decks are way more fun to build because, what am I going to do? How am I going to build this deck? How am I going to make this work? I like that challenge.” Canada also enjoys mixing things up from time to time – as only an EDH player can – constructing decks from cards all featuring facial hair, for instance, or based on particular letters of the alphabet. 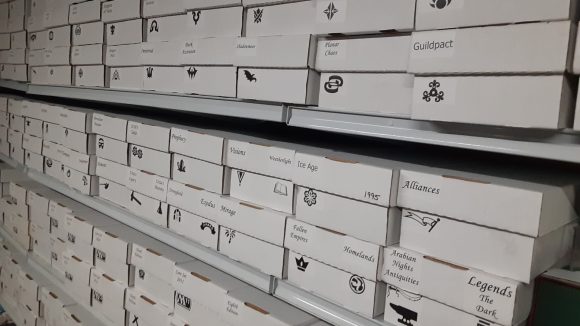 The Partner mechanic, introduced in 2016, poses a potential problem for Canada’s plan, as it allows multiple creatures to lead a Commander deck at once. “Every time they print a partner, the possible partner combinations go up exponentially. Right now there’s like 1400 possible combinations.” Even Canada has a limit. “I can’t do that. Nobody wants me to do that,” he jokes. The solution is simple. Each partner gets used once, and only once.

At Wargamer we feel the increase in MTG product and endless spoiler season of recent years has been a positive for the game on the whole, but if you’re a completionist like Canada, it can make it hard to keep pace. “I think that the number of legends they’re putting out with each set is a little much now,” he says. “Every set has 30 or 40 new decks that I’m building. I don’t mind, I’m going to build the decks anyway. But it does keep me from finishing the older ones.”

When asked what he’ll do if and when he finally hits the target and has one Commander deck for every eligible creature, Canada points out that he can’t rest on his laurels. “I will only ever be finished until the next set comes. It will be brief periods of time that I’ll be finished – and then, I get to go back and update them all!”