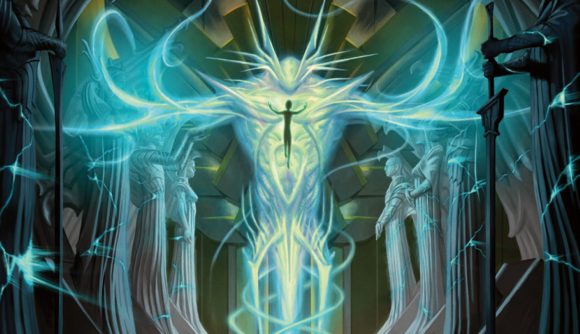 The new Magic: The Gathering set Streets of New Capenna is still weeks away, and only a few handfuls of card spoilers have been shown to us. But hardworking Magic fans are already brainstorming up wacky ways to break them. Even at this early stage, fans are tirelessly panning for gold, seeking that most coveted of MTG achievements: the infinite combo.

In Magic, a combo is formed when card effects chain together. If this is done in such a way that a loop is formed and an effect can be repeated ad infinitum, generating infinite mana, dealing infinite damage, creating infinite creatures tokens – whatever the case may be – then voila! You’ve got yourself a bona fide MTG infinite combo. Enjoy it.

While we’ve spotted no game-breaking Streets of New Capenna infinite combos that could (legally) make it into a Standard Magic: The Gathering deck, fans are mixing the newly spoiled cards with cards from MTG sets of bygone eras, and dreaming up all kinds of ridiculous, unbeatable loops. You could, theoretically, chuck a few of these into a Modern, or Commander deck. It might not be optimal, or even particularly good, but when it works, an infinite combo is sure to be glorious. Here are three of the best ones we’ve seen so far.

First up is a potent two-card combo, shared by Facebook user Hong Siong Yoong, that could net the user infinite mana on turn 3. All you need is a Devoted Druid from 2008’s Shadowmoor set and the Streets of New Capenna legendary artifact, Luxior, Giada’s Gift. Equip that sword to that elf and now, each time you put a -1/-1 counter on Devoted Druid to untap it, Luxior negates the loss of toughness from the counter, so you can keep untapping and generate as much green mana as you like. 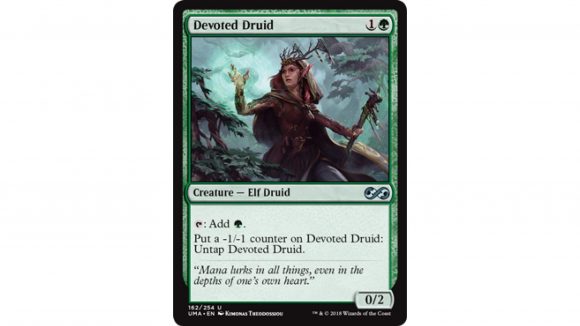 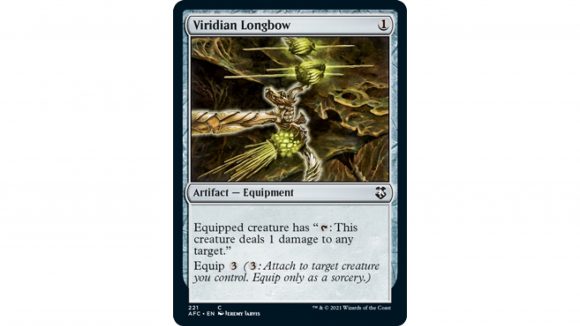 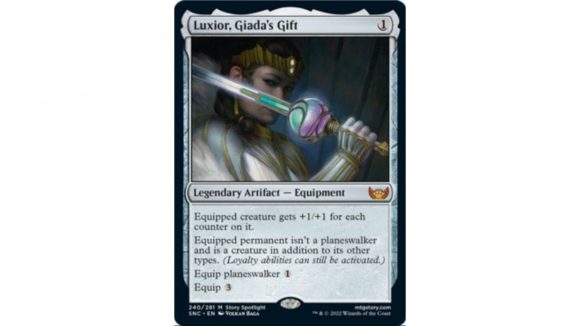 Winning the game from there should be child’s play, but if you want style points, throw a Viridian Longbow into the mix and you can ping your opponents for infinite damage, dealt one point at a time.

Folks on the r/MagicTCG subreddit put their collaborative combo-devising caps on when Halo Fountain was spoiled last week, and users such as Lykrast and TheSailorBoy soon theorised plenty of ways to go off. You can build your own infinite combo for this one, as a lot of the parts are interchangeable. You simply need a creature that taps for two white mana, and a creature like Kelpie Guide or Clever Conjurer that can untap the Fountain after it’s activated. Hey presto – you’ve got a free ticket to draw infinite cards. A creature that can produce more mana, like Incubation Druid, will also produce infinite mana at the same time. 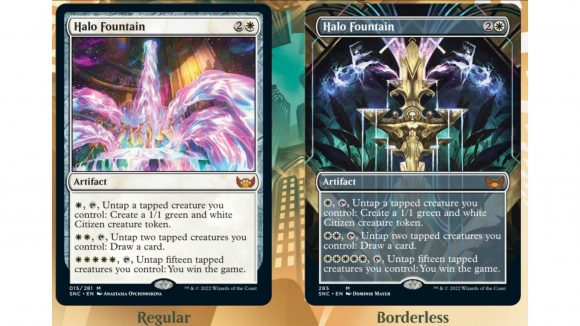 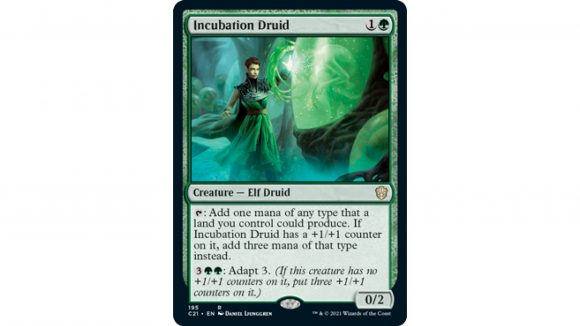 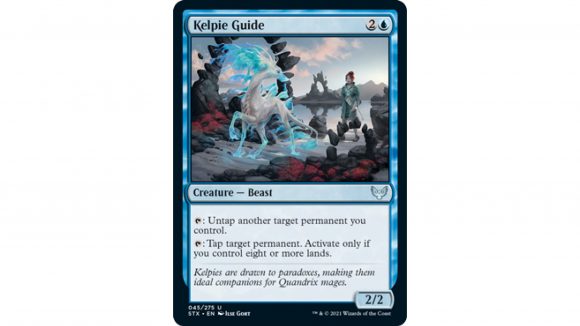 You could actually do this in Standard with the card Accomplished Alchemist, if you also manage to gain life on the same turn. It’s not likely to happen before you’re squished by Naya Runes or another of the best Standard decks, but it is feasible!

Alright, hopefully you’ve warmed your brain up because this final combo, which comes courtesy of Twitter user @BomattCourier, is stupidly, wonderfully convoluted. It involves Planebound Accomplice and the new Streets of New Capenna planeswalker: Vivien on the Hunt. You just need the former out on the field, Vivien in your hand and one red mana going spare. Below you’ll see all the cards involved. Now, let’s break it down step by step. 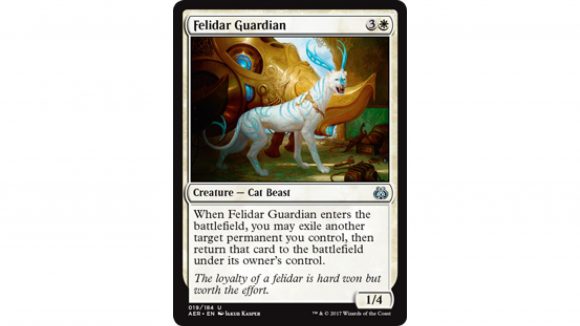 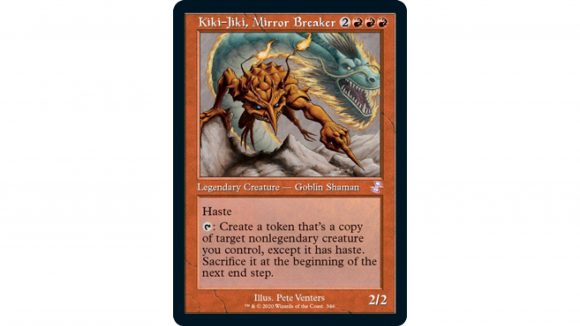 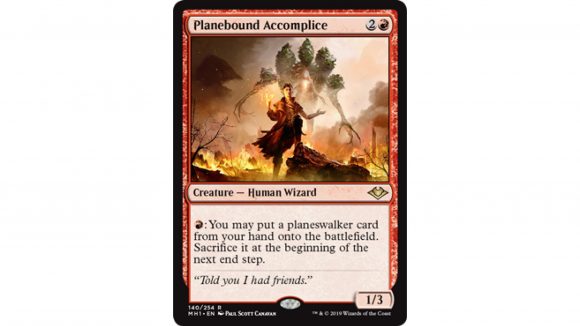 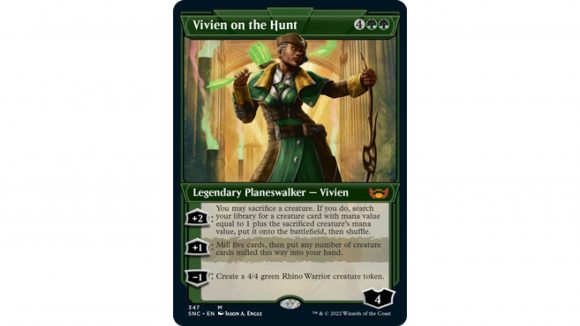 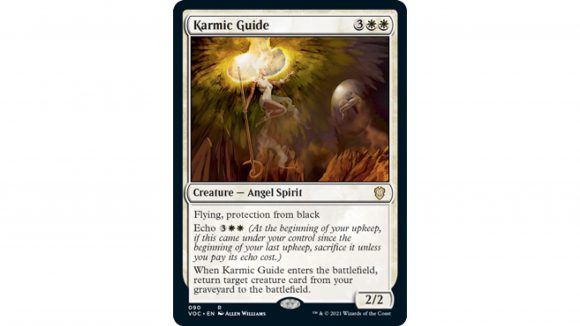 It’s not clear that this would be in any way better than the other ridiculous strategies that dominate the Modern meta, but we do so love these kinds of silly shenanigans!

Here’s all you need to know about Streets of New Capenna before the global release date on April 29. And if you’re in the mood to get silly with Magic: The Gathering, check out the foolishly high prices of the rarest and most expensive MTG cards.