The Eldrazi are some of Magic: The Gathering’s most popular villains. With strange forms, unknowable aims, and a whole lot of tentacles, they add an enjoyable splash of cosmic horror to the TCG. The three Eldrazi Titans are basically the Elder Gods of the MTG multiverse, interdimensional beings that float from plane to plane, sucking up mana like a slurpee, unleashing loads of smaller Eldrazi minions as they do so, and destroying entire planes at a time.

Enormous and almost unstoppable, the MTG Eldrazi are a truly terrifying threat. A more than worthy opponent for Magic’s powerful planeswalker protagonists, they’ve wreaked havoc across multiple planes throughout the game’s story. As you might expect, the Eldrazi have also appeared on some wild and wacky cards in the TCG, including some of the very largest and most powerful colourless creatures ever printed in Magic: The Gathering.

This guide will fill you in on who the Eldrazi are (as far as we can tell), what they’ve been up to so far, and where they are now. We’ll also take a look at the best MTG Eldrazi cards currently available. 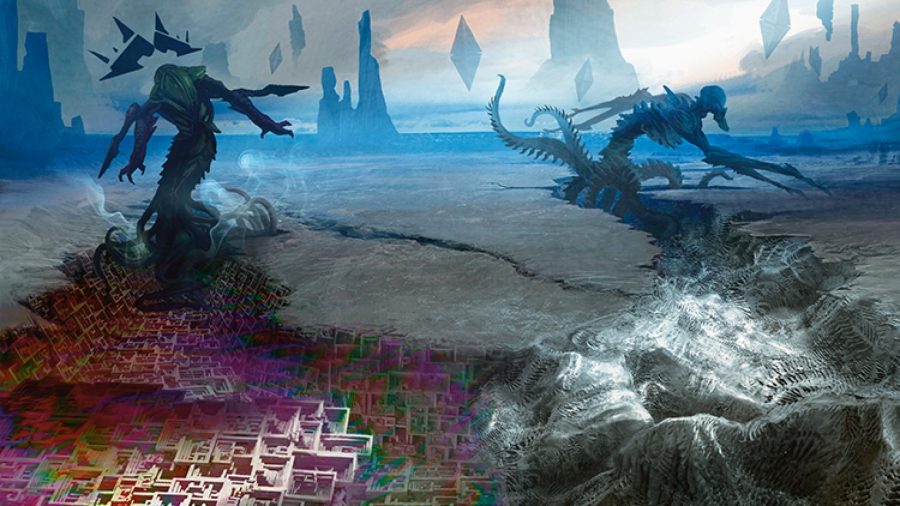 Who are the Eldrazi?

The Eldrazi are an alien-like race of three creatures who live in the space between planes known as the Blind Eternities. They have no mana colour, and don’t technically have a physical form, but when they manifest on a plane they appear as monstrous titans, enormous creatures each with a wriggling nest of tentacles for a lower body. Each one also creates an Eldrazi ‘brood’, as an extension of itself, little (or sometimes very large) Eldrazi mini-mes that act as drones, furthering the Titan’s aims.

The Eldrazi warp and consume whatever plane they appear on, which is obviously a bit of a problem for that plane’s inhabitants. So far we’ve seen them on Zendikar and Innistrad, and they had a pretty dramatic effect on both planes.

The Eldrazi first appeared in Magic: The Gathering in the 2010 set Rise of the Eldrazi, when it turned out they’d been trapped on the plane of Zendikar for millennia by structures called hedrons, and were now suddenly free. They were eventually defeated in the Battle for Zendikar set, in a big showdown battle that is the origin of the Avengers-like planeswalker force, The Gatewatch.

It may be that the Eldrazi, horrible though they seem, have some grand beneficial purpose, as the friendly and wise spirit dragon Ugin has advised against destroying them. That intriguing detail has led to a whole lot of theorising from Magic fans. 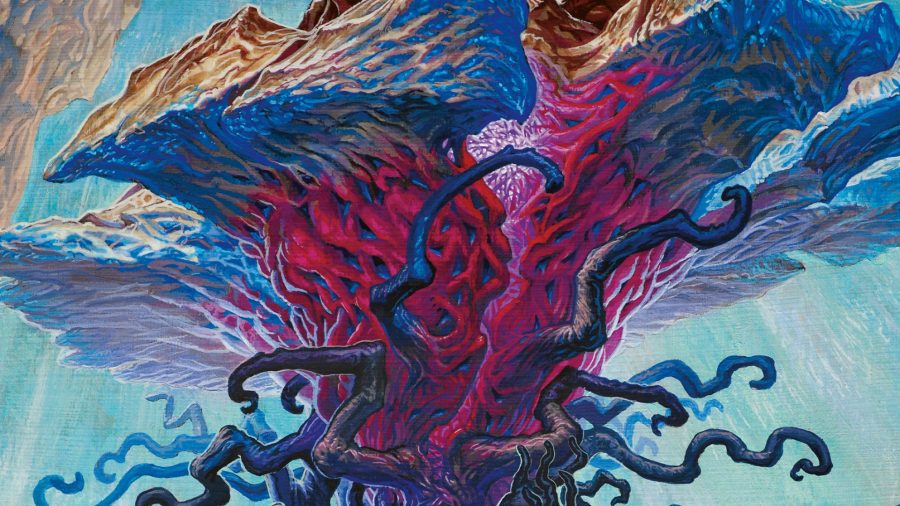 The Eldrazi Titans – Ulamog, Kozilek, and Emrakul – are the three big Eldrazi that the rest of the race stem from. Though each works similarly to consume planes, each one has a different appearance and effect.

Ulamog has a bonelike, featureless head and two purple arms that split into four at the elbow. He and his brood destroy everything they come across – organic and lifeless matter alike – and create deadly and deeply unpleasant plagues.

Kozilek has the most human appearance of the three Eldrazi Titans, though lacking a head, having tentacles for legs, and being the size of a skyscraper means you’re unlikely to mistake him for someone else, unless it’s really dark. Actually, you might, because Kozilek’s powers involve warping reality and perception, causing madness, waking nightmares, and changing thought and emotion.

Emrakul meanwhile, is not humanoid at all, but instead resembles some kind of fungus, sponge, or jellyfish – again with the trademark tentacle limbs. Her powers involve warping biology, causing mutation or corruption in living matter wherever she goes. 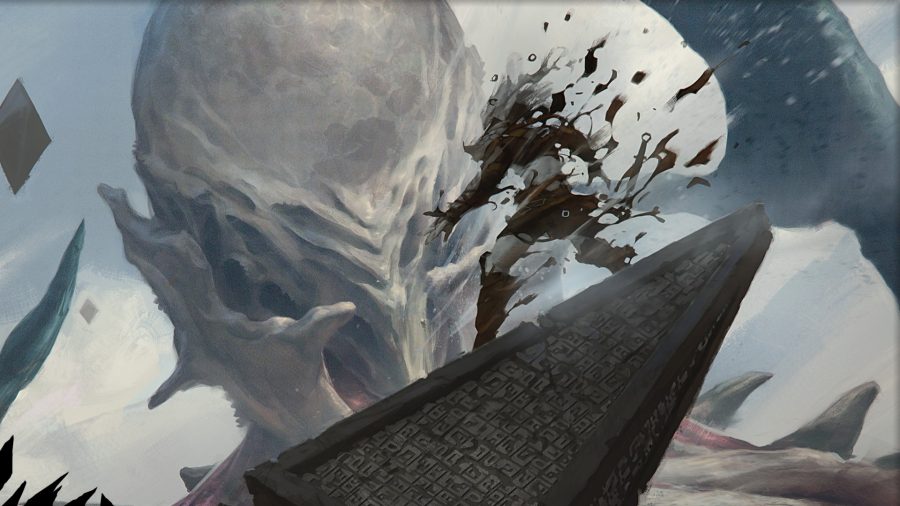 What happened to the Eldrazi?

Currently, two of the three Eldrazi titans are dead, and the third is trapped. Ulamog and Kozilek were seemingly killed by the Gatewatch in the Battle for Zendikar, while Emrakul left the plane.

She was then summoned to Innistrad by Nahiri to take revenge on the vampire Sorin. Once there, she caused all the gothic horror inhabitants of that plane to twist into Lovecraftian horrors, and then took up residence in the moon, allowing herself to be sealed away. 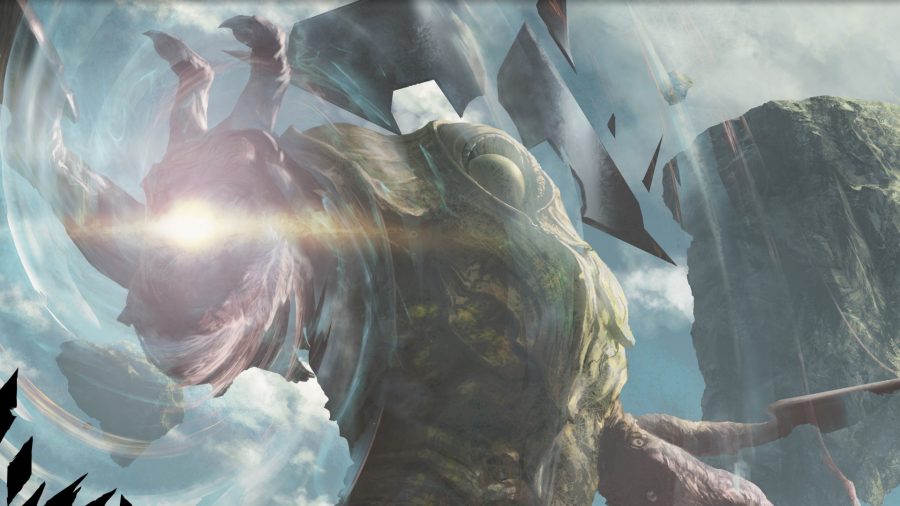 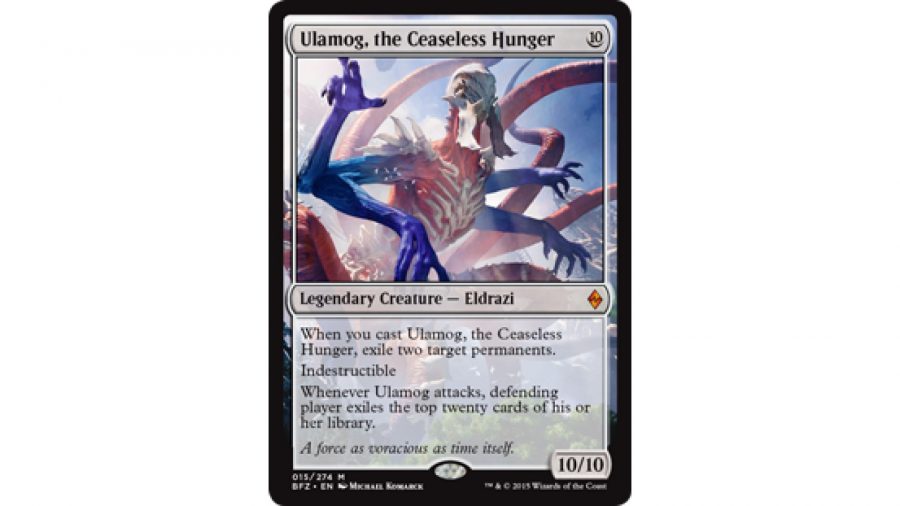 Most big Magic cards get even better when you can cheat them onto the field, but you really want to cast Ulamog, the Ceaseless Hunger (and most of the other top Eldrazi cards) so be sure to load up on ramp spells. The card really makes a splash when you can pay the 10, exiling two permanents. Any kind of permanent can be hit, from artifacts to lands, making this card an answer to whatever your opponent is up to. If not dealt with swiftly, Ulamog will run away with the game, either destroying your opponent’s life total, as a 10/10 Indestructible creature, or milling them out with its ability. 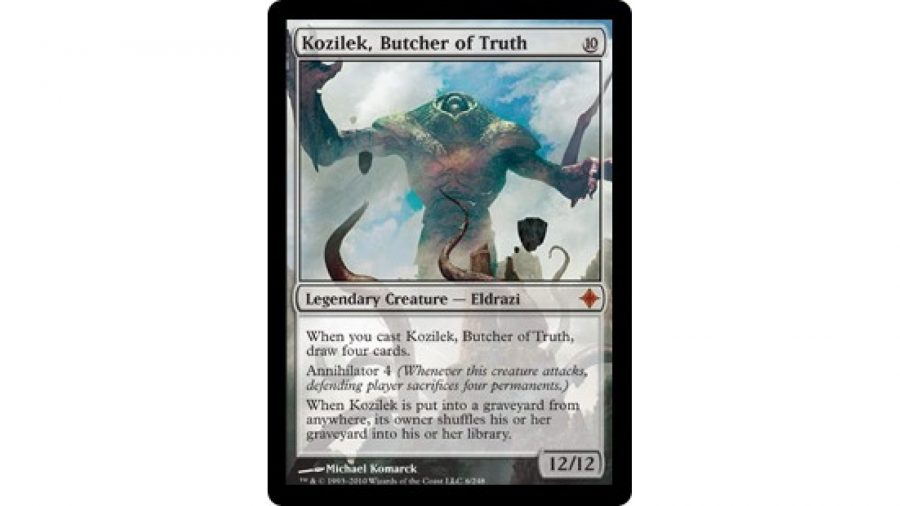 ‘Annihilator 4’ is an absolutely terrifying bit of text to see printed on a card. It means each time Kozilek, Butcher of Truth attacks, your opponent must sacrifice four permanents. Unless they have a gazillion tokens, this will decimate most boards, and if your opponent has to sacrifice lands, you’ve got them on the ropes. Kozilek also restocks your hand – a very nice bonus. 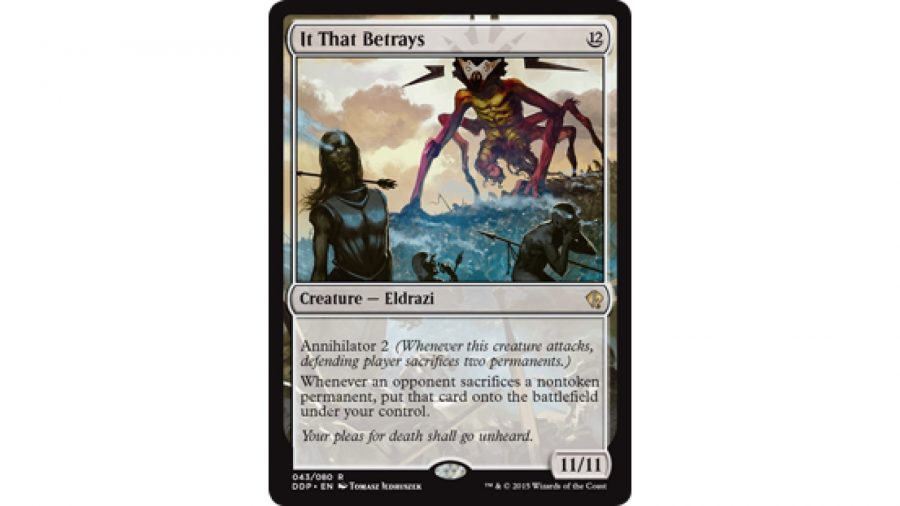 If you were trusting this fella, you really only have yourself to blame. 12 mana is a big price to pay, but It That Betrays is one of the Eldrazi cards that doesn’t have a ‘when you cast’ ability, making reanimation spells the order of the day. It’s an 11/11 that destroys your opponents’ creatures, and lets you take control of them. What more do you want? 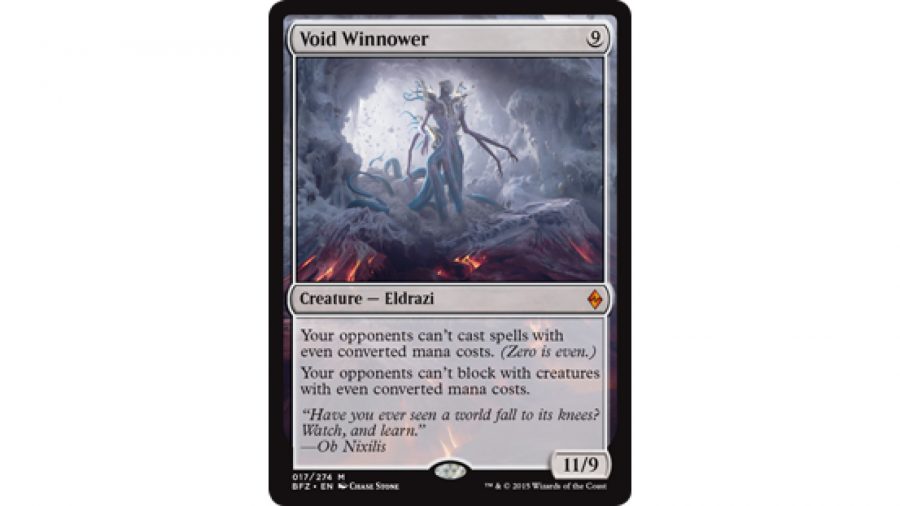 An extremely powerful card that’s also extremely irritating to play against. Being able to attack through all even-costed creatures as though they weren’t there is a huge boon, but shutting your opponents down from casting any even-costed spells is even better. Often they’ll have an answer to Void Winnower in hand, but if it’s a card that costs two, four, six, or eight mana, that’s where it’s going to stay.