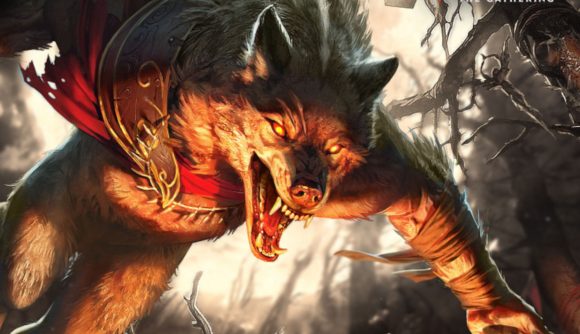 Following last month’s release of Adventures in the Forgotten Realms, and the recent reveal of MTG Arena’s Jumpstart: Historic Horizons, Wizards of the Coast looks ready to tease the next Magic: The Gathering set release. A preview of Innistrad: Midnight Hunt will be shown on Twitch at 2:30pm PST / 5:30pm EST / 10:30pm BST today, August 5, as revealed by the official MTG Twitter account yesterday.

While the Tweet gives few details on what to expect, it styled the stream as a “special sneak peek” of the upcoming set. That could mean anything from a card spoiler, artwork previews, to discussions about the set’s new gameplay mechanics. In a similar sneak peak of Strixhaven earlier this year, Wizards revealed information about its Commander decks, including card types, mana colours, art, and surrounding lore. It’s probably prudent to expect similar reveals this time.

We’ve seen little of Innistrad: Midnight Hunt so far. Other than its setting in the titular Gothic horror plane, and its thematic focus on werewolves, its details are as much a mystery as its lycanthropes. We do, however, know the set will release on September 24, and will be paired with Innistrad: Crimson Vow, due to release two months later.

Did anyone else hear that?

We have a special sneak peek at Innistrad: Midnight Hunt coming to Weekly MTG at 2:30 PM Pacific tomorrow on https://t.co/nUzYF5lf0v! pic.twitter.com/DMJGVIMFBG

Before then, you can participate in Arena’s Yawning Portal timed event. Playing in the Standard Singleton format, it places heavy emphasis on venturing into Adventures in the Forgotten Realms’ Dungeon cards, and lets you win several of the D&D set’s card styles just for participating.