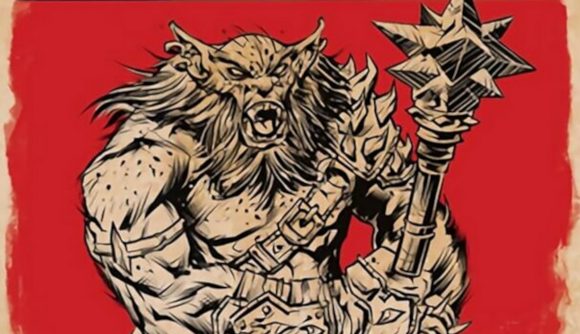 Magic: The Gathering Arena’s next timed event starts today, and offers the chance to win Adventures in the Forgotten Realms showcase card styles. Titled Yawning Portal – after the famed Waterdeep pub of Dungeons and Dragons – the event plays in the Standard Singleton format, and has a distinct dungeoneering theme.

The event’s ‘On a Quest!’ emblem will shake up the usual rhythms of play, adding the rule: “whenever you cast your second spell each turn, venture into the dungeon”. The dungeons it’s referring to, of course, are the selection of dungeon cards introduced in the Forgotten Realms set, each named after a famous D&D location and presenting a branching pathway of rooms. Each time you activate a Venture keyword (in this case, by simply playing a second spell), you’ll progress through the dungeon, triggering whatever ability lies inside the next room.

As a Standard Singleton format, the event uses all the cards of the regular Standard format, but limits you to only using one copy of each card. That means you can’t stock up on Drizzt Do’Urdens, or Minsc and Boos to whip out in a flurry.

As for prizes, Wizards of the Coast says over 25 Forgotten Realms are up for grabs, each in their ‘rulebook’ style (the set’s showcase card variant). You’ll win two cards just for turning up, and could still earn the cards by simply resigning after joining the event. 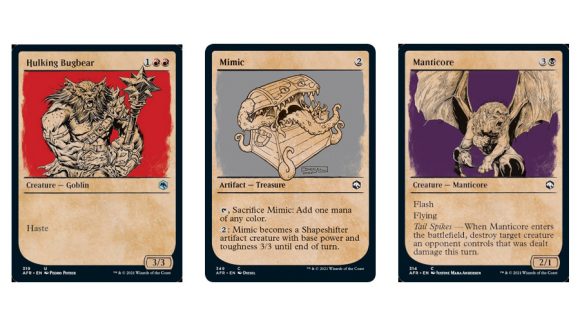 If you’re after more, however, you’ll have to win some matches: win one game to score two cards and 500 gold; win two matches to net three cards and 1000 gold; or go for three wins to clinch three cards and 2000 gold.

The prize cards are an eclectic bunch, covering a range of classic D&D monsters. Here’s the full list:

Entry into the Yawning Portal event will cost you 2000 gold or 400 gems. After three wins or three losses, your run will end, but you can always join up again. The event starts today, and will end on August 12.

Which is just time for the next MTG Arena timed event, Jumpstart: Historic Horizons. The latest version of the quick-build format – which has you combine two themed card packs into a full deck on the fly – Historic Horizons introduces cards from Modern Horizons and Modern Horizons 2. 372 of these are new to MTG Arena, and 31 are exclusively digital, using mechanics that wouldn’t be feasible on a physical tabletop.

Historic Horizons will run from August 12 to September 9, and has plenty of fans excited for its wacky thematic combinations and new mechanics.

Why not prepare yourself for the events ahead with our guide to the best MTG Arena decks, or check out the long list of free MTG Arena codes to nab some goodies.