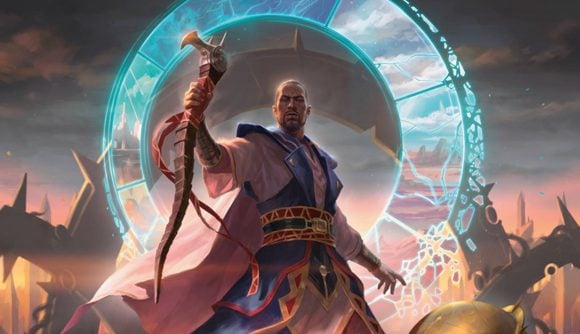 Innistrad: Midnight Hunt, the next set to release for Magic: The Gathering, is fast approaching. While we’ve already rounded up some of the best cards that have been revealed during the current spoiler season, Wizards of the Coast yesterday revealed the set’s final Planeswalker – who’s none other than the familiar, infamous archmage Teferi.

Something of a notorious Planeswalker, he first appeared in the trading card game in 2014’s Commander set as Teferi, Temporal Archmage. He then made a reappearance as Teferi, Time Raveler in War of the Spark and Teferi, Hero of Dominaria in the Dominaria set. In those later incarnations, he quickly became a staple of Standard and other formats, with many fans regularly complaining of his dominance in the metagame.

This time, it looks like Wizards of the Coast is deliberately reining in his abilities. The powers of the White-Blue Planeswalker have been designed to ape his time-magic abilities, making him “powerful but not as ubiquitous”, according to Ian Duke, a principal game designer at Wizards.

That translates into a fairly formidable range of abilities (check them out below). His +1 ability is an all-purpose, defensive buff that’ll give you a temporary advantage, while his -2 ability is a more defensive long-term spell. 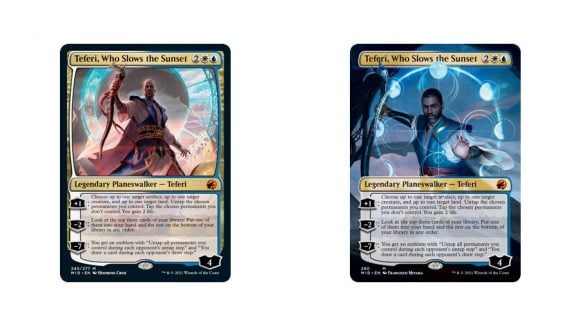 But as with most Planeswalkers, it’s his ultimate -7 ability that’s the most interesting. Creating an emblem that lets you untap your permanents and draw a card during your opponent’s draw step, it’s tailored to boosting your advantage even further. You can rely on its card flow to advance the game state, without leaving yourself vulnerable to your opponent’s attacks. Not bad.

Duke goes on to describe Teferi’s latest incarnation as “flexible and powerful, while requiring some amount of build-around to unlock its full potential.”

For more Magic goodness, read our pick of the best MTG Arena decks, or our walkthrough of how to build a Magic: The Gathering deck if you’re a complete beginner.