Awoo! Spoiler season for the upcoming Magic: the Gathering set, Innistrad: Midnight Hunt, started out strong on Thursday. Outlets from all over the Magic community previewed a bunch of soon-to-be-released cards, among them a number of particularly beastly werewolves. We had our own part to play in the proceedings, with a trio of wolfy cards to unveil.

It makes sense that the lycanthropes were first out the gate, since they’re the “face” of this set, but fur-covered fiends are not all Innistrad: Midnight Hunt has to offer. In the past couple of days we’ve gotten a better look at some of the other denizens of the horror-themed plane, and they’re a colourful crowd, ranging from slimy horrors to folk who like putting cow heads over their own heads. Yuck.

We’ve kept busy over the weekend, looking out for the absolute best previews of the bunch. Take a look at what’s new, and be sure to keep checking back, as we’ll continue to report on all the top Innistrad: Midnight Hunt spoilers in the coming days.

Here, up front, are the very best Midnight Hunt spoilers from the weekend – these are the cards we can’t wait to get our paws on: 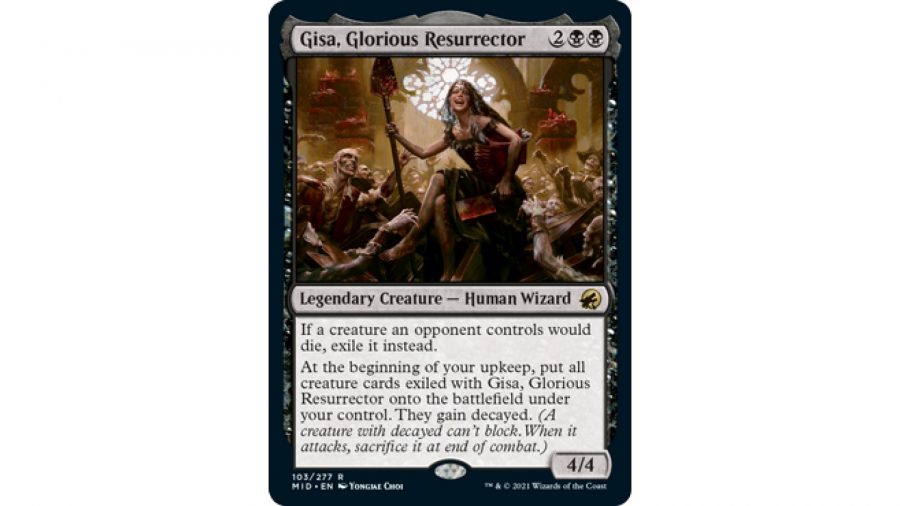 Guard your graveyards, Gisa is here! A fan favourite Innistrad character, and it’s easy to see why – just look at what a time she’s having with all those zombies.

Gisa, Glorious Resurrector is a four mana Black 4/4 that exiles your opponent’s creatures as they die, then brings them all back at the start of your next turn on your side of the field. The wrinkle is that they’re “Decayed”, meaning they can’t block and are sacrificed after they attack.

Comparisons can be drawn to the very similar Draugr Necromancer, but the fact that Gisa automatically brings creatures back, without any mana cost, seems like a major upgrade – despite her minions being less sturdy. Gisa, Glorious Resurrector is also legendary, and she looks to have the makings of a really fun Commander. 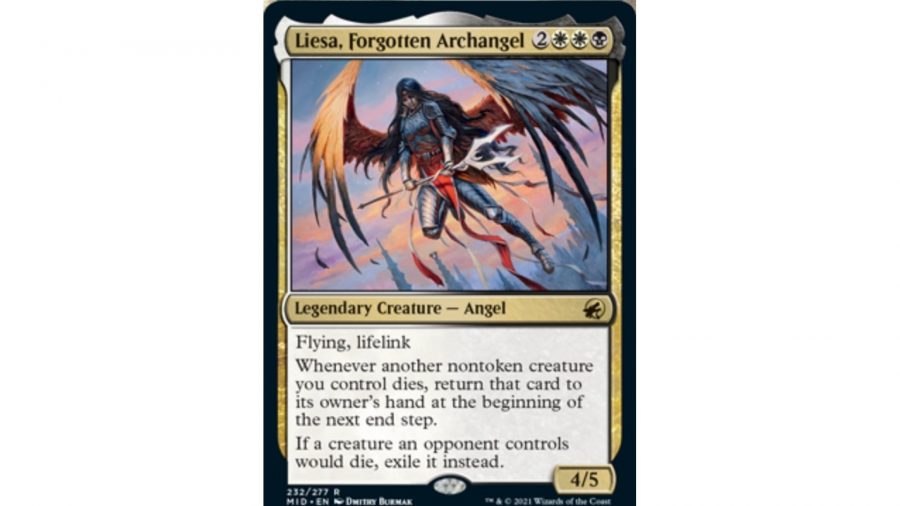 Gisa’s not the only resurrection-themed legendary creature to drop over the weekend – we also saw the supposed-to-be-dead Liesa, Forgotten Archangel, which looks like an incredible bomb in the Draft format.

A great big 4/5 flyer with Lifelink, Liesa protects all your other creatures, bringing any that died back to your hand at the end of the turn. She also causes all opposing creatures to be exiled when they would normally die, nullifying any effects that trigger upon death.

She’ll make ground combat a nightmare for your opponent, while swinging in the skies for massive damage. One scary angel. 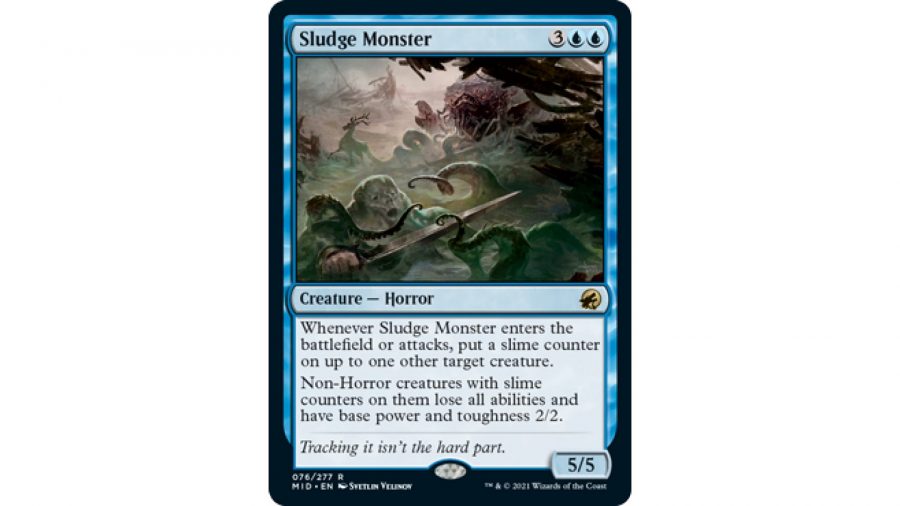 Terrifying monsters abound in Innistrad: Midnight Hunt, from parasitic leeches to rapidly spreading oozes. We’re particularly interested in this disgusting Sludge Horror, though. A 5/5 for five mana, this is a really well-costed, beefy creature for Blue. Where it gets properly exciting, however, is its ability to add slime counters to one creature immediately, and more whenever it attacks.

Paint it black: Why Kalain, Reclusive Painter is so obnoxious

These slime counters shrink opposing creatures down to 2/2s, and they also remove all abilities. We’ve seen how powerful this kind of transforming effect can be in the past, with the infamous planeswalker Oko. Here, the ability only lasts while Sludge Horror remains on the battlefield, so you’ll need to protect it well. Or just play multiple copies. 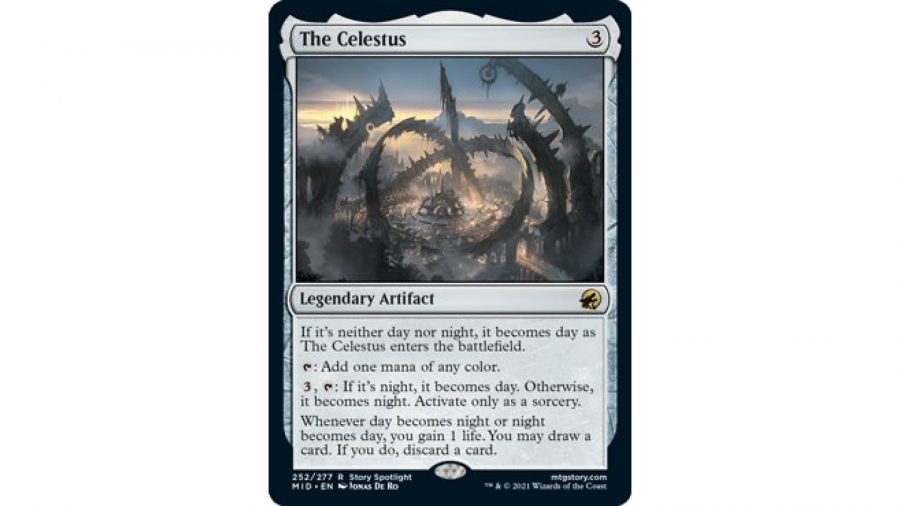 Three-mana artifacts that tap for any colour of mana are rarely this intriguing, or this difficult to parse. (Seriously, try reading it at speed.) Essentially, The Celestus works like a light switch, allowing you to turn day to night and back again. Every time this happens, you get to gain a little life, draw a card, and then discard one.

It’s not clear just yet how powerful this effect will be. It could work well in werewolf decks, triggering your Nightbound transformations, or as a tool to prevent enemy werewolves from transforming.

We’ve already seen a couple of cards that benefit from the time of day switching back and forth – Brutal Cathar comes to mind. Depending on what else is in the set, The Celestus might enable some exquisite effects – We’d definitely be surprised if there wasn’t a place for it in one deck or another. 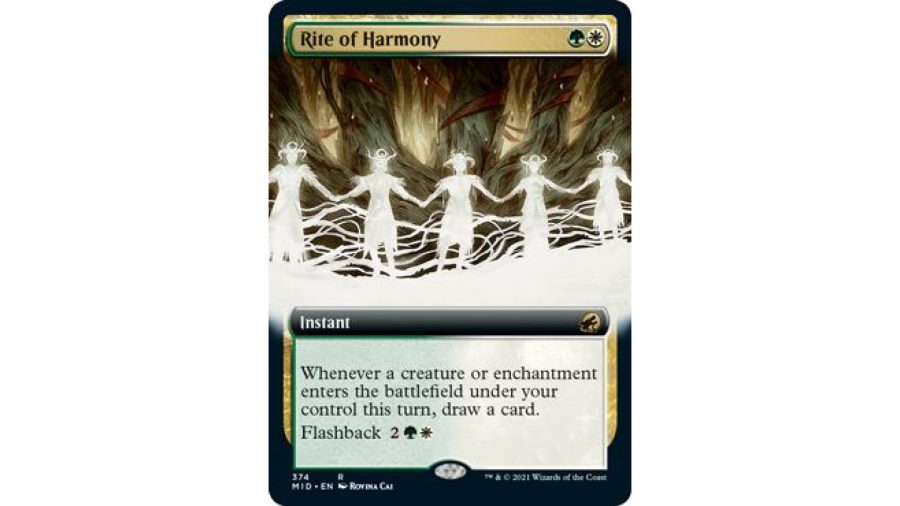 When it comes to spells, Croaking Counterpart and Defenestrate deserve a mention for comedy value alone – who says horror can’t be humorous? – and Ghoulcaller’s Harvest ensures you’ll never run low on zombies, but our pick has to be the seemingly innocuous Rite of Harmony.

History lessons: Our guide to all the Magic: The Gathering sets

Allowing you to draw a card whenever a creature or enchantment enters the battlefield in the turn it’s cast, this has the potential (with a little setup work) to totally restock your hand. It’s in colours that don’t typically excel at card draw, and seems particularly useful now that The Great Henge is rotating out of Standard. Flashback is just the icing on the cake.

A freelance writer covering all things gaming and geeky, Matt enjoys installing too many mods, and failing to finish campaigns. You can find more of his work at outlets such as Dicebreaker, The Face and Rock Paper Shotgun.