The Modern Horizons 2 Magic: the Gathering set was released on June 18, bringing with it a stack of fresh, new Magic cards – 303 of them, to be specific. A quick word of warning to the uninitiated: this isn’t your standard MTG set. Also, it isn’t a Standard MTG set.

Modern Horizons 2 is designed for the Modern format, which lets you play with cards from all the way back to 2003, meaning the power-level is through the roof. Don’t go bringing these cards to a Standard game because, while your deck will undoubtedly be the best at the table, it’ll also be illegal. You’ll have the Magic cops on your back, and those guys don’t mess about.

Modern Horizons 2 is a real crowd-pleaser, containing a mixture of much-needed reprints and intriguing new cards: some which clearly slot into existing strategies, and some which will help create entirely new avenues of play. A set designed for Modern has to really push it to the limit in order to be relevant – meaning many of these cards are eyebrow-raisingly good.

So, if you don’t play Modern, prepare to turn green with envy as we tantalise you with the very best of the shiny new, mega-powerful toys available in this set. Or consider giving the format a go!

Here are the best cards in Modern Horizons 2: 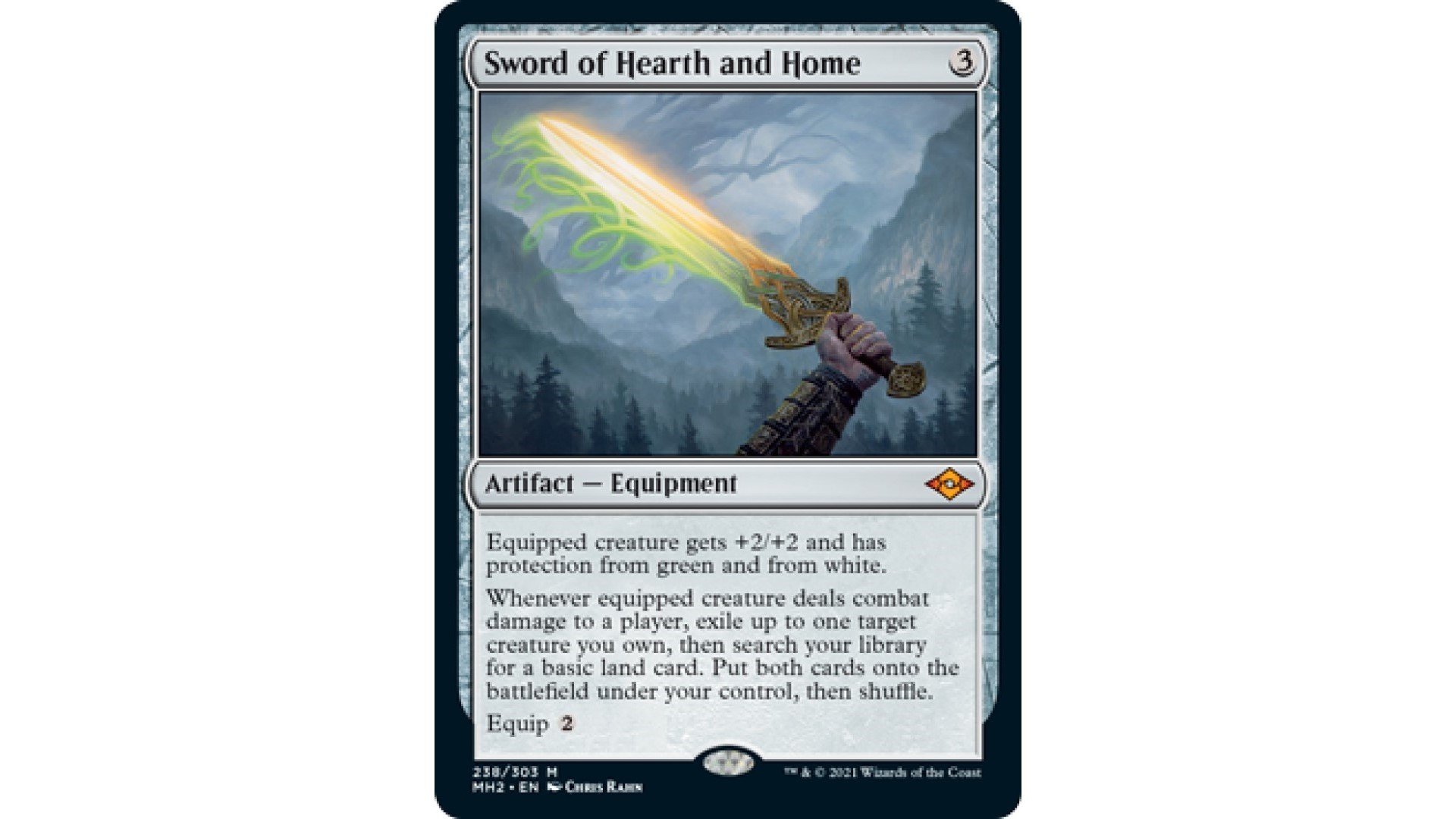 Sword of hearth and home

The Sword of Hearth and Home provides such wholesome home comforts as blinking a creature and fetching an untapped land, every single time you manage to deal player damage with it. That’s great value, allowing you to reuse powerful enter-the-battlefield effects for free, while ramping at the same time. The card has star power too, being the latest addition to a series of stabbers containing all-time greats.

Though undoubtedly strong, this card is probably a bit too slow to be main-deckable in Modern: three mana for the sword, two more to actually equip it, and then you have to get through to deal combat damage as well. That said, it’ll truly shine in Commander, where it’s likely to make it into a ton of decks, and enable some outrageous turns. 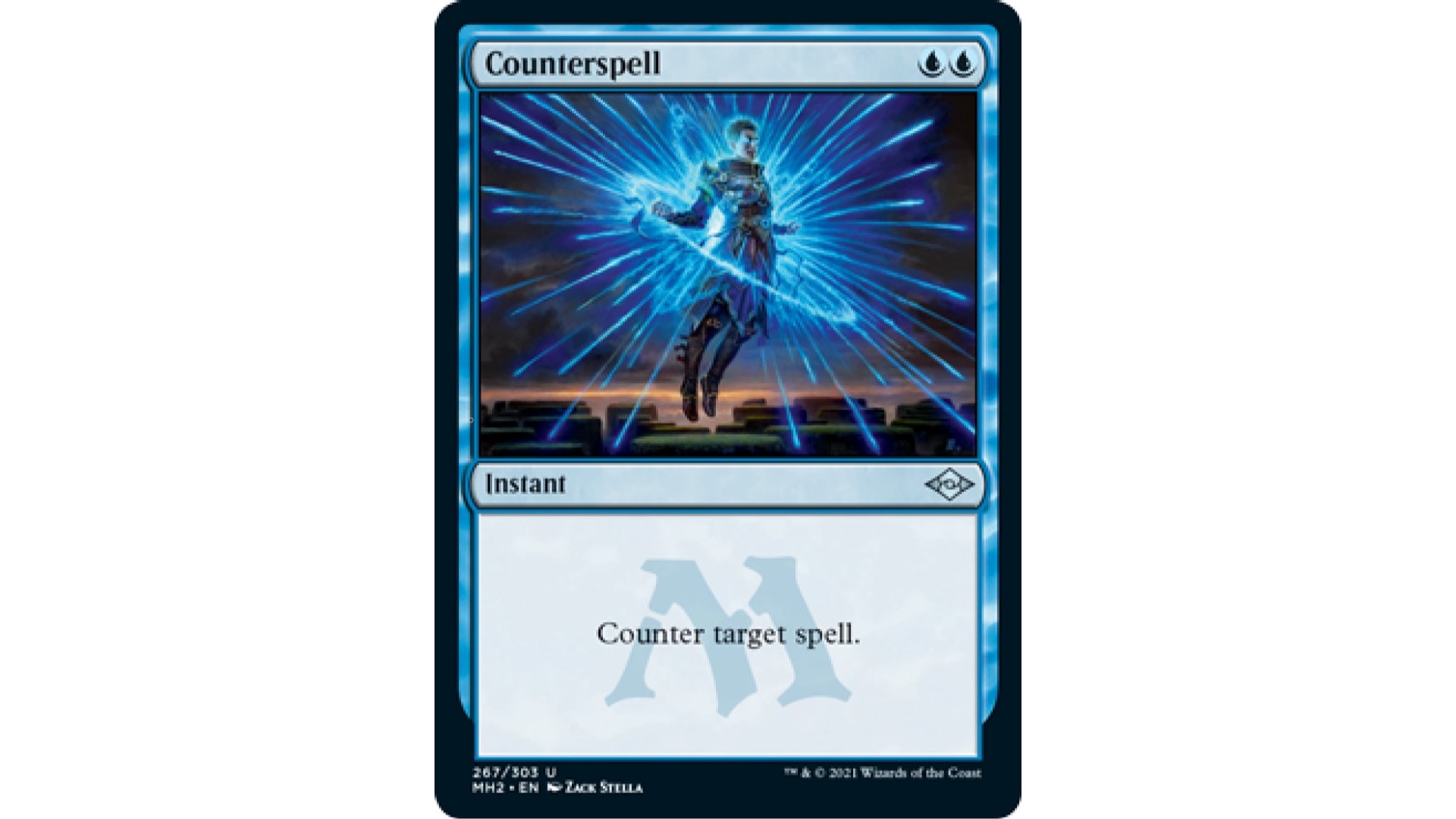 It’s long been wondered if Counterspell, one of the most iconic blue cards ever printed, would be too powerful for Modern. We’ll now have the opportunity to find out, as this long-clamoured-for card – the original, eponymous counterspell – is being injected into the format. It should be a much-needed shot in the arm for blue-based control decks.

On that power question, my money is on ‘no’, incidentally – but the card is sure to see a lot of play nonetheless. There are currently many flavours of counterspell in Modern, but all of the two-mana variants have some pretty sizeable drawbacks. This will immediately supplant them in any deck that can rub two blue mana together. 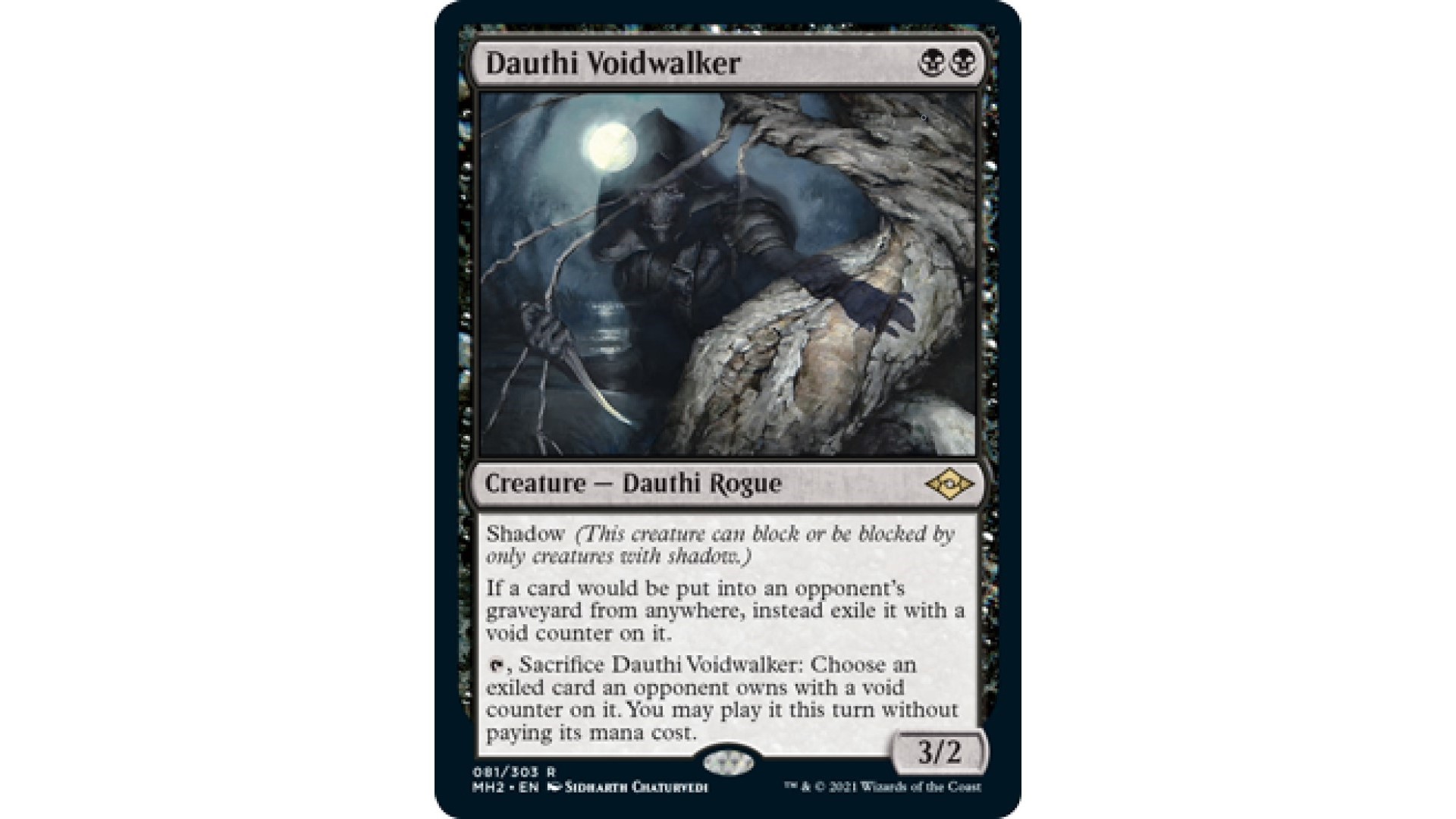 An unblockable creature with three power for two mana is already pretty exciting for aggressive decks, as it’ll come down early and do decent damage before it gets answered.

Dauthi Voidwalker has far more up its sinister sleeve than this, however. It also nullifies your opponent’s graveyard – pretty backbreaking for strategies like ‘Dredge’ that rely on the ‘yard – and allows you to grab your opponent’s best threat from the void and play it free of charge (Okay, at the cost of its own life, but it’s a lowly two-drop, so who cares?)

Paired with targeted discard cards like the popular Thoughtseize, Dauthi Voidwalker has the potential to be super scary. Which is fair enough, as that’s pretty much the Dauthi’s whole schtick. 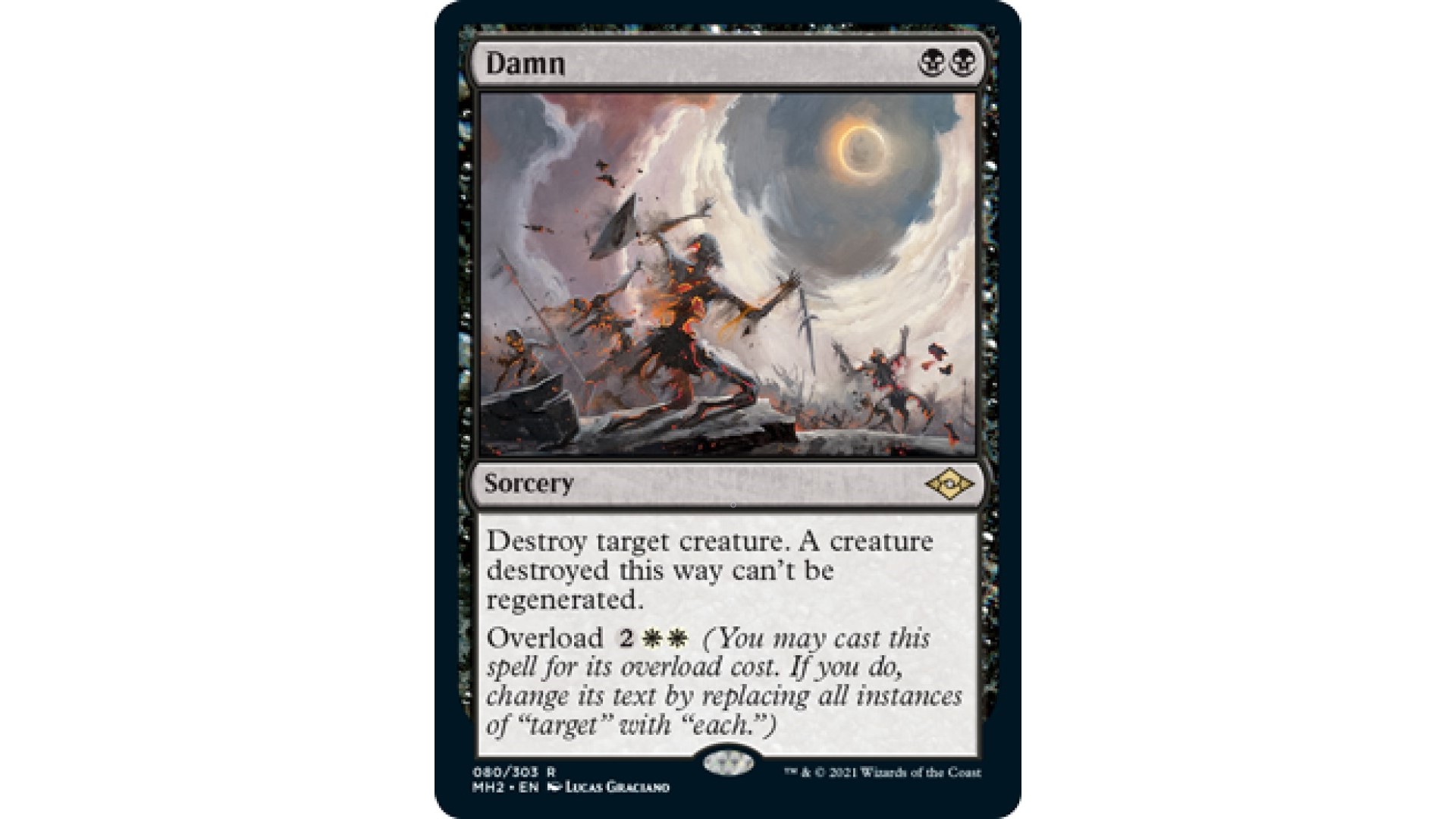 Damn! Now this is something special: a solid removal spell that doubles as an affordable board wipe. This card is ideal for control players, who want to play a defensive game, shutting down their opponent’s threats as they play them.

Follow the leader: How to build MTG Commander decks

Flexibility is an oft-underrated attribute in Magic. A card like this is excellent, because it’ll help you to win in multiple different situations. An expensive board wipe is overkill if you just have one creature to deal with, and a single target kill spell is pointless if you’re being harried by lots of little creatures. Damn is both, which makes it far better than the sum of its parts. 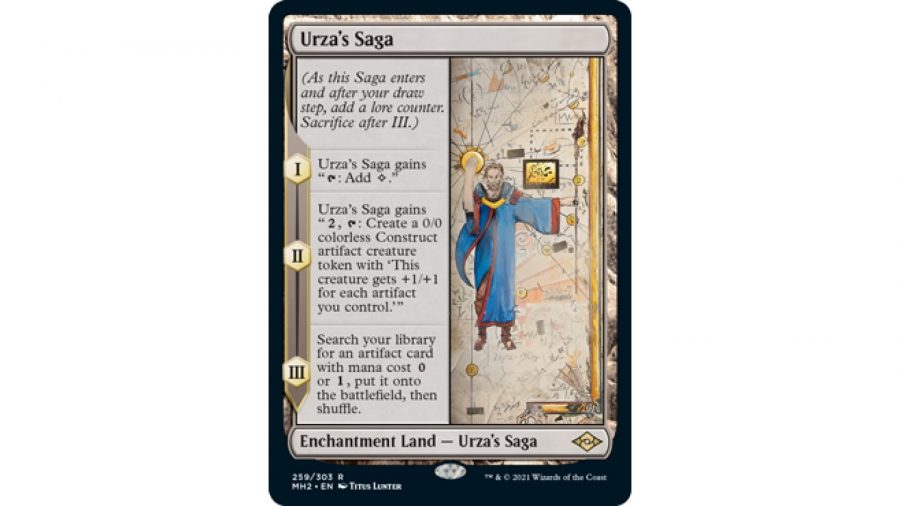 A Saga-Land? What will they think of next? Urza’s Saga is a complicated beast. It effectively works like a temporary land that upgrades, and then sacrifices itself.

If there’s one card in Modern Horizons 2 that could get banned, it’s this

On turn one, it’s a regular old colourless land that you can play for free, but on turn two it can create a Construct that gets stronger for every artifact you own. The real humdinger is on turn three, though, when it leaves the field, but not before fetching up a cheap artifact you can instantly put into play. This card might seem innocuous, but trust me: beneath that unassuming exterior it’s got fangs. There are a multitude of different artifact decks that can make excellent use of its abilities, particularly that third one, and it may well allow for some truly nauseating combos. If there’s one card in Modern Horizons 2 that could attract a banning, this is it. 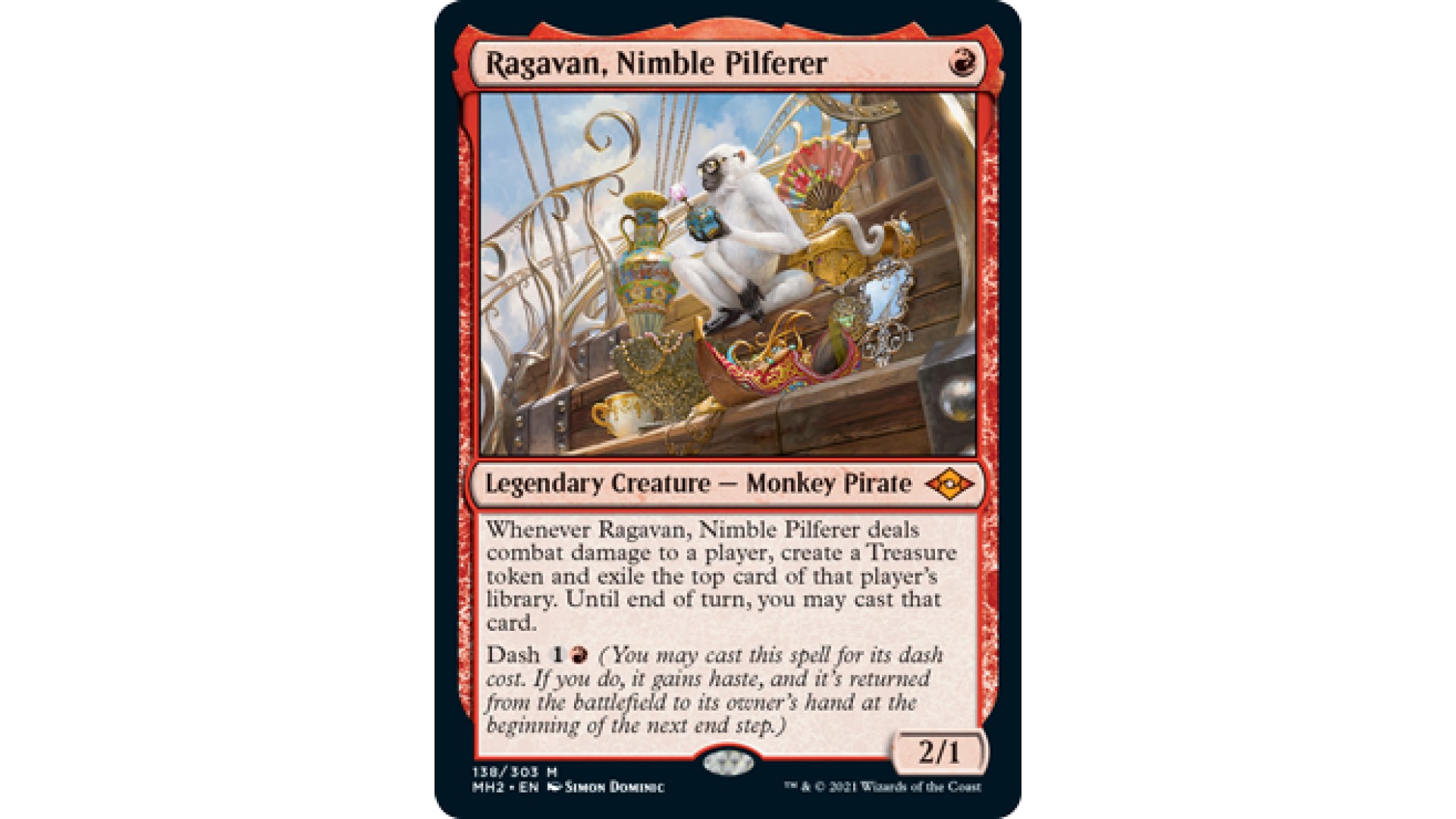