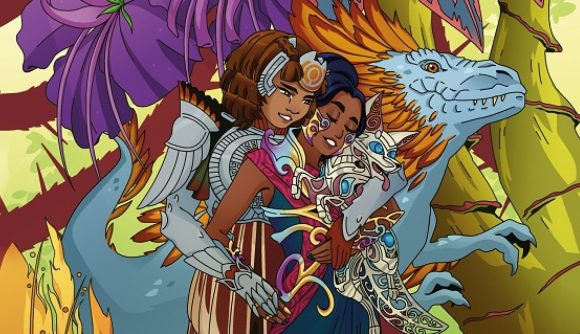 On Monday, Wizards of the Coast announced a new Secret Lair drop for Magic: The Gathering, featuring work by diverse artists. It described the drop, titled ‘Pride Across the Multiverse’, as “a celebration of the LGBTQIA2+ community’s relentless creativity”. However, on social media, fans have been quick to point out that both the announcement and an accompanying story article in which two female planeswalkers share a kiss, are inaccessible in numerous countries across Latin America and Southeast Asia.

Responding to a comment by Twitter user @kozistranslator, who asked why they could not access the content in Brazil, the official Secret Lair Twitter account responded with a link to an article posted to the Magic website in 2020: ‘On Magic Story and Regionally Blocked Stories’. This article explains that “some regions prohibit subject matter we think is valuable to our storytelling. Unfortunately, this means that some of our content will not be available in those markets. While we do not agree with these laws, we are required to follow them.”

Notably, while some countries in South America have discriminatory anti-LGBT+ laws, Brazil is not one of them. Brazil legalized same-sex marriage nationwide in 2013 – two years before the US did – and in 2006, the country’s São Paolo Pride parade was credited by Guinness World Records as the largest in the world.

Along with Brazil, the two articles cannot be accessed in much of Latin America, including Mexico, Colombia, Peru, and Argentina. They also appear to be blocked across Southeast Asia, in countries such as Indonesia and Singapore.

Not all of our content is available in all regions. https://t.co/VZiIQpHiJ7

The story article, Note for a Stranger, by Wizards of the Coast worldbuilding creative lead Alison Lührs, describes a flirtatious encounter between planeswalkers Saheeli and Huatli. The ‘Pride Across the Multiverse’ Secret Lair goes up for preorder on May 4, and features eight cards with unique artwork, all by LGBTQIA2+ artists.

Wizards says 50% of proceeds from the Secret Lair will be donated to The Trevor Project, a suicide prevention hotline for young LGBTQ people.

If you need an explainer on all things Secret Lair, here’s our Secret Lairs guide. And if you want to find out more about controversial and expensive parts of Magic: The Gathering, here’s our guide to the Reserved List.