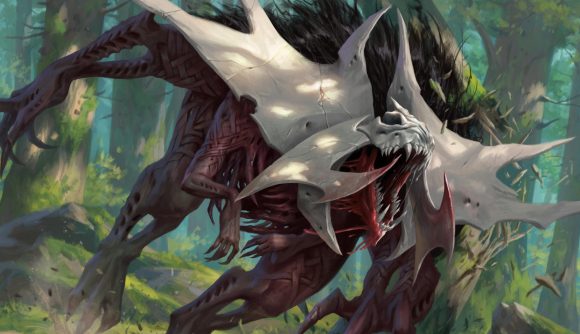 Magic: The Gathering appears to have introduced a new type of collectable card into its Secret Lair line of premium boxed sets. Representing two firsts for the trading card game, the new cards are not only numbered from one to 100, but also printed in reverse, with horizontally mirrored text and artwork.

Ben Bleiweiss, general manager of MTG retail store Star City Games, shared an image of one of the cards on Twitter yesterday, showing a foil copy of Viscera Seer with its text and artwork printed entirely backwards, and a gold “#77 of 100” watermark printed on its front. Bleiweiss says he found the individually-packaged card in a foil Phyrexian Praetors Secret Lair box, the latest line of Secret Lair products to begin shipping.

It’s currently unclear whether the mirrored card is a misprint or has been intentionally reversed. Wizards of the Coast hasn’t announced a new line of bonus cards, although the numbered watermark might suggest Bleiwess’s card is a deliberate printing, rather than a mistake that’s occurred during production.

It’s also unclear what, exactly, the numbered stamp is intended to mark. Some fans have suggested that Bleiwess’s card is the 77th reversed Viscera Seer to be produced out of 100 copies. Others have speculated that the 100 mirrored cards will each be distinct, and the Viscera Seer is only one among 99 others.

Although MTG cards have never been numbered before (besides the ‘collector number’ information panel at the bottom of each card that shows its place within its sets), it’s a system that’s common to many other collectible card games, and especially prevalent to collectible sports cards. Often, cards with specific numbers will be highly prized, such as those that have special relevance to a character or the game at large, or those with low numbers, showing their early printing.

Just opened what appears to be an AMAZINGLY RARE card out of the most recent #SecretLair drop. Viscera Seer, but with all of the text printed backwards! @MTGSecretLair Any comments? #MTG @StarCityGames #77/100 pic.twitter.com/7XTCjBVOqg

For those wanting to nab the mirrored card, Bleiweiss is auctioning it in the MTG Rarities Facebook group. The highest bid has now reached over $1,500 / £1,120.

While we wait for Wizards to confirm when and where these new collectible cards might appear, check out the rarest Magic: The Gathering cards that have ever been sold. Or, take a peek at the most expensive Pokémon cards, if you’re a collector of all stripes.