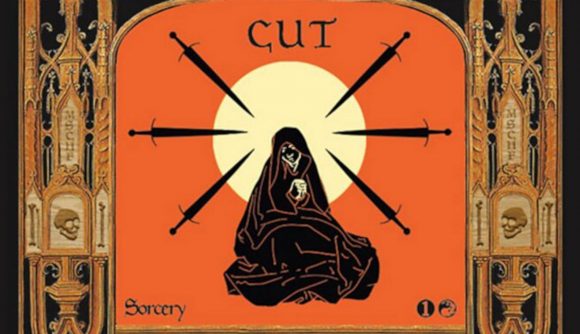 Magic: The Gathering’s Secret Lair premium boxed sets are known for being a little zany. Their limited-release cards often feature strange visual quirks alongside exclusive artwork, such as the mirrored cards that popped up in Phyrexian Praetors just last week. Things have been taken a little further will the latest drop, however, with a bonus card that doubles as a peelable sticker.

Shared on Reddit yesterday, the upcoming and unannounced Secret Lair MSCHF drop will include a unique Plains card as an extra bonus, illustrated with a picture of an empty golf course. Except, it’s not just a Plains card. Its front is actually a metallic sticker that can be peeled back to reveal a copy of Battlefield Forge underneath, complete with a drawing of a burning golf course and the accompanying caption: “Golf sucks now and has always sucked”. The idea, presumably, is that the artist does not, in fact, like golf.

This is the first time a card of this kind has appeared in MTG, although it’s a little unclear what, exactly, Wizards expects players to do with it. You’ll have the choice to keep the card as a Plains, or peel off its front sticker to transform. It looks to be a one-time option, however, as the chances of reapplying the sticker in perfect alignment are pretty slim.

Secret Lair drops are intended more as limited-printing collectible boxed sets than useful releases with which to build a deck. Check out a video of card peeling below.

The card’s bizarreness is someway explained by its creators. This Secret Lair drop was produced by Wizards in collaboration with MSCHF (pronounced ‘mischief’), a New York-based art collective that has a penchant for outlandish pieces. In the past, they’ve loaded a laptop with malware, turned a rubber chicken toy into a bong, and sold paintings of their medical bills to pay for those medical bills.

Although Secret Liar MSCHF hasn’t been officially announced by Wizards yet, teaser copies of the set have been distributed to content creators online. After sharing their copies on social media, we’ve seen that the drop will include alternate-art variants of Swords to Ploughshares, Grim Tutor, Teferi’s Puzzlebox, Blood Moon, and the Cut-Ribbons split card. Its pre-order date is yet to be announced.

For more Magic, check out our pick of the best MTG deck builders to help you assemble a stock of cards. Or, read our guide on how to build a Magic: The Gathering deck for some pointers.