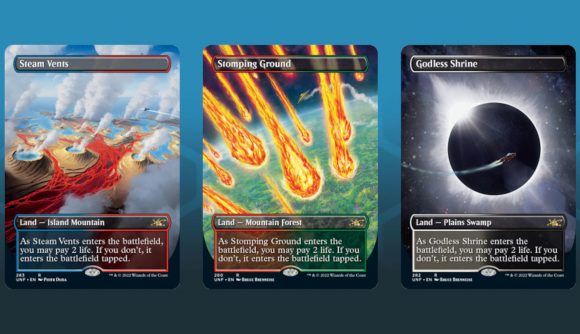 Unfinity, the upcoming Magic: The Gathering un-set planned for release in April next year, will return fan-favourite Shock Lands to the trading card game. The unsanctioned set will include the ten dual-Land cards originally introduced in 2005’s Ravnica: City of Guilds expansion, reprinting them in a space-themed art treatment to suit the set’s sci-fi carnival setting.

The new prints of the Shock Lands were revealed in a MTG blog post yesterday. All borderless, the cards feature spaceships, meteors, alien flora, and other sci-fi imagery rarely seen in usual Magic sets. All ten of the cards will be returning, including Stomping Ground, Temple Garden, Hallowed Fountain, Watery Grave, Blood Crypt, Godless Shrine, Steam Vents, Overgrown Tomb, Sacred Foundry, and Breeding Pool. Check out the artworks below.

Although coveted by many MTG players, these Shock Lands won’t be appearing regularly. They’ll show up in one out of every 24 draft booster packs, and have a one in 24 chance of appearing in the foil and galaxy foil slots of Unfinity’s collector boosters. The Lands will be released as foil box toppers in draft and collector booster boxes, too.

Although Shock Lands haven’t been printed since 2018’s Guilds of Ravnica block, the MTG community’s fondness for them hasn’t gone away. Generally seen to be incredibly useful for their two basic land types, it’s their replacement ability that’s garnered them such popularity. Shock Lands enter the battlefield tapped, but can be untapped if their controller pays two life, providing a reliable mana engine from the start of the game at little cost.

Their name is a reference to MTG’s Shock ability, which simply deals two damage to a player’s life. 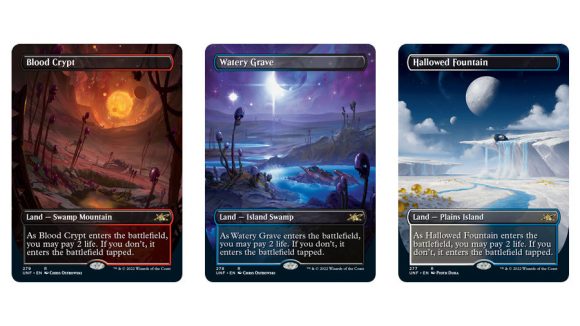 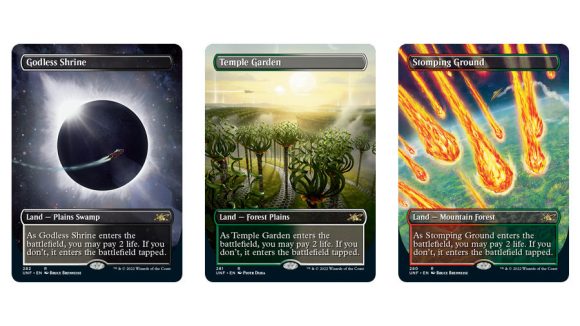 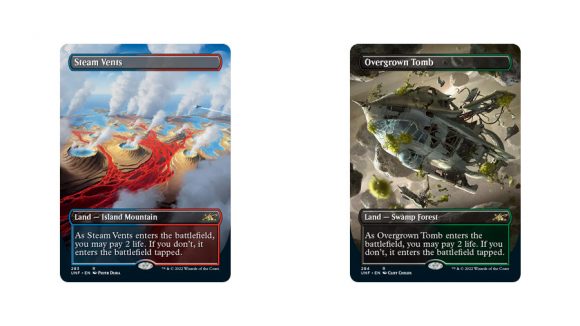 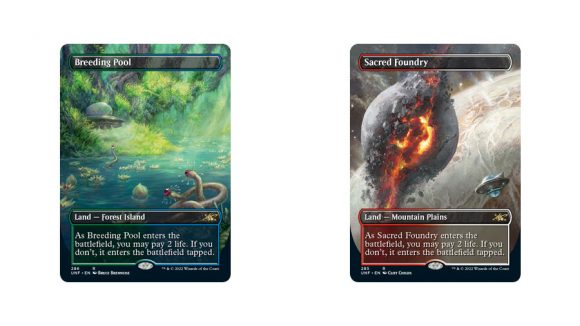 The cards have been reprinted several times since their original release in 2005, appearing in every Ravnica expansion set despite their Multiverse-agnostic names. Earlier in 2021, they were reprinted as part of Dr Lair’s Secretorium Superdrop – a collection of Secret Lair premium boxed sets – that restyled the cards as ‘Culture Shocks’, and included artwork of Planes across the Magic Multiverse.

Unfinity is scheduled to release on April 1 2022. Until then, check out the best MTG deck builders you should be using, or have a peek at all the MTG Arena codes you can use to bag some freebies.