Mythic Games has revealed the first gameplay details of its upcoming miniatures skirmisher 6: Siege – The Board Game, a tabletop adaptation of competitive first-person shooter Rainbow Six Siege. A blog post uploaded to the publisher’s website yesterday reveals some of the game’s fundamental features, and how it will ape its videogame namesake. The game is playable with two to four players, and will go live on Kickstarter this summer.

As in its source material, 6: Siege splits players into teams of defenders and attackers, who control groups of five ‘operators’ to complete objectives and defeat opposing units within close-quarters tactical assaults. The board game has been designed to simulate much of the videogame’s features, including its dynamic maps, customisable teams of operators, and objective modes.

The core box will include 20 operators (ten defenders, and ten attackers), each based on a character from the videogame. Among them are Sledge, Ash, IQ, Mute, and Tachanka, which have reportedly been designed to “translate the eccentricities (at least in spirit) of each of the original game’s operators” to the tabletop. Each is outfitted with different equipment, influencing their mobility, accuracy, and dice rolls in-game, and carries some gadget or weapon that grants them a special ability.

As for Siege’s dynamic maps, Mythic says the board game will replicate this during its initial set-up. Matches start with several doors and windows barricaded, mines and barbed wire placed down, and cameras positioned. Before the action kicks off, defenders can choose to modify these fortifications, and attackers alter their position around the building’s perimeter; recreating the pre-match set-up of the videogame.

Some operators grant additional set-up perks or environmental changes, and walls, windows, and other access points can be destroyed mid-match. Defenders will remain concealed on the map until detected by the attacking force, as if hidden in the fog of war.

The core box also contains two game boards, each based on a map from the videogame: Abidjan Consulate and Clubhouse. Only one floor of each has been replicated in the board game, although verticality will reportedly be simulated through the presence of multiple access points around the maps’ buildings. 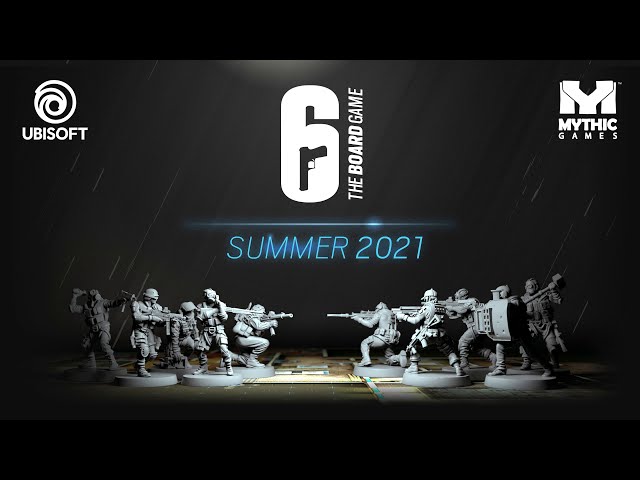 6: Siege will also replicate the videogame’s three objective modes. Control is the introductory mission type, and challenges you to captures specific objective points; in Bomb, attackers must defuse one of two bombs dotted around the map; while in Hostage, the attackers need to rescue and extract a hostage before time runs out.

The board game adaptation of Rainbow Six Siege was announced back in February this year through a, super concise, teaser trailer. Since then, we haven’t seen much at all of the game, until now.

Publisher Mythic Games is best known for successfully kickstarting a board game adaptation of indie dungeon-crawler Darkest Dungeon earlier in January this year.  That Kickstarter campaign received over $5,500,000 / £4,745,869 in funding, and we called it one of our most anticipated upcoming board game Kickstarters.

We’ll keep you updated with any more gameplay reveals of 6: Siege as we get them. But in the meantime, read our guide to the best board games if you fancy some more cardboard action, or peruse our list of the best tactical shooters for some gunplay.