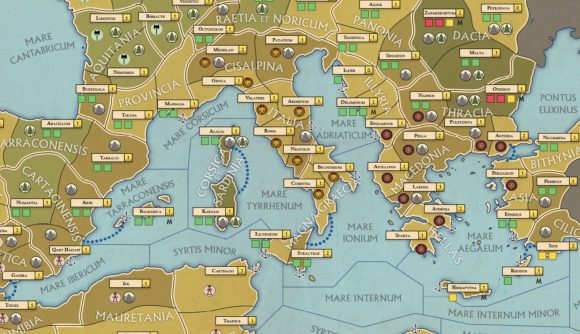 Total War: ROME: The Board Game is fast approaching. In the run-up to its crowdfunding launch later this month, publisher PSC games is releasing a slate of dev diaries revealing more details about the game. Last week, we got a glimpse of its combat system, while this week’s diary gives us our first look at the game’s map – borders, provinces, and more.

The base game’s board (check it out below) will closely resemble that of the original videogame, covering Western Europe, territories of the Levant, and areas in North Africa. The entire board is split into separate provinces that each carry a value in ‘millions of Denarii’ (showing the income gained from holding that region) and a defensive strength (showing the force you’ll be up against when you try to invade).

The map also looks to show the starting regions of the game’s main four factions: Carthage across North Africa and southern Spain, Rome in Italy, the Barbarian Tribes in modern-day France and Germany, and the Greeks in, well, Greece. None of the factions are too distant from one another, which checks out with designer Simon Hall’s previous comments that the game will let players collide in battle quickly.

There are also a few circular tree and mountain symbols scattered about. These represent the difficult terrain that will either hinder the combat effectiveness of your troops (such as cavalry fighting in mountains) or bolster it (in the case of the Rhomphaia units).

In the game’s StratPlay mode, discussed in last week’s dev diary, terrain influences the dice you’ll be rolling, while the larger BattlePlay system integrates terrain into the makeup of the ‘battle board’ on which you deploy your army to fight. 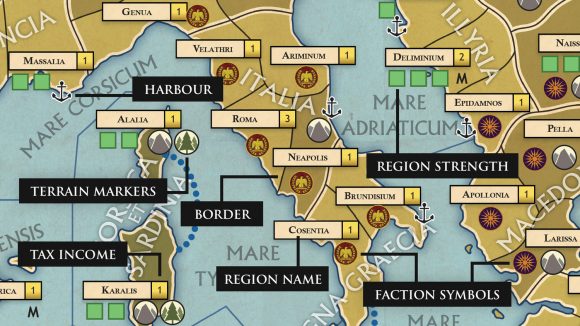 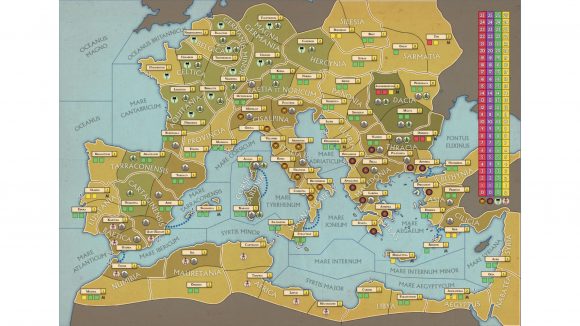 Port symbols designate the locations you’ll be able to set sail from as you move your troops between provinces, and the dev diary confirms that naval battles will also be included in the game. Each player will have separate miniatures representing their army, navy, and agents (such as assassins) to move across the map.

The dev diary points out that the map is still in development, and its art hasn’t been finalised. We can expect more peeks at the game in the run-up to its Gamefound crowdfunding launch on November 30.

In the meantime, check out our pick of the best board games to play in 2021, or the best strategy board games if you’re so inclined.