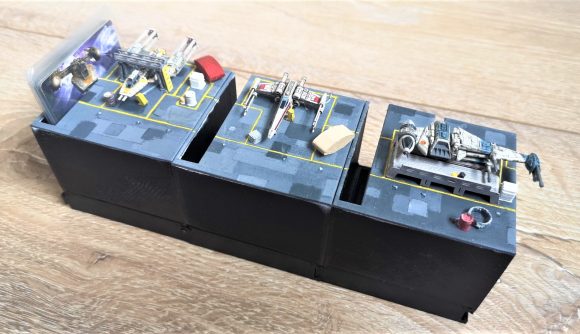 The Star Wars: X-Wing miniatures game is Wargamer’s absolute favourite gateway wargame, and sits comfortably at the platinum-level, VIP… ahem… top table of tabletop gaming. When it comes to storing your tiny starships, however – together with your squadron’s chosen loadout of upgrade cards, manoeuvre dials, and pilot tiles – things get a bit fiddly. You can seal them away in foam trays, but then you can’t admire their hulls at will. You can put them on display on their stands – but then, what to do with the gubbins that comes along with each ship? I tell you, it’s a conundrum.

Enter the creations of Reddit user – and pioneering X-wing 3D-printing engineer – CptAmmogeddon, posted on the site’s r/XWingTMG community yesterday. The good Captain has designed two ingenious sets of 3D-printable storage solutions for your X-Wing squadrons: an open-topped, board game-style dashboard, and the more alluring “hangar” add-on design, which fits over the top of the base unit, enclosing your cards and whatnot, and forms a spaceship-hangar-floor diorama setting for your ship.

CptAmmogeddon has now made the relevant 3D design files for the storage solution and hangar add-on available on printing site Thingiverse for free – so, if you’re lucky enough to have a working make-anything-you-like machine and some make-anything-you-like-coloured-string available, then you, too, can share in the Captain’s stupendous, squadron-storing inventions.

In their original reddit post, CptAmmogeddon said the intention had been to decrease the setup time needed for quick games at home with their partner, as they both consistently used the same loadout of ships and upgrades, to train their in-game strategy – making it preferable to keep their chosen ships, dials and cards together, instead of dismantling and reassembling the teams each time. 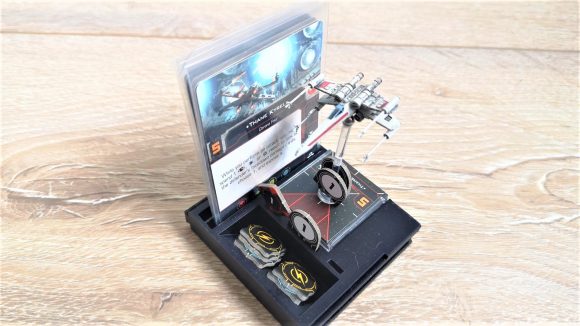 They explained the basic storage solution (with or without the hangar addon attached) can accommodate one small ship, including the base, one manoeuvre dial, several pilot and upgrade cards, two to three bombs or mines, one ID marker, two target lock tokens and “a few charges”.

The best bit: the whole construction (with or without hangar attachment) can interlock with another on either side – so you can chain them together to accommodate your whole squadron in a neat little row.

The X-Wing subreddit’s responses to CptAmmogeddon’s creations have been predictably excitable, with players and hobbyists rejoicing at the prospect of a storage solution that both keeps the bits together, and displays their beloved little spaceships.

Initially published by Fantasy Flight Games after its original release in 2012, X-Wing was then transferred to Atomic Mass Games (another Asmodee subsidiary) shortly after the transition into its Second Edition ruleset in 2018. 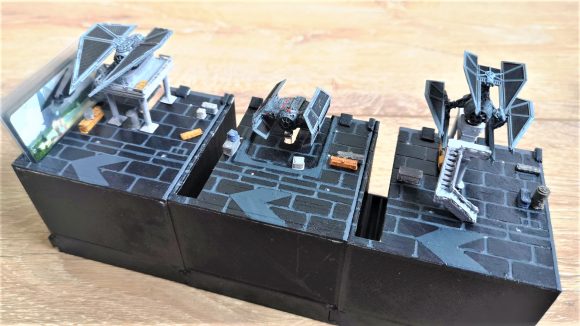 X-Wing has numerous new model expansions planned for 2021, the most recent of which were the Rebels’ Phoenix Cell Squadron Pack, Imperial Skystrike Academy Squadron Pack, and Fugitives and Collaborators Squadron Pack, all released on March 26.

Want to find out why Star Wars: X-Wing has such a prominent seat in Wargamer’s inner circle? Check out our column on the game’s extraordinary scope.