Warhammer 40k’s Ferrus Manus is known for being as hard and unyielding as the metal digits that give him his name. He’s renowned as a master strategist, and an incredible weaponsmith who was responsible for kitting out many of his Primarch brothers with some of their best toys.

While all the Primarchs were tough, few were as tough as Ferrus Manus, who grew up amidst earthquakes, volcanoes, and vicious beasts, and once went toe-to-toe with the Emperor in single combat. That hardness is reflected in his personality. Ferrus Manus was not an easy man to be pals with. His disdain for weakness and obsession with strength made him ruthless. In his prime, Manus was quite the unstoppable force (until he was, erm, stopped), thoroughly determined to strengthen the Imperium through any means necessary, and unquestioningly loyal to the Emperor.

Ferrus Manus is also stone cold dead, meeting an unfortunate end rather early on during the Horus Heresy, leaving his legion of (not very creatively named) Iron Hands much bereaved. That’s skipping ahead a little though. Before we get to his ultimate fate, let’s dive into the life of this iron-hard Primarch, and find out what makes him tick.

Here’s what to know about Ferrus Manus: 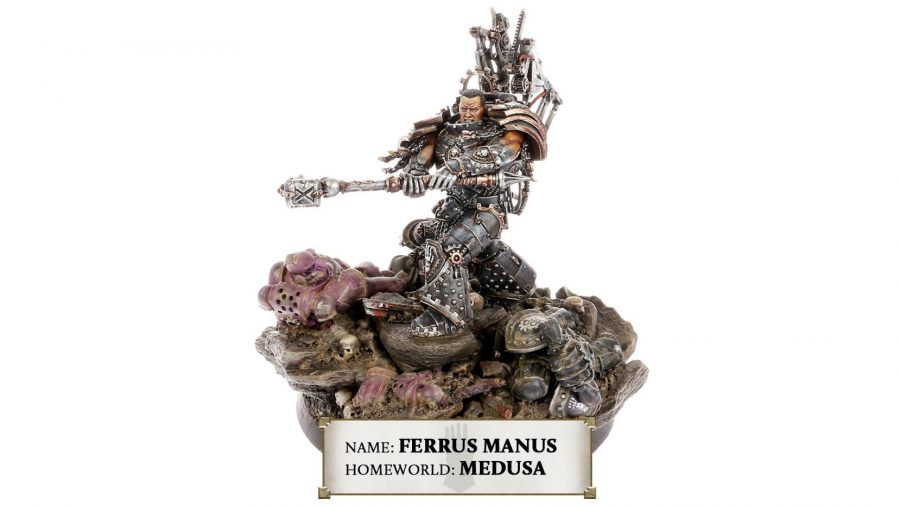 Who is Ferrus Manus?

Ferrus Manus’ story starts, much like the rest of the Primarchs, with him being stolen away from his Emperor dad as an infant. His pod crash landed on the harsh, tectonically unstable world of Medusa, toppling an enormous mountain called Karaashi, Ice Pinnacle (was it named after the sound it made when he hit it?) and setting off earthquakes all across the planet.

Manus then grew up alone in a cave, until, examining some mysterious runes in his chamber, he managed to unwittingly awaken and unleash upon the planet an enormous bio-mechanical monster. This was Asirnoth, a huge robotic wyrm (possibly of Necron origin), which Ferrus Manus swore to kill.

Ferrus Manus was single minded in this mission, refusing to join one of the warring nomadic tribes dotted around Medusa, and instead seeking out difficult physical feats to perform in an epic training montage that eventually led to a clash with the Silver Wyrm. These extreme deeds made him something of legend to the native tribes, who gave him nicknames like ‘The Cataclysm’, ‘The Hunter’ and ‘The Finality’.

After a gruelling fight, the Silver Wyrm Asirnoth was eventually killed by Ferrus Manus, in gruesome fashion. The young Primarch submerged the beast in a river of lava found in a hellscape called the Land of Shadows, plunging his hands into molten rock to ensure the beast melted for good. 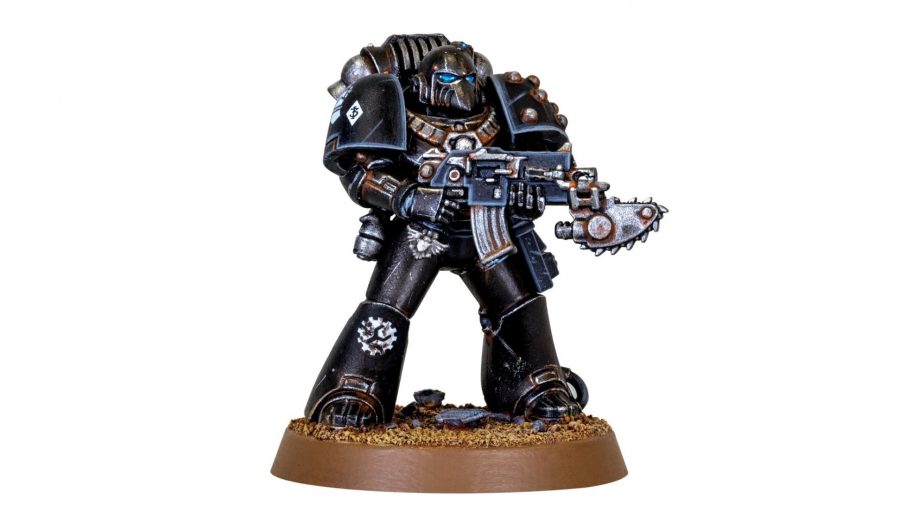 As you might expect, Ferrus’ hands were horribly burned in the process. As you might not expect, when he finally removed them, they were coated in the living metal of the creature, which had fused with Ferrus Manus, giving him ‘iron’ hands. (This high tech metal was certainly not iron, however. It was flexible, but as strong as the ceramite of space marine armour.) This strange fusing also granted Ferrus Manus an unnatural knowledge of technology, which he used to upgrade Medusa, and become the planet’s ruler.

Ferrus Manus was a pretty tough leader – you could say he ruled Medusa with an iron fist. He didn’t unite its clans but rather encouraged them to continue fighting, believing this would make the people stronger. He also never allowed conditions of the planet to be improved, fearing that this would lead to weakness. Bit of a dick move there, Manus, not gonna lie.

Not all of the Primarchs greeted the Emperor with open arms when he finally came to reclaim them, but only Ferrus Manus had the stomach to take him on. Ferrus Manus saw the Emperor as a worthy opponent, and the two superbeings had a Dragon Ball Z showdown, which almost blew up half the planet again. On Medusa, you can pretty much set off an earthquake by sneezing. When he eventually had to concede, Ferrus Manus pledged his undying allegiance to his da.

Fighting for the Imperium, Ferrus Manus controlled his gene-progeny, a legion of Space Marines who took the name Iron Hands. They were thoroughly devoted to their Primarch and took his questionable outlook on life to the nth degree. So obsessed were they with avoiding weakness that they began to see the human body (even super-jacked space marine bods) as frail and fallible, and began augmenting themselves with mechanical parts – particularly metal hands.

Ferrus Manus himself was pretty unhappy with this state of affairs, and said that he would stop the practice (and remove his own augmentations) when the war was over. Unfortunately, he wouldn’t make it that far… 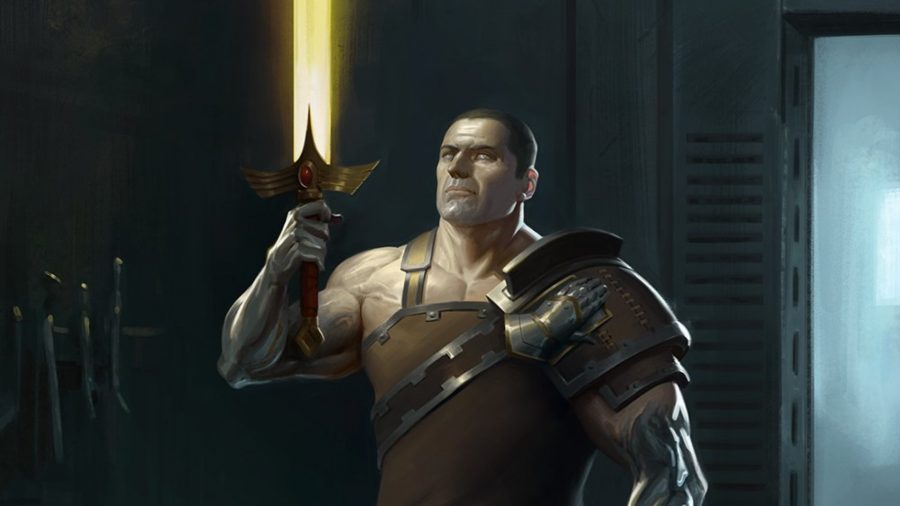 Where is Ferrus Manus in Warhammer 40k?

The grim, single minded Ferrus Manus struck up an unlikely friendship with the showy, vain Fulgrim, Primarch of the Emperor’s Children. It was Fulgrim who gave him the nickname ‘The Gorgon’ after the Terran myth of the ugly creature that could turn men to stone (though the name of his homeworld must surely have been a factor).

The two were very different, but it seems where they were similar was their massive egos. Their friendship came out of a weapon forging competition where each attempted to prove themselves the best artisan. Manus forged the burning sword Fireblade and Fulgrim made the Forgebreaker thunder hammer – ultimately each one was so impressed with the other’s creation that they declared the other the victor, and the pair traded tools. Very cute.

Unfortunately, like most stories in Warhammer 40k, this one does not have a happy ending. During the Horus Heresy, Fulgrim fell to chaos and tried to convert Ferrus, who instantly attacked him, enraged at his weakness. But each held back from killing his former friend – Ferrus snapped Fulgrim’s sword, who retaliated by KOing him and nicking his hammer. 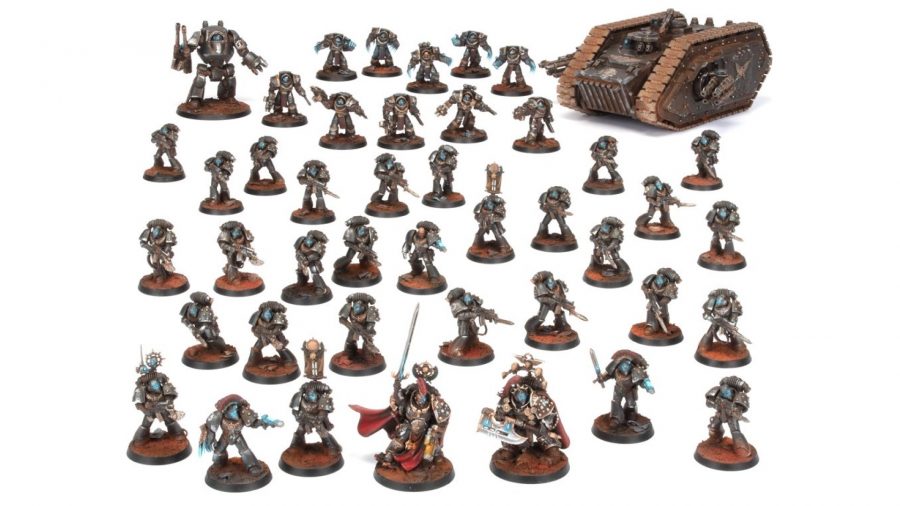 The two met in battle again during the infamous Dropsite Massacre of Isstvan 5, where loyal forces of the Imperium were betrayed by secret heretical legions. Amidst this terrible fight, the Iron Hands fought a desperate struggle against the Emperor’s Children. The two Primarchs clashed too, and Ferrus Manus met his end at the hands of his old bestie, who was powered up by a new demonic blade.

Where to begin: A reading guide for The Horus Heresy

The loss of Ferrus Manus was an enormous blow to the loyalist forces during the Horus Heresy. Horus seemed to be pretty cut up about it too. He took his skull, stuck it on his throne and – bit creepy – started talking to it, lamenting the fact that Ferrus Manus wouldn’t join him and he was stuck with a bunch of losers as generals instead. Ultimately the grisly artifact found its way back to the Iron Hands, and the skull now appears on an altar on Medusa.

Rather tragically, the Iron Hands’ obsession with the weakness of the flesh – the thing Ferrus Manus liked least about them – only got worse after their Primarch was martyred. They blamed emotion for the betrayal on Isstvan and cut themselves off from all feeling, becoming cold and inhuman. They eventually worked through their issues, but that’s a story for another time.