Arise ye Tarnished, for Elden Ring is now here, and, well, everyone’s talking about it, aren’t they? It’s an astounding RPG videogame that takes the FromSoftware formula many know and love, then puts it in an open world filled with strange lore, stranger characters, and more customisation options than you can shake a large, customisable stick at. If that description reminds you of a good DnD campaign, then you’re right on our wavelength – because we’ve carefully tested out how to play your DnD character in Elden Ring.

Like granddaddy DnD and similar tabletop RPGs, Elden Ring’s deep well of customisation options makes it an incredibly entertaining game to roleplay within, building out your character’s story and motivations alongside the game’s narrative itself. There are plenty of choices to make, and you can tackle a lot of the bosses in an order that you see fit, but you can also build out character classes in a way that makes other FromSoft games feel limited and ‘videogamey’ by comparison.

So, in the spirit of absolute fantastical freedom, we’ve taken a deep breath and dived back into the Lands Between to work up this guide on how to play your Dungeons and Dragons character in Elden Ring.

Gameplay-wise, this works best by focusing first on recreating your DnD character class. After all, with so many options available to you, why wouldn’t you want to embody your TTRPG class digitally? Hit the link for your class below and follow our foolproof Elden Ring primer – or hop straight back to our main guide to the DnD classes for the basics. 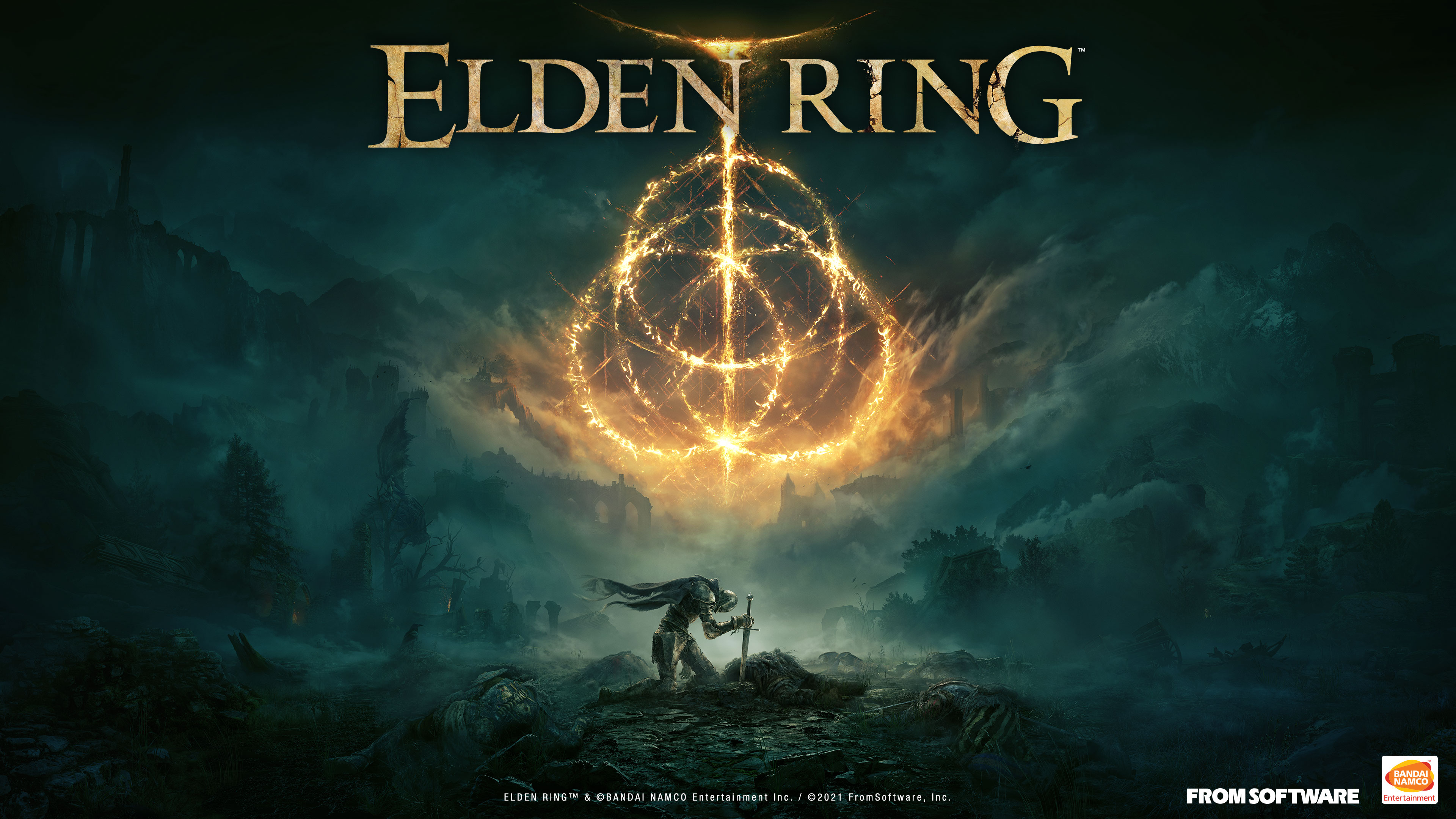 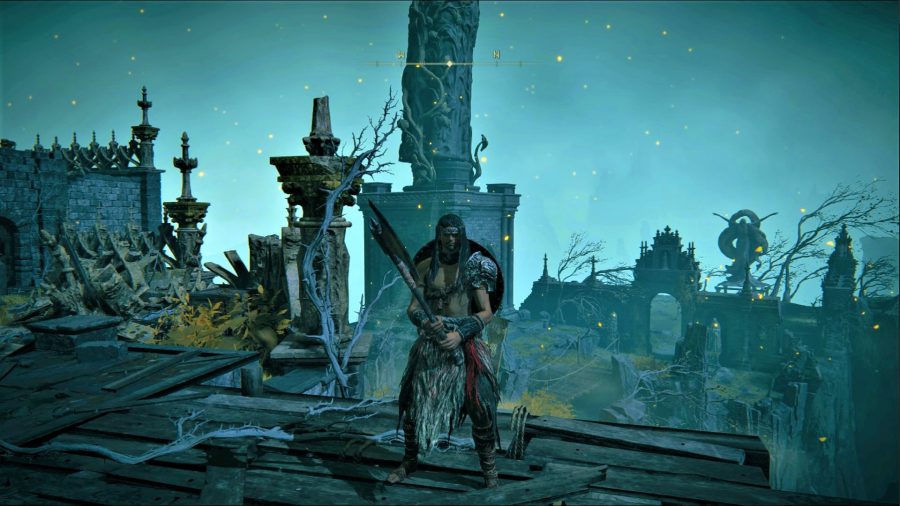 Barbarians are all about hitting things really, really hard. Thankfully, there’s a starting class in Elden Ring that is also about that, and even comes complete with armour that looks about right, and an axe too.

Simply choose the Hero class to begin with, and then focus mostly on strength above all else to ensure you can live out your barbarian dreams in Elden Ring.

The weapon you choose is up to you, but the clubs and axes of the game often have special skills that temporarily buff you in exchange for shouting really loud, and we think that’s ideal. 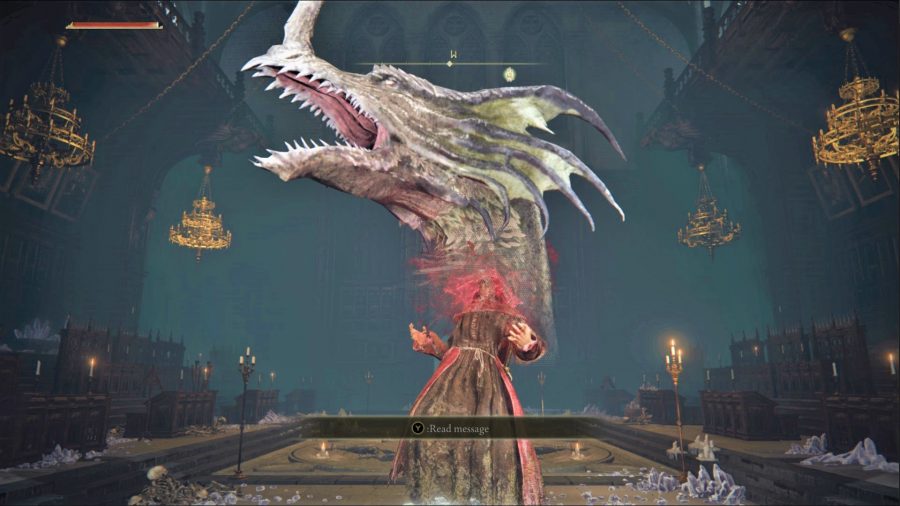 Bards don’t have a natural Elden Ring version, but we think we’ve got a good idea for them. You’ll want to start as the Prophet Elden Ring class, which isn’t very bard-y at all, but stick with us, because they have good starting Faith and Arcane stats, which is what you’re going to want. From there, once you’ve taken out the Dragon, you can go and get the first spell you’ll be using, which is Dragonfire.

From here, you’ll want to hunt weapons that have you a-hollering, and eventually grab the Greyroll’s Roar, which is literally a spell that summons a dragon above you to shout really loudly.

For all the details on playing a music maker in Dungeons and Dragons, check out our full DnD Bard 5E class guide. 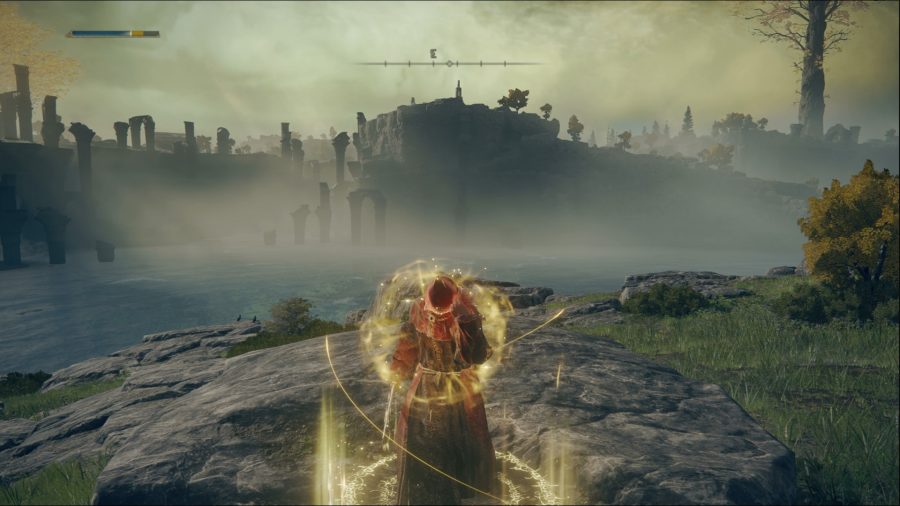 For a Cleric, you want to start off as the Confessor Elden Ring class. They start with a lovely broadsword, a healing spell, and one that makes them quieter. The healing is relevant, and we like the sword here too.

You’ll then want to double down on Faith mostly, because that’ll grant you access to an array of holy spells, along with plenty of support incantations that’ll heal status effects, or even grant buffs to your summons too. Which DnD god you worship probably has to be a little more headcanon-based, though.

To continue your Cleric training back in DnD, check out our extensive Cleric 5E class guide. 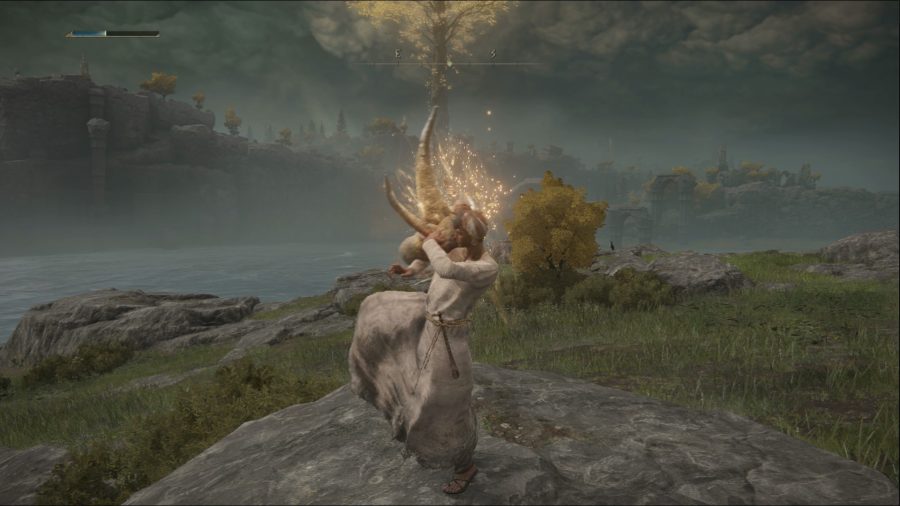 You can’t change shapes like a DnD Druid in Elden Ring. Sorry. Now, we could lean into the dragon spells for a Druid, because a lot of them have you summoning a dragon body part to attack with, but we actually prefer leaning into the beast incantations instead.

You can start as either the Confessor or Prophet Elden Ring classes, but we’re going to lean into faith a bit here, too. Once you’ve found your first Deathroot, you’ll be able to trade it for a beastly spell. Just keep hunting for Deathroot and you’ll keep getting new beast spells.

You can also transform a little using Dragon Cult spells, which you get by defeating tough Crucible Knights. Weapon wise, avoiding metal weapons feels important, so stick to clubs where possible for that authentic Shillelagh feel. 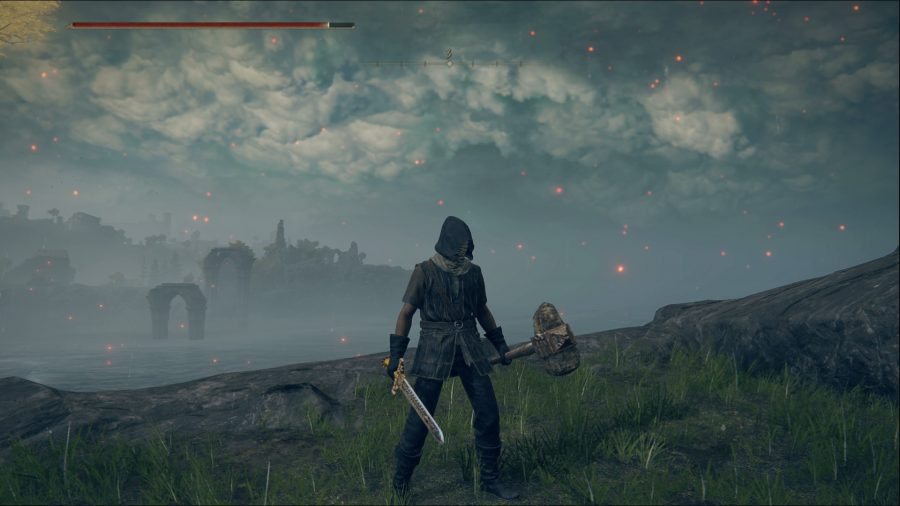 A Fighter should be well-versed in handling many weapons, and able to hit harder and faster than most anyone else in a scrap. As such, you’ll want to start off as the Warrior Elden Ring class. This class starts the game off with two scimitars, which scale with both strength and dexterity, and having them both equipped at the same time allows for some incredibly cool combos.

You’ll want to just keep pouring points into both dexterity and strength, but putting some extra points in endurance will allow you to hold more weapons, so do that too. 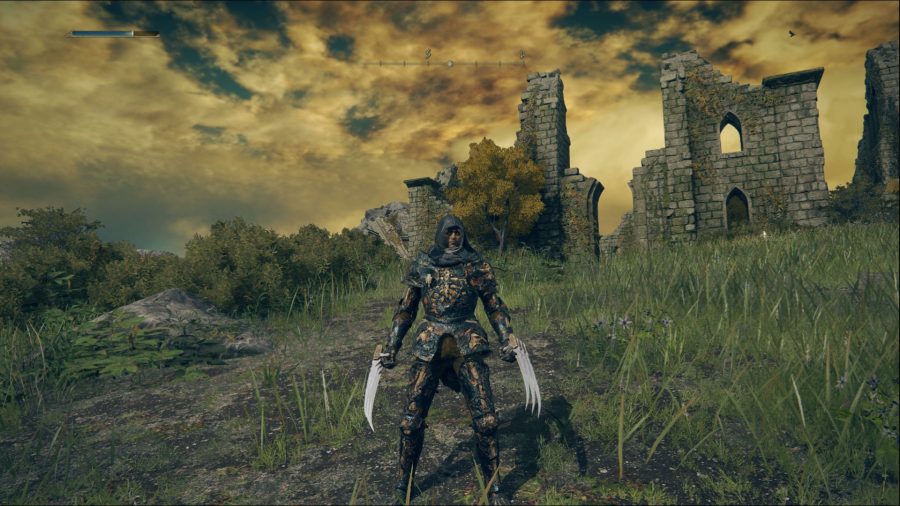 For a Monk, you should start off as the Vagabond Elden Ring class. The starting gear isn’t really on point, but the stats are great.

You’re going to want to seek out fist weapons like caestuses and the claws, and then you can simply punch your way through everything with a mix of strength and dexterity. Alongside that, we recommend putting extra points in vigour too, to allow you to take extra hits even if you’re keeping your armour light.

To explore full enlightenment with your Monk character, it’s best to read through our full DnD Monk 5E class guide. 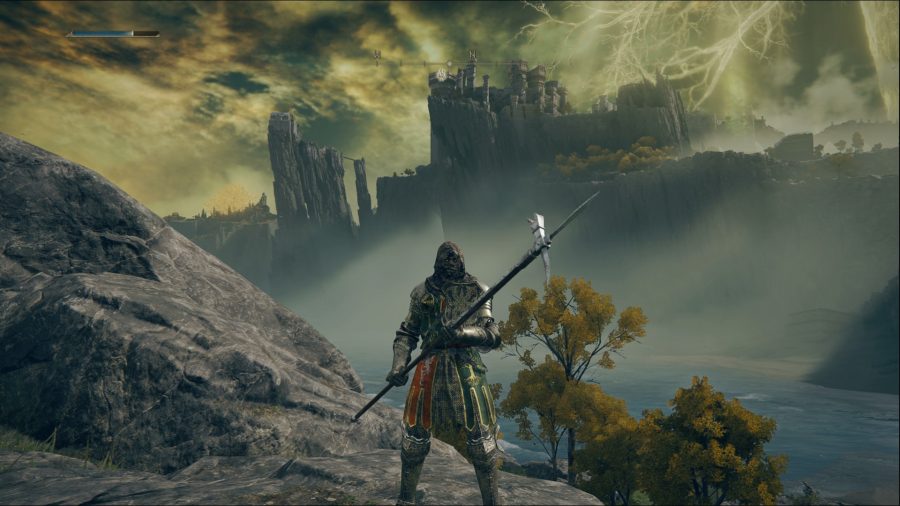 Paladins should start off as the Confessor Elden Ring class. This’ll net you a decent weapon and a healing spell to start with. You should then focus on upping your endurance, faith, and strength.

This will all allow you to make the most of your healing and support spells, but will also allow you to equip heavier armour, a great shield, and whatever oversized weapon you decide fits you best.

Keep your oaths and blades sharp for the tabletop with our full DnD Paladin 5E class guide. 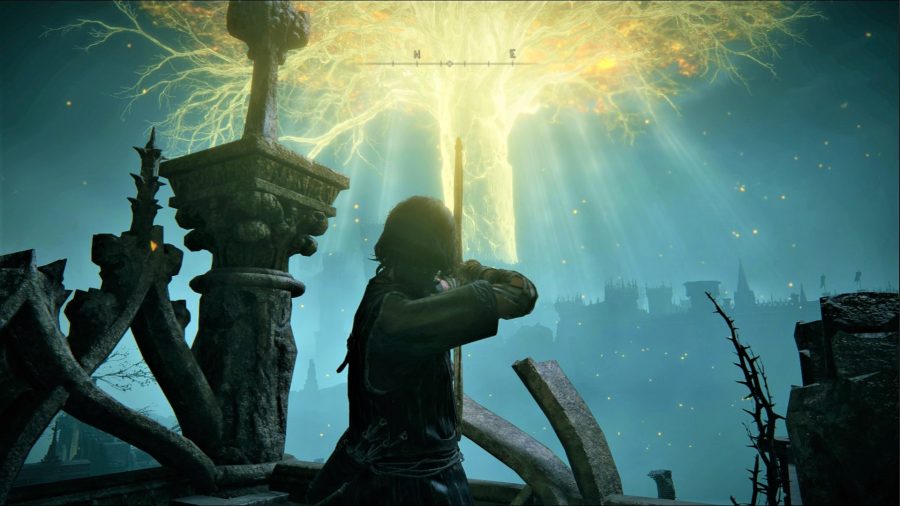 A good Ranger needs a good bow. Because your aim should be distance, we really like the Samurai Elden Ring class here, as they kick things off with a longbow.

You’ll then want to put your points into dexterity mainly, with a lot of endurance too to allow you to fire off arrows as often as possible. Along with finding a good skill for the bow you’re using, it’s worth keeping in mind that you’ll need to do a bit more farming for materials to keep your arrow stocks up.

Whether Faerûn or The Lands Between, stalking the wilds takes some expertise – learn the ropes with our DnD Ranger 5E class guide. 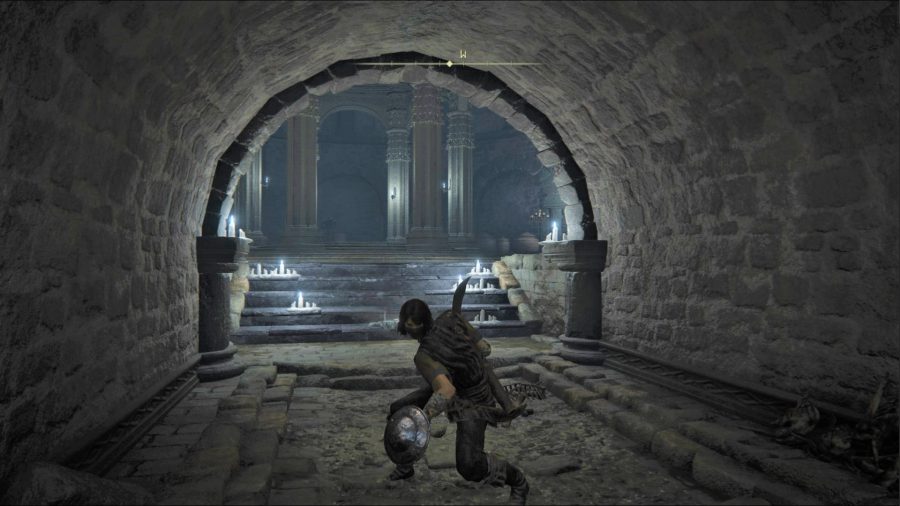 Just start as a Bandit, okay? It’s by far Elden Ring’s closest class to a DnD Rogue. It’s also worth picking the imp spirit ashes as your starting gift too, because they inflict bleed.

Then, head over to the river north of where the dragon is in the starting area and you’ll nab yourself a weapon called ‘Reduvia’ from an NPC invasion on a river. This is a legendary weapon that deals excellent bleed damage, and has an ability that shoots out bleed-inducing projectiles. That’s it, that’s the build. 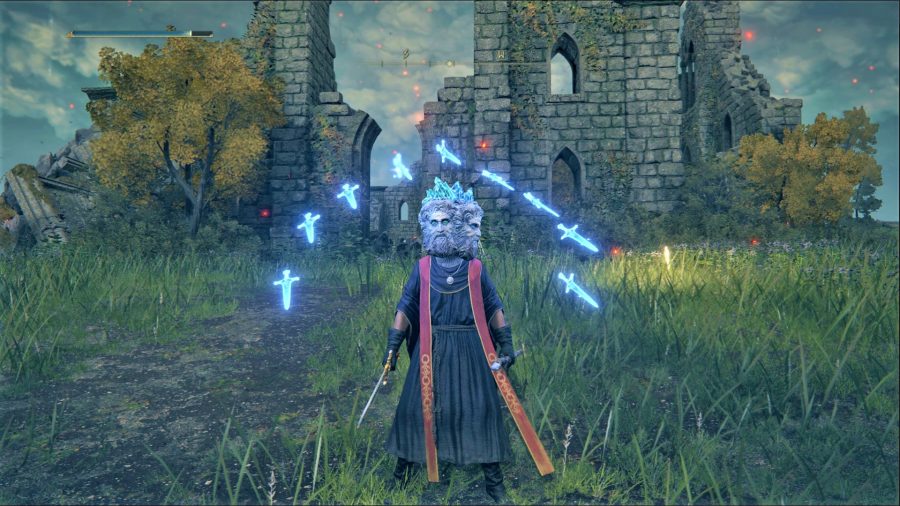 A Sorcerer should start off as the Astrologer Elden Ring class. This is the de facto mage build, and comes with two useful spells straight out of the gate.

You’ll be mainly pumping points into Intelligence for this class, and other than that, just keep an eye out for the sorceries that are dotted throughout the world, and the scrolls that can teach them.

If you need a good teacher, you can find one in Limgrave in the ruins with the big flower in it near the caravan being towed by trolls.

Natural magic flows in a Sorcerer’s veins – but there’s still a lot to learn from our extensive DnD Sorcerer 5E class guide. 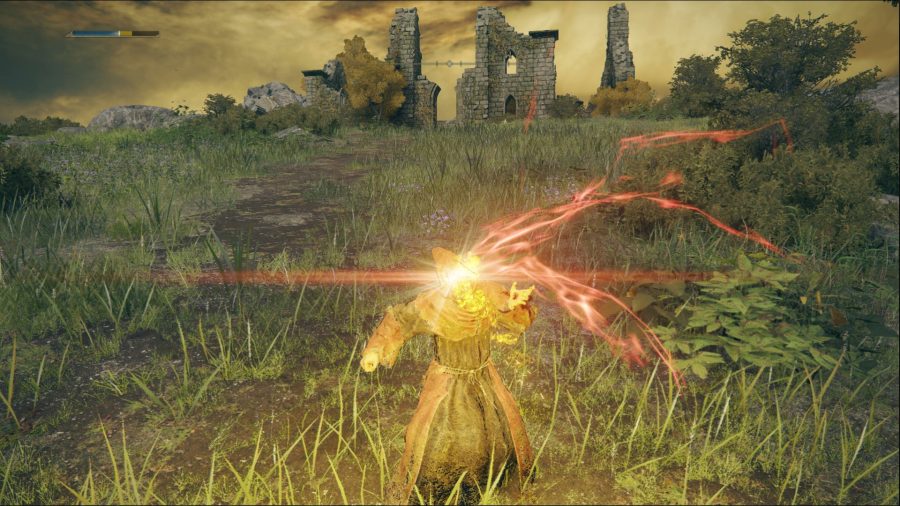 Warlocks are hard to represent in Elden Ring, because you can’t make deals with otherworldly beings here.

What you can do, however, is start off as the Confessor class and keep an eye out for spells like The Flame of Frenzy (which can be found on the landmass to the south of where you start).

These incantations require faith, and cause your frenzy to build up as you cast them, but are also incredibly powerful. You’ll also eventually get the chance to be branded by a creepy hand, so that’s nice (and very Warlocky).

Back in Dungeons and Dragons, the Warlock’s path is a dark and dangerous one – follow our DnD Warlock 5E class guide for tips. 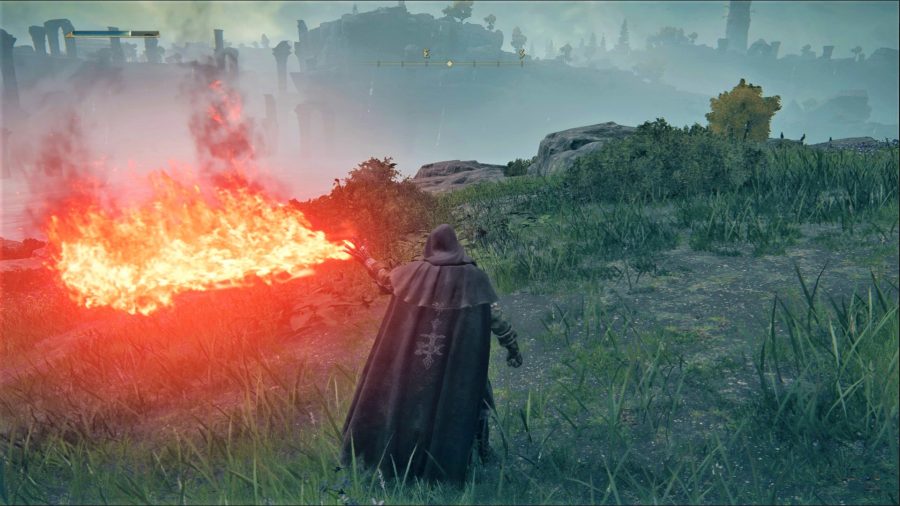 Wizards are masters of all kinds of elements and spells. You could choose either Sorceries or Incantations for this, but our preference is the latter.

That means you’ll want to start as the Prophet – as that’ll give you a fire spell straight away (not quite the classic DnD Fireball, but this is Elden Ring; you’ve got to start small and grind your way up). From here, you can find incantations that control lightning, fire, the earth, and even holy spells as well.

Jason is a Magic: The Gathering player more interested in mechanics than anything else. Now writing freelance, he loves ro build, play, and rebuild stupid MTG decks. You can find his work all over the place.