If you’re already a Dungeons and Dragons fan, chances are you’re more than comfortable playing the tabletop RPG version of this fantasy classic. What more could you need for an evening of fun than some pencils, paper, and polyhedral die, right? You likely like to kick it analogue style.

However, there’s a whole world of people out there discovering the joy of tabletop games through digital mediums. Turns out, D&D games have just as much lore, worldbuilding, and turn-based entertainment to offer. Wizards of the Coast cottoned on to this long ago, releasing its first digital adaptation of D&D way back in 1988 – and the titles haven’t stopped coming since then.

If you’re new to D&D, or perhaps to D&D games in particular, you might be wondering where to start. Well, look no further, brave adventurer, for this guide can point you to some of the best and biggest D&D videogames that you can play today. Whether you’re after an ever-growing MMO, an intense evening of strategy, or the chance to explore the Forgotten Realms even further, this guide has something for you.

But first, a brief summary of what to expect. These are the best DnD games: 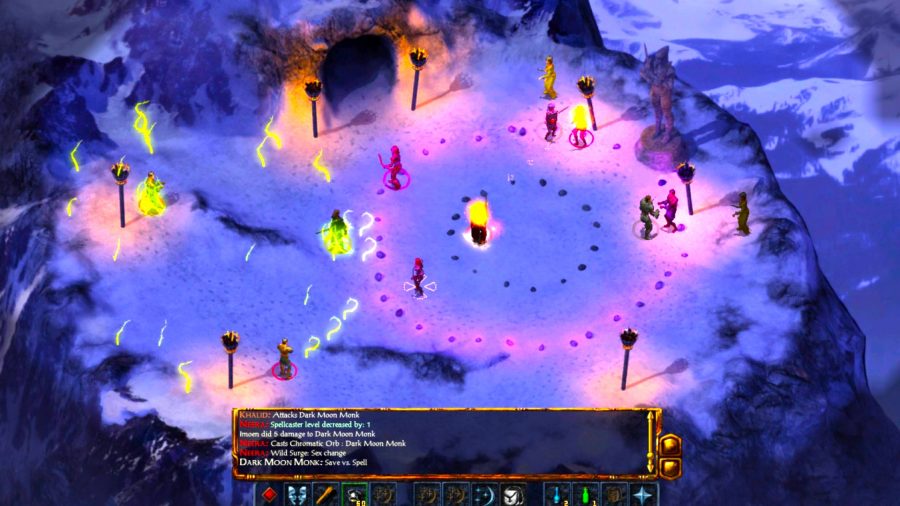 Baldur’s Gate is a videogame series with so much success behind it that you may have already heard of it – even if you’ve never heard of D&D. The titular Baldur’s Gate is, in fact, one of the most prominent DnD cities in the world of the Forgotten Realms. The place has a reputation for treachery and death – which, of course, makes it an ideal setting for a videogame RPG.

The original Baldur’s Gate was developed by BioWare in 1998, and it was based on the rules of Dungeons and Dragons 2E. If you’re after a videogame that’s faithful to the original TTRPG experience, Baldur’s Gate is your best bet thanks to its recreation of classic D&D mechanics, exploration, and roleplay. You can pick up Baldur’s Gate: Enhanced Edition to play the original with some modern-day enhancements, or you can choose from one of the many more recent instalments in the series – which is soon to include Baldur’s Gate III. 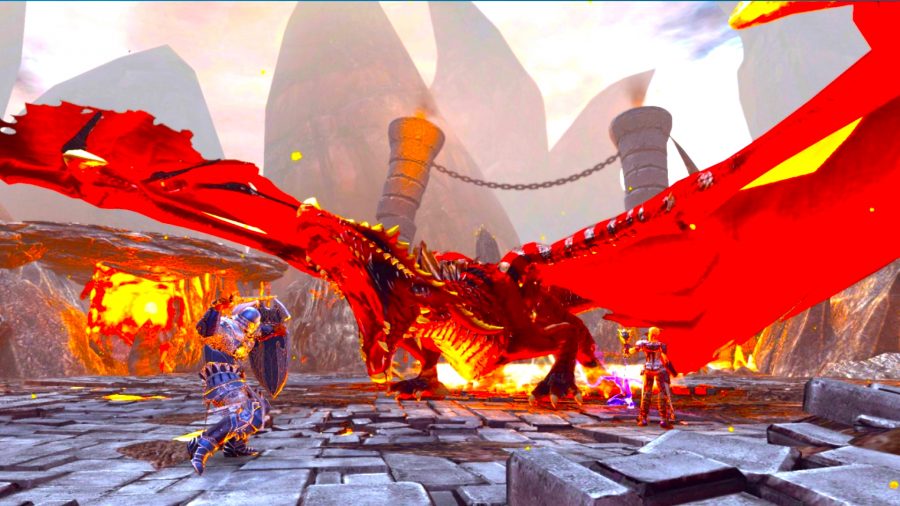 In a typical, tabletop game of D&D, you can expect to play with around two to ten other people (depending on how ambitious your Dungeon Master is feeling); a massively multiplayer online (MMO) game like Neverwinter, however, means you could play D&D with a much larger pool of roleplayers. While storytelling and five-person parties still take a front seat, it definitely has the free-to-play MMORPG skeleton that seasoned gamers will be familiar with.

Neverwinter was based on DnD 4E

Neverwinter is also named after a city in the Forgotten Realms (videogame developers sure do seem to love doing that). It’s a city that was once fraught with turmoil, and is only now managing to claw its way back to stability. The Neverwinter videogame sticks close to this original lore, having players take up arms to defend Neverwinter and help it rise from the ashes of its past.

Neverwinter was originally based around the mechanics of Dungeons and Dragons 4E, but it has been updated over the years to better reflect D&D 5E. This includes story links to popular D&D 5E adventures like Tyranny of Dragons. 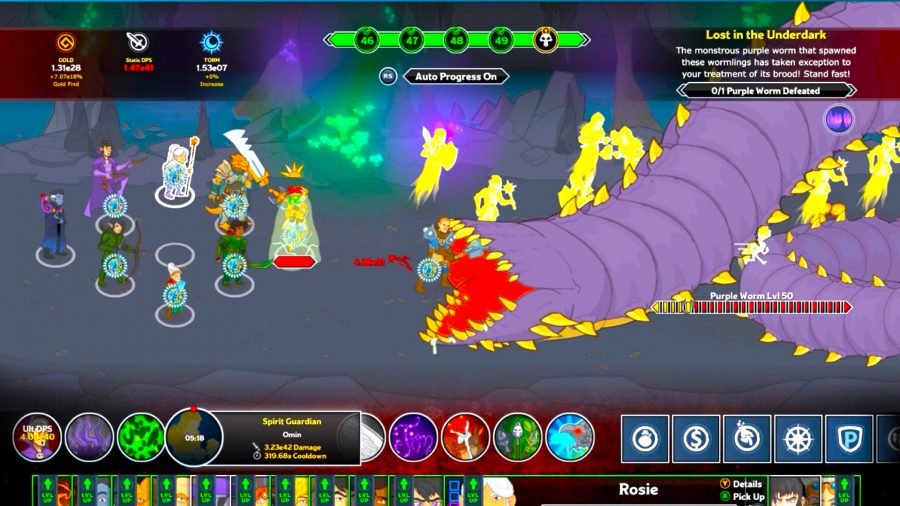 Idle Champions of the Forgotten Realms

Looking for a way to enjoy D&D that’s a little less rules-heavy? Idle Champions of the Forgotten Realms might be the game for you. This is a free-to-play strategy management game where you collect various adventurers with different abilities, form a party, and send them off to battle bosses in various DnD settings in your stead. There’s loot and level-ups in it for you, too.

Plane and simple: Here’s a guide to D&D planes

The phrase ‘idle’ in the title comes from the idea of an ‘idle game’ or ‘incremental game’ – these are games that ‘play themselves’ to a certain degree. Like a simulation game, the strategy comes from managing a resource (here your adventurers and their abilities) rather than engaging in an activity like combat. We did say this was one of the less intense D&D videogames. 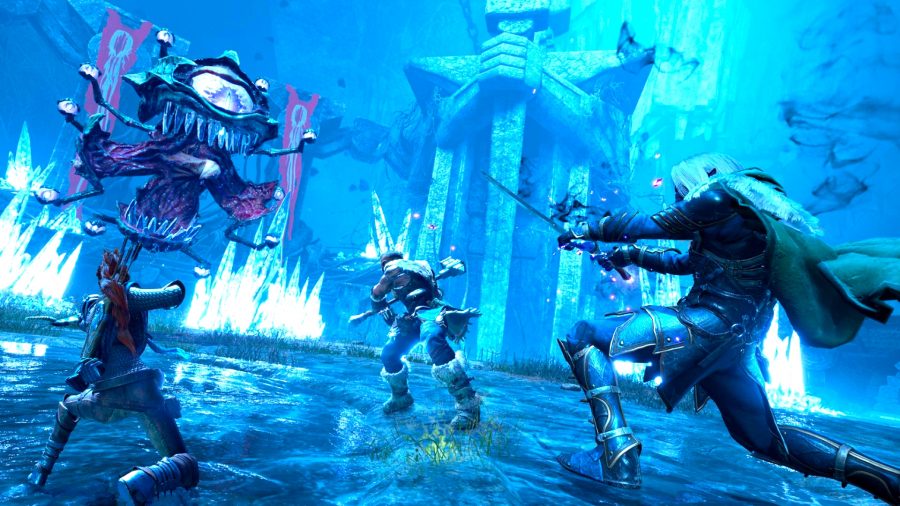 Dark Alliance is aimed at a more mature audience

This version of Dark Alliance is set in Icewind Dale – a name you might recognise if you’ve ever encountered the D&D adventure Icewind Dale: Rime of the Frostmaiden. Dark Alliance drops you into a snowy tundra, where you (plus three other players, if you’re playing co-op multiplayer) take control of four characters – who are actually all from The Legend of Drizzt, a fantasy series set in the Forgotten Realms.

Dark Alliance is more like what you’d expect from an RPG videogame than a tabletop RPG; however, you might want to check out our DnD Dark Alliance review before you decide whether it’s for you. It’s also aimed at a more mature audience – so probably not a game to pick up if you’re looking for a family experience. 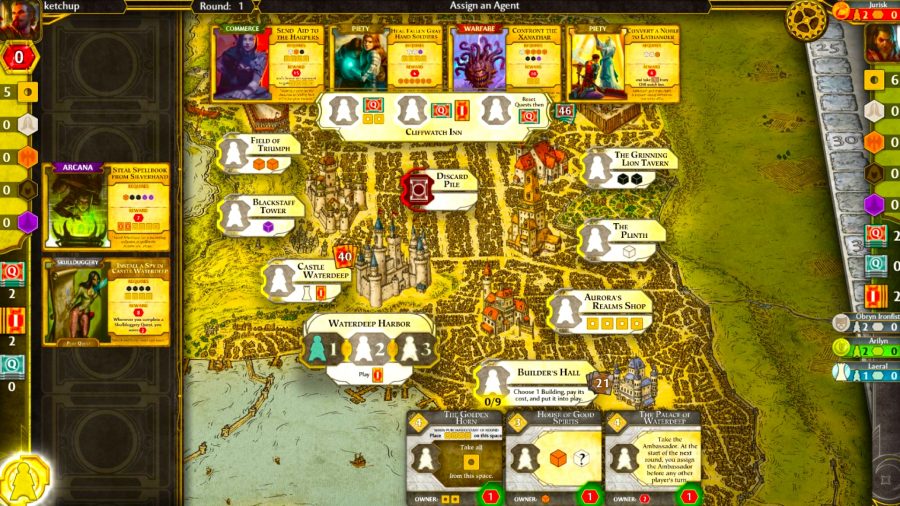 If you want to play something that’s truly faithful to the tabletop experience, you might want to pick up Lords of Waterdeep. Yes, this really is just a digital port of the classic D&D board game of the same name – but sometimes that’s the perfect kind of videogame to scratch the D&D itch.

Mystical treasures: These are the best DnD 5E magic items

Lords of Waterdeep places you in the role of one of the rulers of the famous D&D city Waterdeep. To win, you’ll need to earn points by assigning your underlings to various tasks – whether that be completing quests or constructing buildings. Manage your people well enough, and your wealth and control over Waterdeep will grow. There’s plenty of strategy here, and the turn-based gameplay that’s been translated from the board game offers a slower, more thoughtful videogame experience compared with some of the real-time alternatives in this list.