D&D is a big game in more ways than one. It’s the original tabletop RPG, it continues to grow in popularity year on year, and has spawned countless fantasy tropes that have seeped into the pores of pop culture. But it’s also extended its reach on the tabletop, spawning a number of Dungeons and Dragons board games.

Better yet, many of these Dungeons and Dragons board games are outright stellar. Some streamline the RPG’s core mechanics into new systems, while others repurpose its staple characteristics to create something totally distinct. In other cases, a classic D&D setting is used as a thematic base on which to build a stellar game in its own right.

But regardless of what makes each of these games a D&D board game, you can be sure they’re all guaranteed to appeal to a fan of the classic RPG. When you don’t have time to launch into another campaign, or you just aren’t feeling the pull of roleplay, take one of these games for a spin, and you’ll capture the same magic.

Count those spell slots and roll for initiative, because these are…

Here are the best Dungeons and Dragons board games: 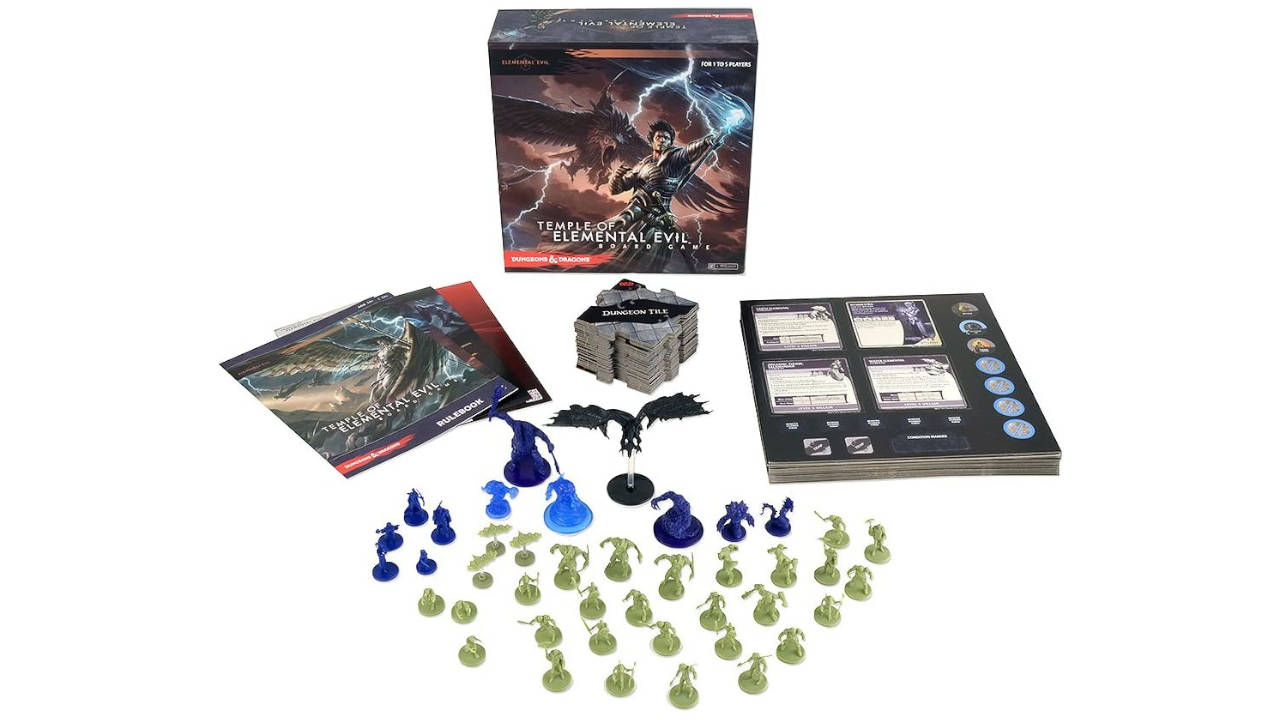 A co-operative dungeon-crawler that condenses the best parts of D&D’s frenetic combat into a series of modular scenarios, Dungeons & Dragons: Temple of Elemental Evil is the fourth instalment of the D&D Adventure System board game series. It operates much like any typical roleplaying campaign: band together with your friends, select a hero, and go dungeon diving, while slaying enemies, and earning yourself some treasure and XP along the way.

But like the other board games in this series, Temple of Elemental Evil does away with character roleplay and narrative campaign progression in favour of combat. Kick down the dungeon door and wave your sword at whatever horror awaits you on the other side. There’s some vague flavour text about why you’re tumbling into this obviously inhospitable temple complex, but don’t worry yourself about it. This board game is all about the fight.

The game does, however, go some way to improve upon its predecessors. The first in the series to introduce a persistent campaign setting, the game records your character levels, and its loot system does a better job of coping with the changing players. Traps, too, are overhauled to add more complexity. While it might not be the deepest dungeon-crawler around, and can’t hold a candle to the refined deck-building system of Gloomhaven, it suitably captures the D&D formula. When you’re short on players, or are stuck without a DM, it can substitute as a nicely streamlined campaign.

It’s also a goldmine for D&D miniatures. The Adventure System board games have long been a treasure trove for players after an easy means of acquiring some visually appropriate minis for their campaigns. Packing bugbears, cultists, elementals, troglodytes, a giant, and a black dragon, you get a great board game, as well as some super sculpts. 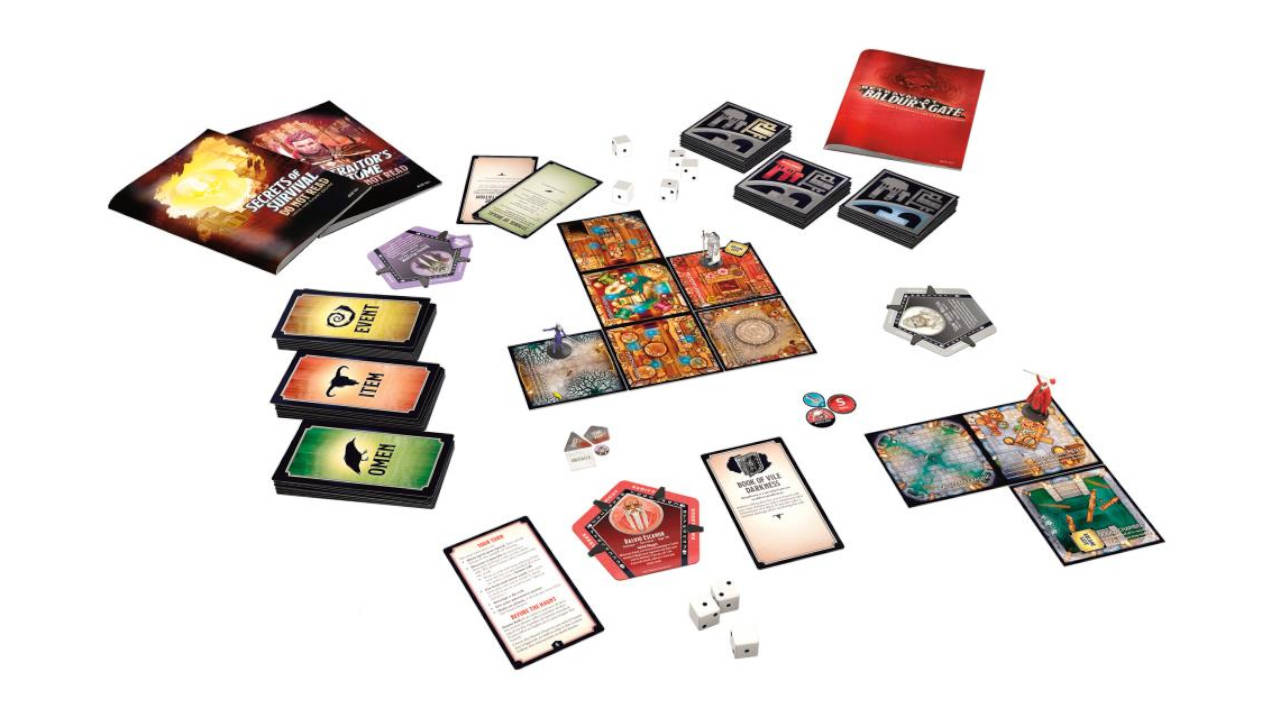 Betrayal at House on the Hill is one of the best social deduction board games around, and this D&D spin-off transports its traitorous flavour of B-movie horror to the Forgotten Realms. Set in the titular city, your band of adventurers will explore its dark alleys and suspicious gangways, uncovering the sinister, supernatural happenings that lurk in the shadows.

Walk around the modular map, discover rooms, and explore their contents for useful items. You’ll surely need them, because the pace of the game quickly changes from suspicious exploration to terrifying escape. One of your friends will fall to the evil forces, and turn against the rest of the crew. Any adventurers with their sanity left intact must try to escape, while evading the darkness that threatens their life, and that of the city.

Betrayal at Baldur’s Gate is almost identical to its predecessor, simply swapping out the classic haunted-house theme for supernatural terror. But there are some noticeable changes, most of which make for welcomed improvements. Haunts activate later in the game, preventing any irritatingly unfair early-game upsets, and player Adventurers are given greater specialisations.

While the game doesn’t try to replicate D&D in the slightest, a few nods to items, spells, races, and classes, prevent it from feeling like merely a generic fantasy reskin. Betrayal at Baldur’s Gate is a fantastic pick if you’re wanting to pick up a D&D board game for the theme, rather than the gameplay. 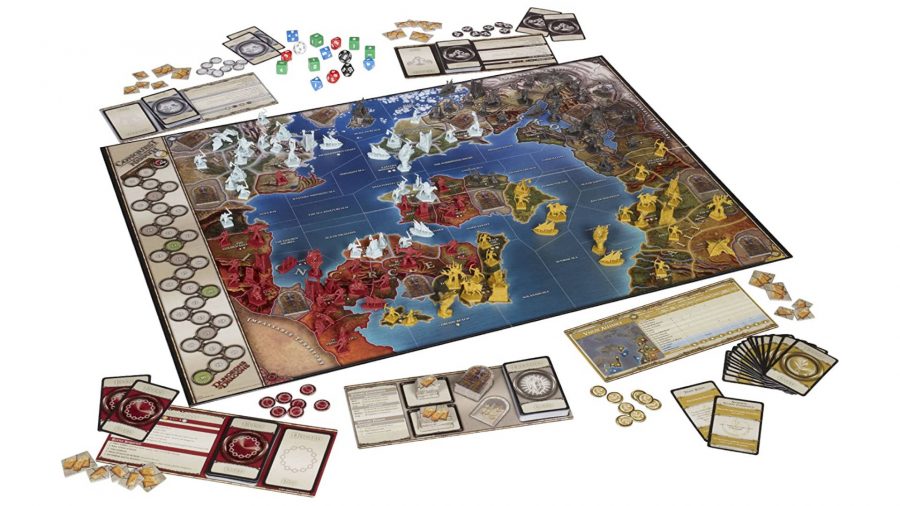 For all its character progression and focus on the personal struggles of heroic adventurers, D&D is sometimes at its best when it goes big. When the fate of whole cities hangs in the balance; when entire Realms are crushed under dark forces, and huge armies of peoples battle for domination of the known world. If this is your thing, then Conquest of Nerath might be worth a look in.

A game of territory conquest (or ‘dudes on a map’ if you’re feeling really on-the-nose), four players build a force to distribute and battle around the map, as they obtain territory, feed their war machine, and ultimately secure enough Victory Points to win. Its core gameplay will be familiar to anyone who’s taken Risk or Axis and Allies for a spin, complete with various rules about unit movement, alliance formations, and attacking by land or sea. But a few novel rule alterations make Conquest of Nerath stand out. Players can dispatch brave heroes to complete side quests for valuable treasure, and event cards will tip the balance of power in a crucial fight.

It might not be the most innovative map conquest game, but it’s a solid all-round choice. Bear in mind its style of play, though. You won’t be luring your opponent into clever, calculated defensive traps, so much as simply plunging forward as soon as your troops are on the field. Aggression is rewarded above all else. 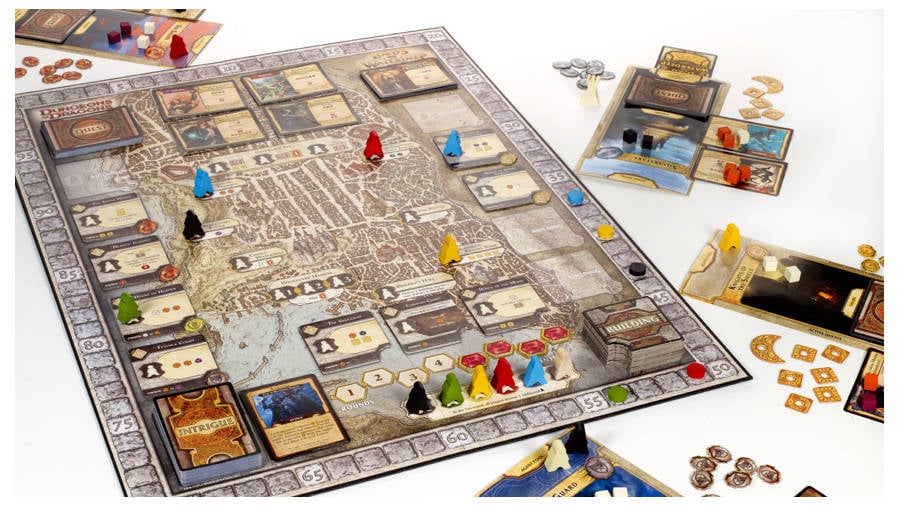 Waterdeep is a classic city of the Forgotten Realms, and Lords of Waterdeep has become something of a classic D&D board game. Taking the role of one of the city’s secret rulers, you’ll be jostling for influence over its illicit commercial interests.

At its heart, Lords of Waterdeep is a worker placement game. Assign agents across the board to purchase new buildings for your criminal syndicate, hire adventurers to complete tasks, funnel resources into your pockets, and complete quests for bonus rewards. Intrigue Cards allow you to throw a curveball at your opponents, disrupting their plans or boosting yourself, so they’ll have to change course. Each player takes the role of a different Lord, granting distinct means of acquiring points, and directing your scheming throughout the game.

Digital dungeons: These are the best DnD games

But Lords of Waterdeep isn’t the complex eurogame it sounds like; it’s actually rather simple. Not shallow enough to feel underwhelming, nor a challenge for more seasoned eurogamers, it positions itself just right for D&D fans who want to explore the tabletop outside of the Theatre of the Mind.

And the city of Waterdeep works wonderfully as a setting. Prosperous and cosmopolitan, its lords live in luxury, ruling over a city of enviable cultural wealth and historical significance. But the downtrodden ordinary folk below eke out a precarious existence, beholden to criminal syndicates propped up by the city’s secret rulers. Those who have explored its seedy corners and grimy passageways when roleplaying will especially enjoy the board game’s ability to replicate the commercial intrigue and skulduggery of the City of Splendors. 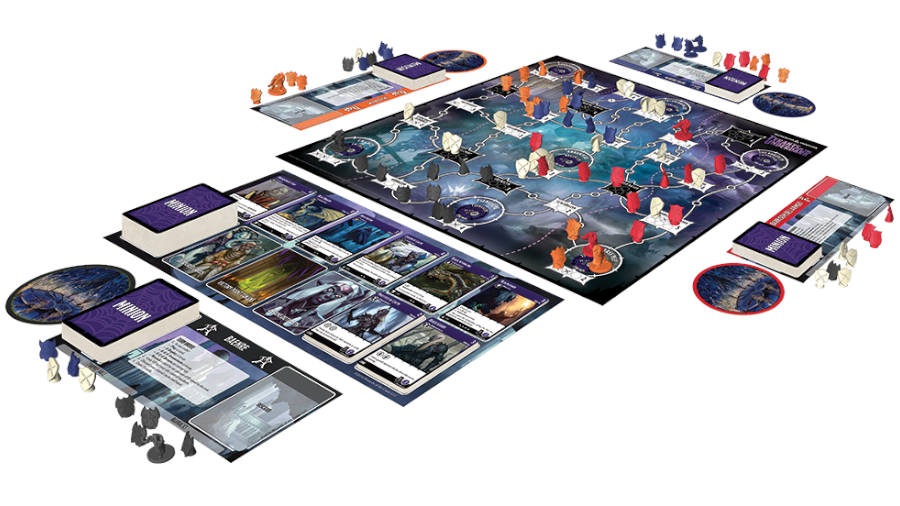 Tyrants of the Underdark

An enticing mix of genres, Tyrants of the Underdark combines area control and deck-building into a game of furious fighting. Themed around D&D’s resident evil elves, you’ll take command of a powerful Drow house, battling for domination in your sunless homeland.

A fine balance between deck curation and area expansion

The area control half of the game comes through on the board, as you distribute minions to various locations. Spread yourself thin to capture more territory and resources, or bolster thick lines of troops to hold off incoming attacks. Your deck, meanwhile, is used to summon more troops to the field, assassinate those of your enemy, or buff up your forces. The kicker is that, to get more troops, you’ll need more cards – but, to add more cards to your deck, you’ll need to take more territory, and field the troops to hold them.

Its fine balance between deck curation and area expansions makes for a heady mix of strained decision-making, and one that will leave you racking your brain trying to think of the next best move. Take it for a spin if you’re after a deck-builder with plenty of player interaction, or an area control game with a twist.