D&D memes? Of course they exist! Memes seep into everything. You can’t spend a minute on the internet without stumbling upon at least one picture, gif, or tweet that makes a supposedly hilarious in-joke about some subcultural happening. They’re everywhere – and Dungeons and Dragons memes are certainly no exception.

The biggest tabletop roleplaying game in the world has spawned an eclectic community of diehard fans and casual hobbyists. Their love of D&D might unify them, but their appreciation for the odd bit of memery is also surely shared. Whether it’s joking in self-deprecation about homebrew rules, japing in shared irritation at disruptive players, riffing on D&D lore, quietly venting about DM hardships, or regurgitating yet another Alignment joke – there’s a meme for everything.

And we’re pretty sure you’d like to see some real crackers. As with the best Warhammer 40k memes, we’ve combed the internet archives to serve up this list of the very finest D&D memes, which will have you cackling in hysterics (or more likely grunting in expressionless amusement, as you scroll down the page). That’s fine, we’ll take what we can get.

For those new adventurers among you, we’ve even provided a little bit of context. 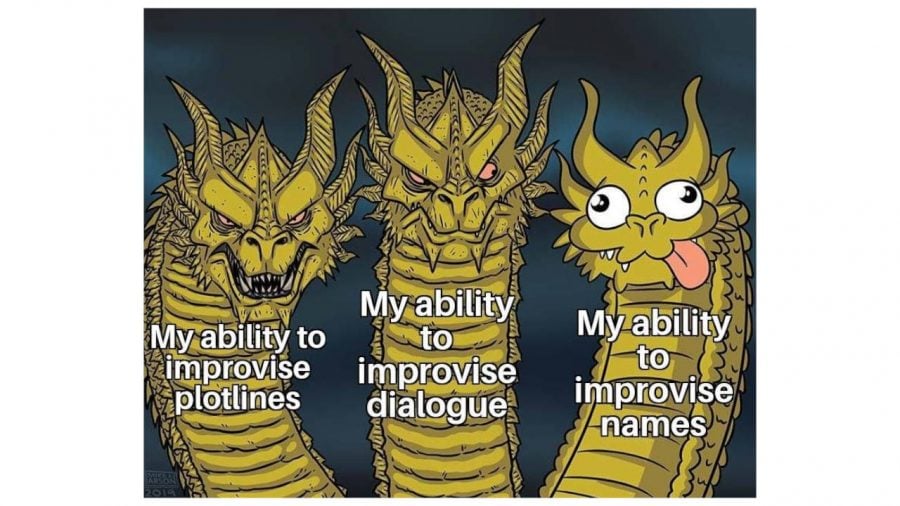 Let’s start light. D&D asks a lot of the DM. They’ve got to plan an adventure, commit it to memory, internalise the game’s rules system until they can recite it in their sleep, and gently mould the pace, themes, and flow of the game in response to player demand. But most challenging of all, they’ve got to improvise.

Templates: These are the best D&D character builds

Is there anything harder than thinking up an NPC name off the cuff? One that’s appropriate to D&D’s fantasy world, distinct from the 100 other names you’ve had to suddenly splutter in the past, and isn’t obviously nabbed from whatever TV show you’re binging at that moment? In even the most minor NPC encounter, every DM desperately hopes their party won’t ask that terrifying question: “what’s your name?”. 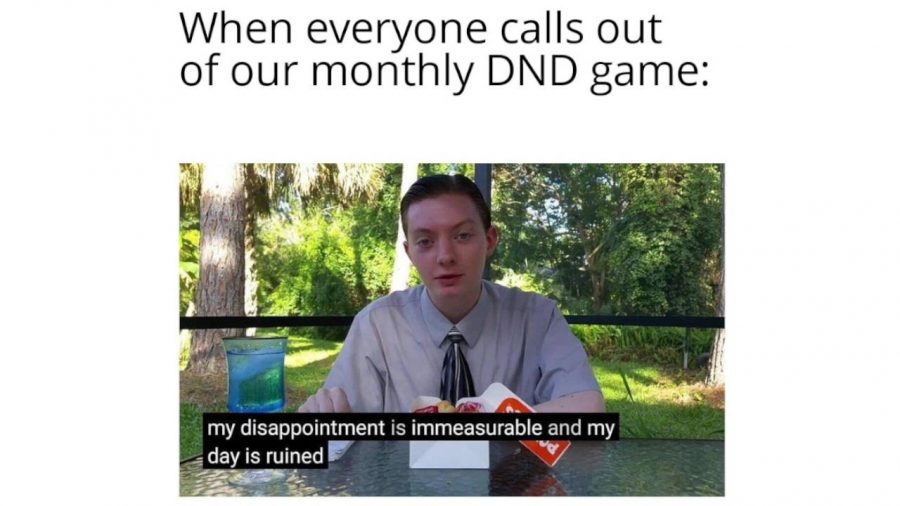 This one likely hits home for a lot of folks out there. You’ve spent the past three nights planning this week’s adventure, refining plot beats, and injecting moments of optional exploration. You’ve tried your hardest to make sure combat encounters are balanced, and you reckon this puzzle room might damn well be your best yet.

But tragedy strikes. The party Cleric bails an hour before the session, citing some excuse about an ‘emergency hospital run’, or some equally ignorable reason. The Warlock soon pulls out, and mumblings start rising in the group. A third player suddenly remembers they’ve got an urgent errand to run, and the final two suggest that the game can’t really continue with only a couple of players.

You sit alone; a pouch of dice in one hand, and your DM screen in the other. A sad sight. A sad day. But a great meme to push you through the despair! 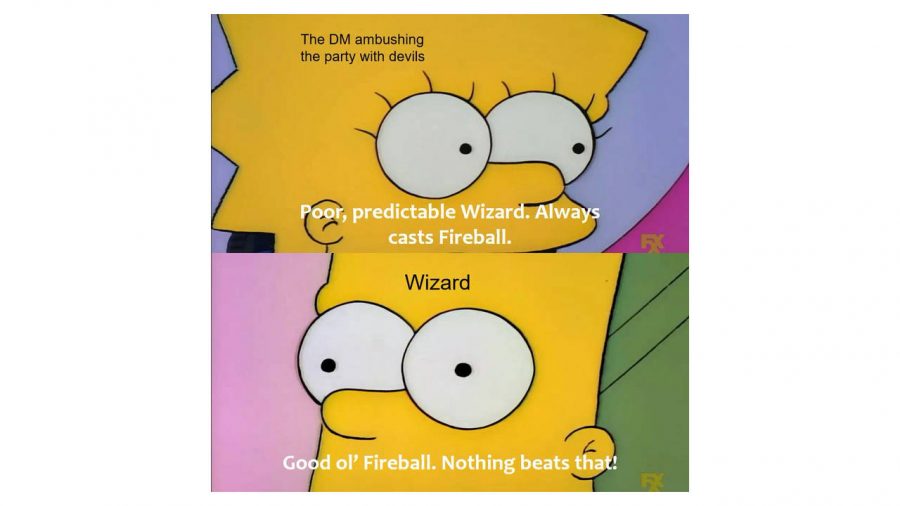 Some parts of D&D’s metagame never change. Fireball might be the most notorious D&D 5E spell around, and was a staple of past editions. Many low-level Wizard builds are constructed entirely around the spell, and players frequently rely on it for unrivalled damage dealing. So much so, that many would-be archmages think of it as a surefire way of grabbing the limelight in their party.

Which makes it especially fun for DMs to scupper its use. Send your players down a dungeon strapped with explosives, which might go off from the mere whiff of a flame. Or, in this meme’s case, send a bunch of fire-immune Devils their way. Anything to show that upstart Wizard who the real boss is. 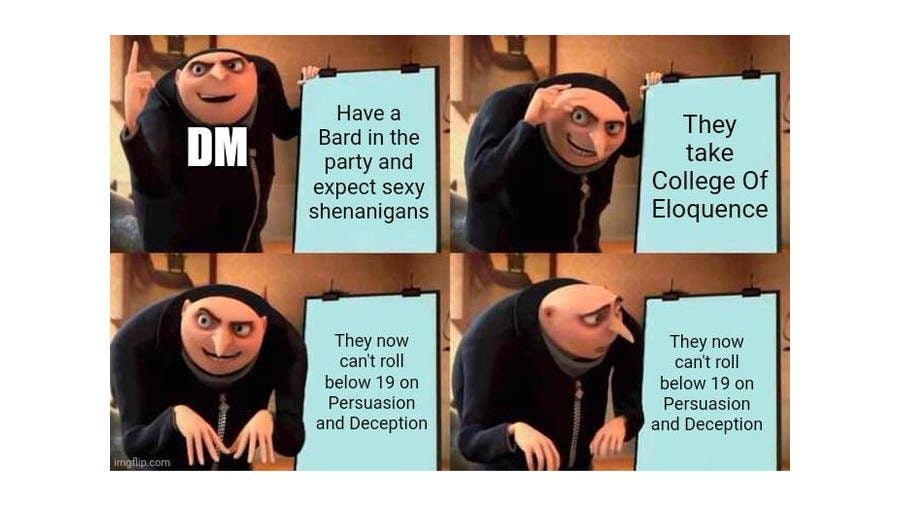 You could spend hours constructing a D&D character build, carefully min-maxing every stat, and tailoring its abilities to suit your party. It’s demanding, engrossing, and it’s damn rewarding. For everyone but the DM, that is, who now has to contend with a powerhouse of a Paladin that can breeze through their carefully planned encounters, or a Fighter that can make mincemeat of everything thrown their way.

Bards are ripe for exploiting. Pick the College of Eloquence at level three, and all Persuasion and Deception checks that roll nine or lower will automatically be treated as a ten. You’ll never roll low again, and can leverage class proficiencies and expertise to ensure all your rolls will be the envy of your party.

Game breaking? Not at all. It just requires a little more creativity from your DM. 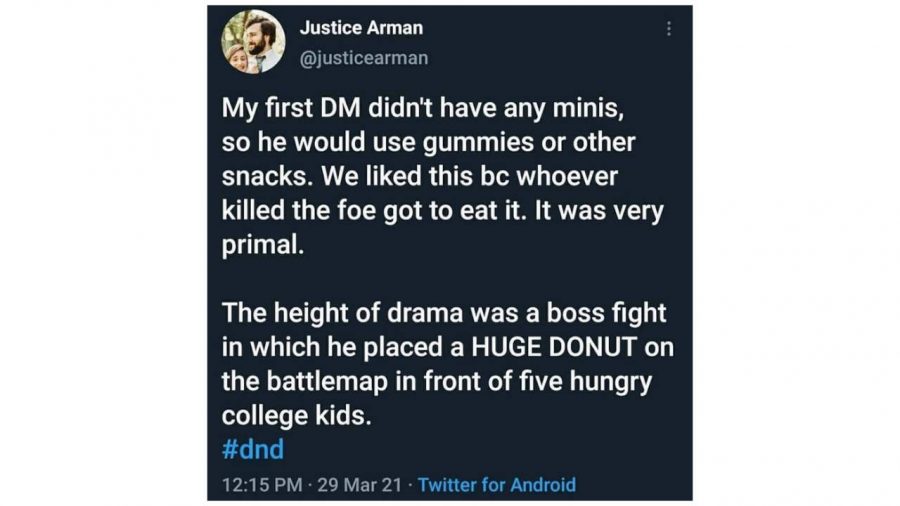 Whether tweets can correctly be categorised as memes is a debate best left to another time. For now, we’ll assume they can. And if they can, this has got to be one of the most galaxy brain D&D memes around. The kind of meme that makes you throw out your collection of meticulously painted D&D minis, and immediately set about implementing a food-based reward system into your next campaign.

Kick-ass creatures: These are the best D&D monsters

But we think there’s room for improvement. Upping the sweet size for larger monsters is a good base, but what about mixing a thematic element into your snacking? Fighting a bunch of undead? The crunch of a peanut M&M seems appropriate. Cleaving your way through corridors of aberrations? Liquorice might be a good fit. Battling a bunch of oozes? It’s got to be wine gums. More food can only mean a better game.