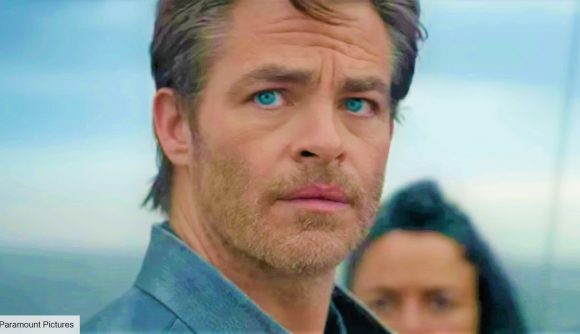 A brand new trailer for Dungeons and Dragons: Honour Among Thieves was revealed at San Diego Comic-Con on July 21, and it’s jam-packed with magic, iconic monsters, and James-Gunn-style snark. Comic-Con also provided our first look at the character classes each actor portrays – and, in a move that shocks no one, the handsome and charming Chris Pine is playing a Bard.

Seen swanning or swashbuckling through various DnD settings in the trailer (we’re predicting trips to the Underdark, Icewind Dale, and cities like Waterdeep), Pine’s character Edgin is accompanied by a team with diverse skill sets. Michelle Rodriguez plays Holga the Barbarian, and Regé-Jean Page is a Paladin who possibly put all their points into the Charisma stat.

We also have Sophia Lilis as Doric the Tiefling Druid, Hugh Grant as Forge the grinning Rogue, and Justice Smith as Simon the Sorcerer. It feels fitting to have Detective Pikachu star Smith on the roster – the bestiary of famous monsters in Honour Among Thieves seems designed to have us leaping and pointing just like we did every time Detective Pikachu put a Bulbasaur on screen.

The official synopsis for Honour Among Thieves is heavy on the epic quest but light on plot reveals. “A charming thief and a band of unlikely adventurers undertake an epic heist to retrieve a lost relic, but things go dangerously awry when they run afoul of the wrong people”, it explains.

In a recent interview with Entertainment Tonight, Chris Pine described Honour Among Thieves as “Game of Thrones, the Princess Bride, and a little bit of Spinal Tap”. The similarities between Honour Among Thieves and Guardians of the Galaxy don’t escape the interviewer, though, and neither have they escaped the notice of the internet.

the cast and their class, a 🧵 pic.twitter.com/5LkHUKkrdu

Dungeons and Dragons: Honour Among Thieves will release in March 2023.