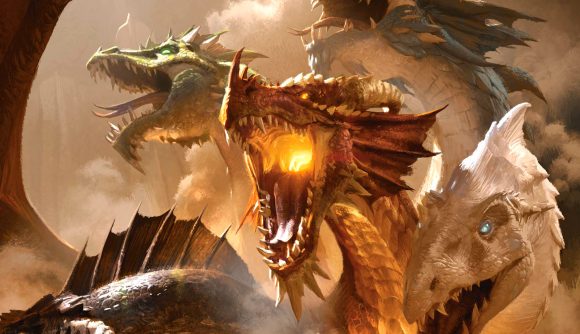 Ahead of the release of Fizban’s Treasury of Dragons next week, Wizards of the Coast has released another teaser of the upcoming D&D book. The publisher has shared the stat blocks of two creatures included in the book’s bestiary, both champions of infamous dragon gods in D&D lore: Bahamut and Tiamat.

A Dragonborn of Bahamut is a devoted follower of the titular dragon god, who reigns as a deity over all good dragonkind (usually associated with Metallic Dragons). Dragonborn followers of Bahamut try to enact his will in the world, which might not be too difficult given their stats. With an AC of 18, Str 19, and +6 in Persuasion, these guys are no pushovers. Check out their stat block below.

A Dragonborn of Tiamat, meanwhile, is a devout follower of Bahamut’s eternal rival, the five-headed queen of Chromatic Dragons – Tiamat. Embodying all things evil in the draconic world, she’s usually bad news, and her Dragonborn followers work to enforce whatever evil concoction she’s dreamt up. Although they have a lower challenge level than the Dragonborn of Bahamut, their 20 Str and proficiency in Str saving throws still makes them adept.

The reveal of the two champions suggests we can expect more lore surrounding Bahamut and Tiamat, and potentially their rivalry or scheming on the Material Plane, to be included in Fizban’s Treasury of Dragons.

However, the stat blocks also illustrate the alignment changes coming to D&D. Rather than explicitly outlining creatures’ moral leanings as 5E has done for years (or removing alignment from monster stat blocks altogether, as was done in the D&D books released earlier this year), Fizban’s Treasury of Dragons will list the ‘typical’ alignments of the creatures in its bestiary. 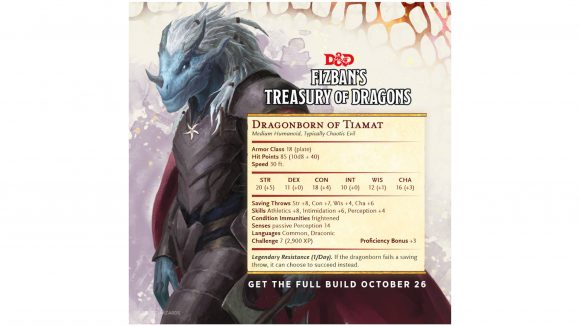 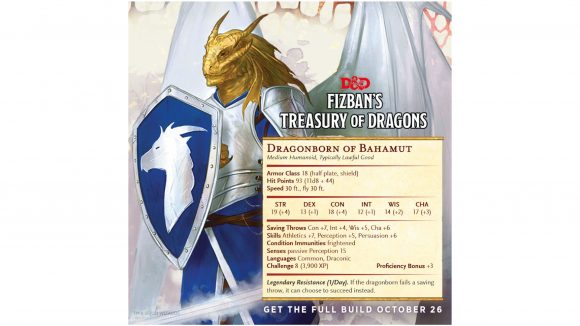 In this case, a Dragonborn of Bahamut is listed as “Typically Lawful Good”, while a Dragonborn of Tiamat is written as “Typically Chaotic Evil”. The intention is to reinforce the idea that the behaviours of creatures and characters isn’t determined by race, and DM’s have the room to alter alignments as they see fit.

Fizban’s Treasury of Dragons is due to release on October 26, and can be pre-ordered now. Styled as 5E’s comprehensive guide to all things dragons, it will include a bumper crop of draconic lore, new player options for connecting your character to a dragon, a bestiary of 20 dragons, and guidance for inserting dragons into your adventures.

If you’re looking for some beasties that aren’t fire-breathing drakes, check out our pick of the best D&D monsters, or read our guide to the D&D 5E races.