Fallout: The Roleplaying Game, the officially licensed tabletop RPG ‘port’ of Bethesda Softworks’ post-apocalyptic open world videogame series, has to be the most visually on-brand TTRPG adaptation I’ve come across. Fallout’s distinctive, tragi-comic ‘Vault Boy’ cartoon artworks, pastel-coloured retrofuturist adverts and propaganda, and the ubiquitous blue-and-gold livery of Vault-Tec all saturate the rulebook’s 430 tight-packed, glossy pages. Even merely as hardback eye-candy, its looks are worth the asking price.

Don’t be fooled , however – this is no superficial, low-effort, licensed cash-in. Publisher Modiphius has form for doing justice to beloved fictional worlds while translating them to the world of dice and pencils, having already used its rather well-received 2D20 rules system to make tabletop roleplaying games out of Star Trek, and, more recently, Dune. Serious legwork went into producing this game; that much is clear from the sheer number of the videogames’ mechanics, characters, concepts, and items that get their own developed tabletop rules.

I’ve so far had only a few snatched, glorious hours to trawl through Fallout: The Roleplaying Game’s core book (let alone actually play the damn thing) so by all means take this particular can of Pork ‘n’ Beans with a pinch of salt.

But even a cursory tour around this tabletop RPG left me with one overwhelming impression: that it is, first and foremost, a laudably comprehensive attempt to translate every single aspect of the more recent Bethesda videogames into tabletop form (the more nostalgic and warmly remembered by gamers, the better).

When we reported on the game’s crowdfunding launch earlier in 2021, we got rather excited about the fact that Fallout: The Roleplaying Game lets you play as a Mister Handy robot, Super Mutant, or Ghoul – but that’s honestly just the tip of the iceberg here. Let’s take a brief tour. 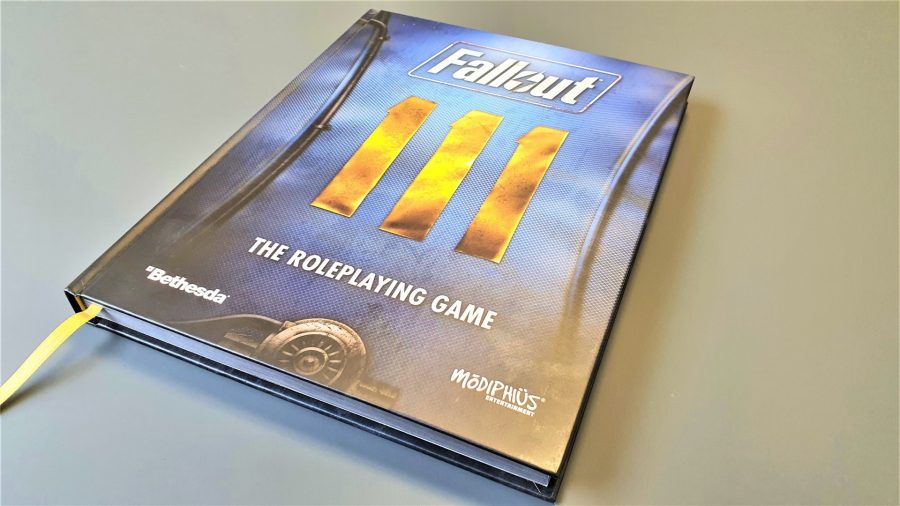 Modiphius’ 2D20 game system has two big selling points: first, the flexibility with which it allows GMs to mix and match characters’ attributes and skills to apply to specific tests; and, second, its potential for ‘push your luck’ gameplay, with superfluous successful rolls able to be banked and spent to boost other tests, or for assorted benefits.

Roll more successes than you need, and you bank the extras as AP

Fallout: The Roleplaying Game makes neat use of the former aspect; characters’ attributes (naturally) follow the videogames’ S.P.E.C.I.A.L. system, while the game’s list of Skills comes straight out of Fallout 3 – with the new additions of Athletics, Throwing, and Pilot (because you never did let me fly a Vertibird on my Xbox 360, Bethesda, you cowards). As for pushing one’s luck with stored boosts to tests, well, if you thought “that sure sounds like spending Action Points to use V.A.T.S. to kill things better” – then you’re right on Modiphius’ wavelength. Roll more successes than needed for a test, and you can bank each unneeded die as one Action Point – then cash ‘em in later to roll extra dice on another test, take extra actions on your turn, get info from the GM, or any of various other boons. 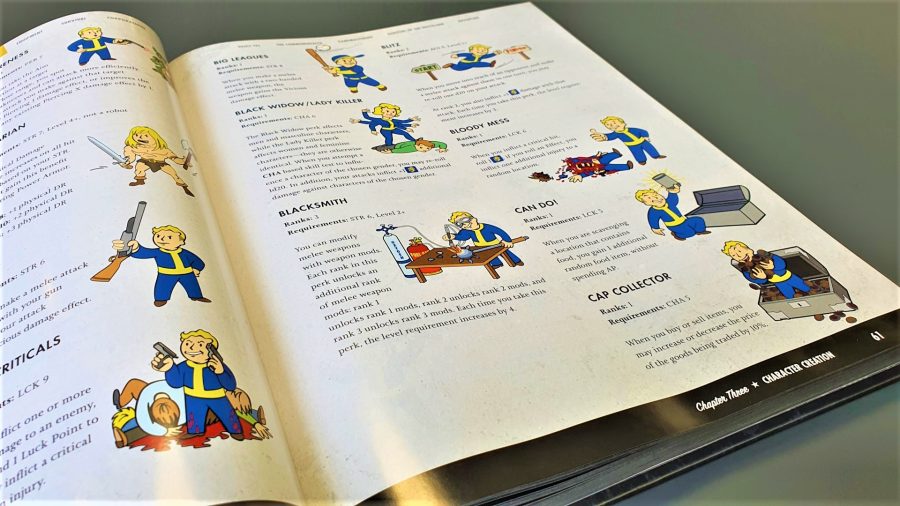 Want even more ways to swing your rolls and tell stories with dice? Lucky you. In the videogames, the Luck (LCK) attribute makes multiple, behind-the-scenes tweaks to gameplay calculations – but, in Fallout: The Roleplaying Game, Luck gets a bit more ‘hands on’.

You start each quest with a pool of Luck Points equal to your LCK stat, and can spend them to re-roll dice; interrupt the initiative order in combat; substitute your Luck stat for another attribute when rolling a test; or even make subtle, but helpful changes to the scene around you. It’s a limited system, but could go some way to recreating the sense of being a powerful protagonist that suffuses the videogame experience.

Paper worlds: These are the best tabletop RPGs

Also just like the videogames, as you level up, you’ll pick Perks that add buffs (and sometimes drawbacks) to your character, and start to shape your character’s particular profile. All your familiar favourites are back – Bloody Mess; Sniper; Lead Belly; Black Widow; Lady Killer; even the ever-entertaining Mysterious Stranger can be called upon to aid you in a fight (with a particularly beasty, stat-boosted .44 Magnum).

And guess what else pops up as a Perk? It’s only bloody Dogmeat, everyone’s favourite wasteland canine pal, complete with his own tabletop RPG stat block, and – get this – craftable dog armour. There is an entire separate armour crafting table for dog armour. It doesn’t even cost extra as DLC (only joking Todd, jeez). And, while we’re on the subject of tables… 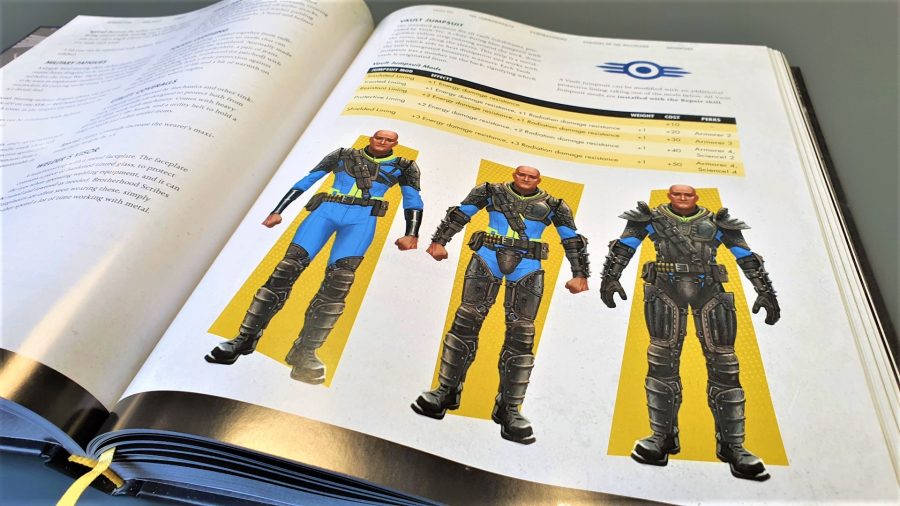 This book contains a stupendous library of stats tables for items and effects that’ll be familiar to anyone who’s played Fallout 3, New Vegas, or Fallout 4.

This book reads like the numerical backend to Fallout 4

There are 27 pages of weapons; six pages of normal armour; five types of Power Armour chassis with a variety of pieces and upgrades for each; seven pages full of chems; and a whopping 15 pages of wasteland food and drink items. On top of that, every weapon and armour piece can take a variety of craftable upgrade mods, each of which are listed in their own respective tables. The extensive, 18-page crafting system includes stats tables for reams of armour pieces, weapons, mods, chems, and food recipes that you and your party can throw together (if you’ve got the right Workbench, Cooking Station, and/or crafting ingredients). It’s positively breathtaking how much the rulebook reads like the numerical backend to Fallout 4 itself. 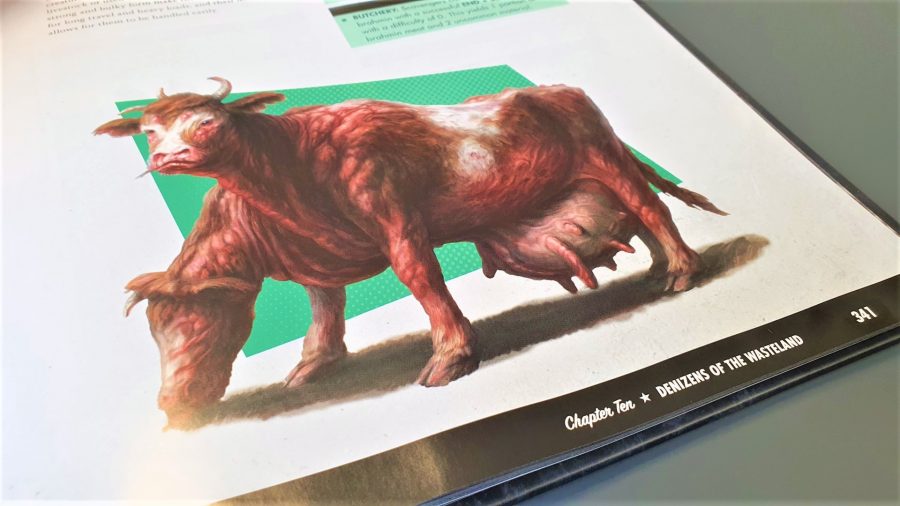 As for the rad-twisted beasts of post-nuclear America, their particulars are listed out to a T in a chunky 60-page bestiary, from Bloodbugs to Yao Guai, and Super Mutants to Synths. Gorgeous (and often gruesome) artworks abound, as do GM notes, alternate creature versions, and copious, clearly laid out special abilities.

And that’s before we’ve even mentioned the stacks of narrative background to the Commonwealth wasteland setting of Fallout 4; the entire chapters on pre-war corporations and Vault-Tec vaults; or the fully-fledged three-act starter adventure provided right in the core rulebook. This book might be a weighty tome with much to wrap one’s irradiated head around – but it makes an effort to give you ways in. 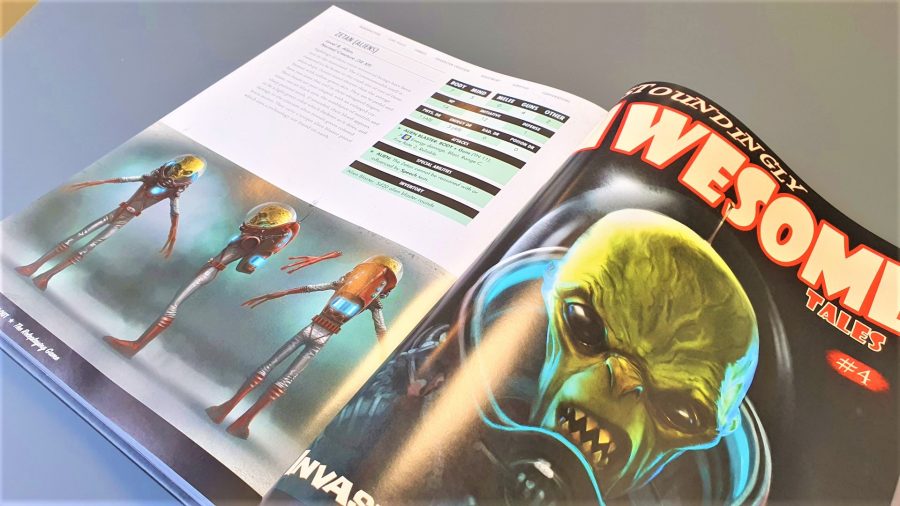 All of which makes Fallout: The Roleplaying Game less like an indirect homage to the Bethesda Fallout videogame experience – and more like an ambitious and rather spectacular bid to recreate it all for you, wholesale – insanely detailed sandbox and all. Modiphius isn’t trying to make a tabletop RPG, set in the Fallout universe; it’s trying to let you actually play Fallout 4, only without using a computer.

Which could be fantastic, or an absolute dead loss – depending, I suppose, on what sort of Fallout fan you are. Whichever way you cut it, though, it’s one hell of an elevator pitch. Personally, I can’t wait to give it a proper run for its money – I’m just waiting till I’ve saved up enough caps for the cool custom dice…