Wondering how to play Chess? You can’t go wrong with this classic tabletop game. Played by medieval monarchs and still enjoyed the world over today, its popularity is undeniable. Whether you’re a totally new player who’s picking up a chessboard for the first time, or want a quick rules refresher before starting a game, we’ve got you covered with this handy guide.

Playing chess isn’t nearly as complicated as it might seem. The game can be as enjoyable for children as it is for veteran grandmasters, and you can learn all its essential rules quickly. Even if you focus only on the basics, you’ll soon understand why it’s still considered one of the best board games around.

So, read on to learn how to play chess. We’ll walk you through all the basics, including the game’s setup, the movement rules of each piece, special moves, and even some strategies to get you started. This beginner’s guide is best for new players who are looking to play casually, and will set you up with everything you need to know.

This is how to play chess 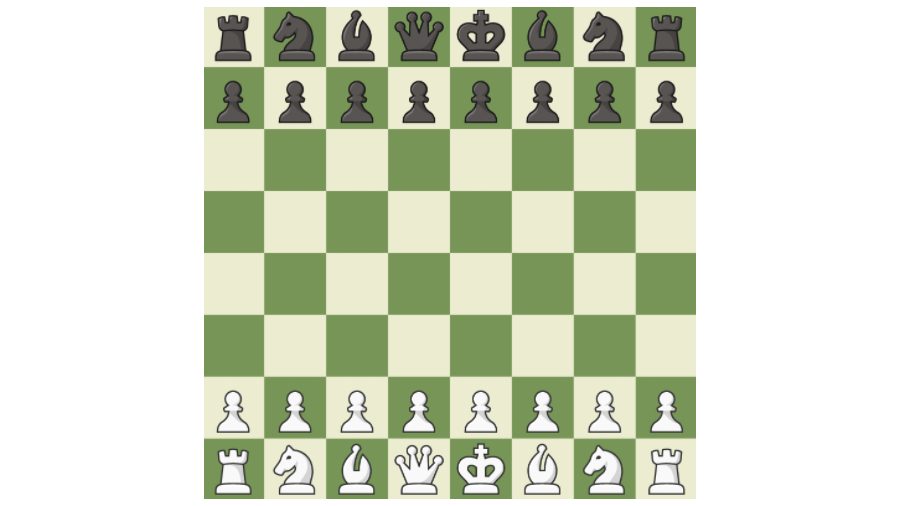 You’ve grabbed a board and a jumble of pieces, but how do you set up the game? First, make sure the board is laid out so that a white square is in the bottom right-hand corner of the sides facing each player.

Now comes the chess pieces. Each player sets up their pieces in the same way, and fills the two rows of squares closest to them. The first row (that is, the one nearest to the board’s edge), follows a specific arrangement: Rooks (Castles) are placed in each corner, Knights are next to them, and then come the Bishops.

The second row is easy to fill: place a pawn on every square. That’s it. Each player should now have two filled rows. 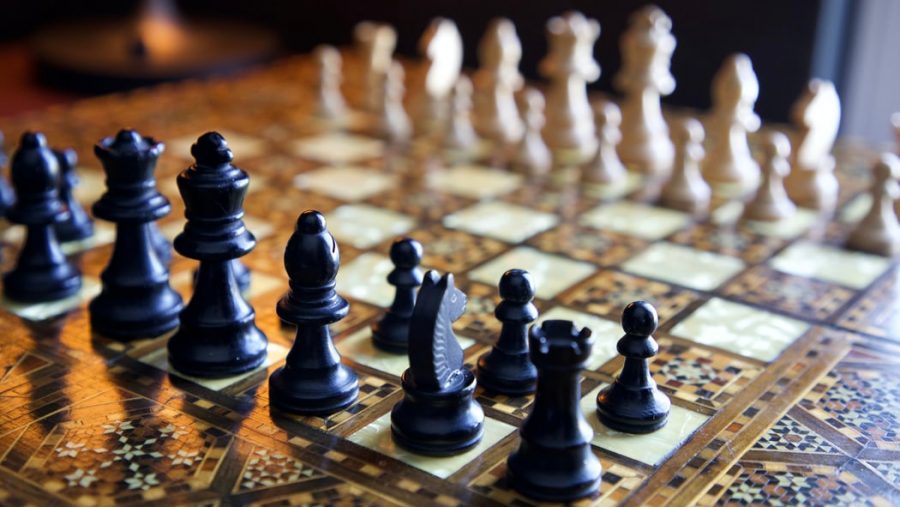 Playing chess isn’t as complex as it may first appear. Each turn, one player moves one of their pieces, with turns alternating between players. You’re never allowed to skip your go or refrain from making a move, but can move any piece that belongs to you.

But like most strategy board games, chess isn’t focused on friendly navigation, but domination. If you move a piece onto a square that’s currently occupied by an opponent’s, you’ll ‘capture’ it: permanently removing your opponent’s piece from the board, and placing your piece where it once stood.

Capturing is central to the game’s objective. When a King is put in a position where it will be captured on the next turn, they are in ‘check’. The player in check must use their turn to stop their King from being captured next turn, getting themselves out of check. They might do this by capturing the enemy piece that is set up to attack their King, blocking the attacking piece, or moving their King to another square where it is out of check. 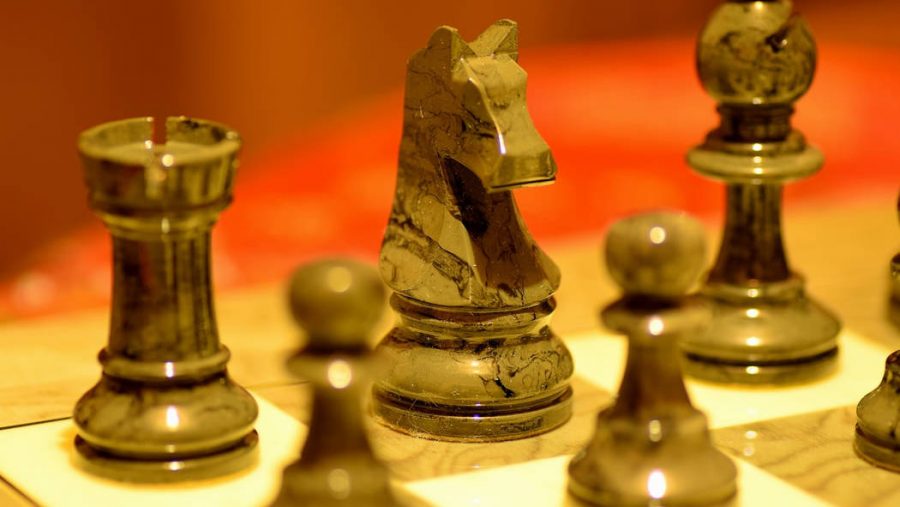 Also, you cannot make a move that you would place your King in check. That would effectively be handing victory to your opponent.

Digital tabletop: Check out the best online board games

Chess can also be won if your opponent resigns, conceding victory to you.

In every chess game, White goes first. Assign colours randomly to each player, such as by tossing a coin. 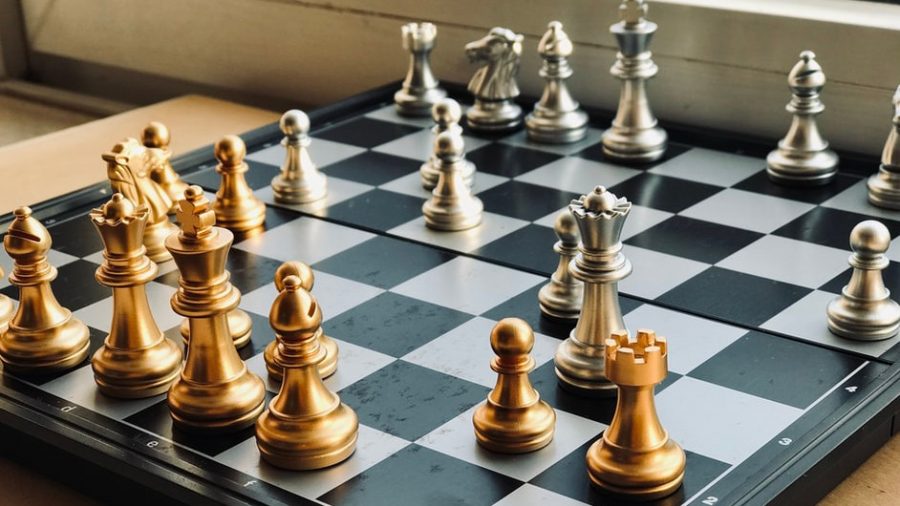 How to move chess pieces

Each type of chess piece follows its own movement rules. However, there are some general stipulations shared between them all.

However, if a pawn hasn’t yet moved (that is, if it’s on its starting square), you can choose to move it forward two spaces instead of one.

Pawns are also unusual in that they capture opponent pieces differently from how they move. Pawns capture pieces by moving one square diagonally left or right in front of them. They can’t capture backwards, and can only shift diagonally if capturing another piece, not when simply moving. 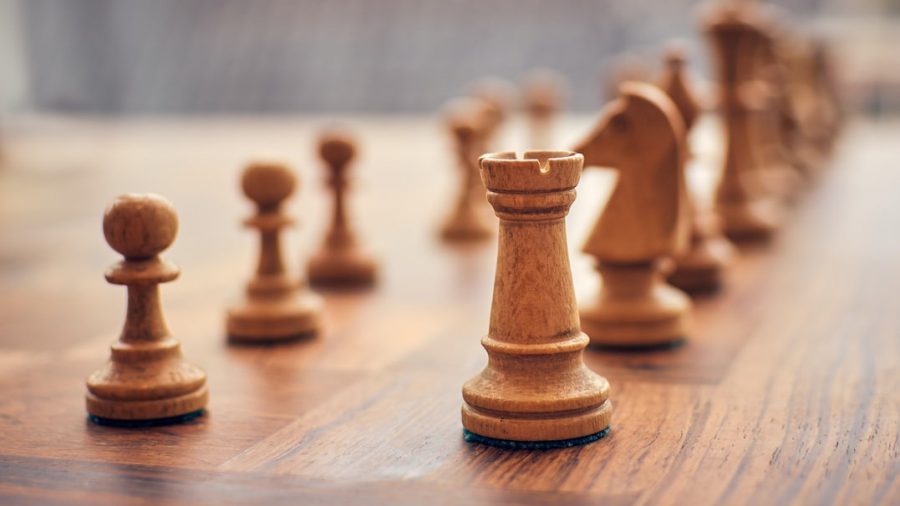 Rooks move any number of squares horizontally or vertically in any direction. They can’t move diagonally, and have to move in a single, straight line.

Bishops move any number of squares diagonally in any direction. They can’t move horizontally or vertically, and have to move in a single, straight line.

If you look at your chessboard when the pieces are set up, you’ll see you have one bishop on a white square, and the other on a black square. Since they can only move diagonally, they’ll be tied to these colours for the whole game. 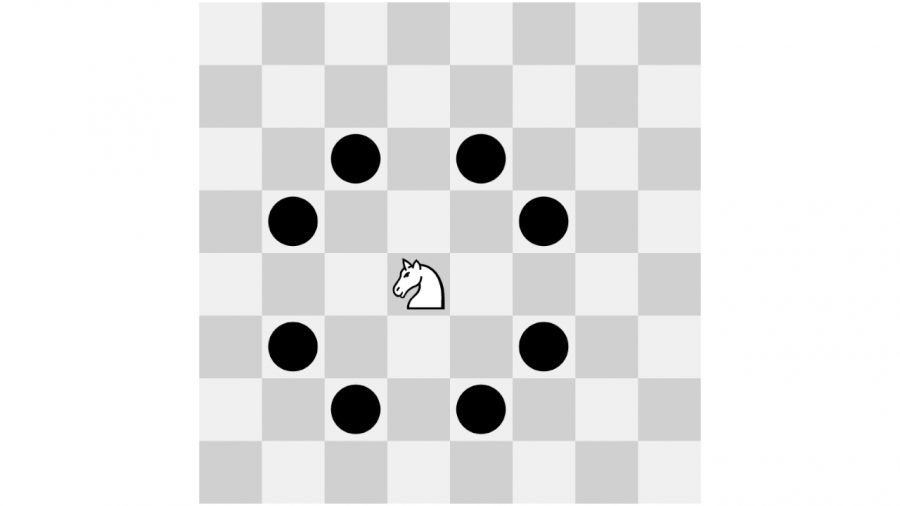 Crucially, Knights can move through other pieces, allowing them to land behind enemies. This is best thought of as the Knight jumping over its opponents.

Queens can move any number of squares diagonally, horizontally, or vertically. They’re something of a cross between Rooks and Bishops, and are the most powerful pieces in Chess.

However, Queens can only move in single straight lines. That means you can’t move a Queen diagonally across the board, then move it vertically up, and finally shift it horizontally all on the same turn. You’ll need to make each of those moves on separate turns.

Kings move a single square diagonally, horizontally, or vertically in any direction. That makes the King a pretty weak piece that’s best protected by those around it.

Remember, though, that you can’t move your King into check. 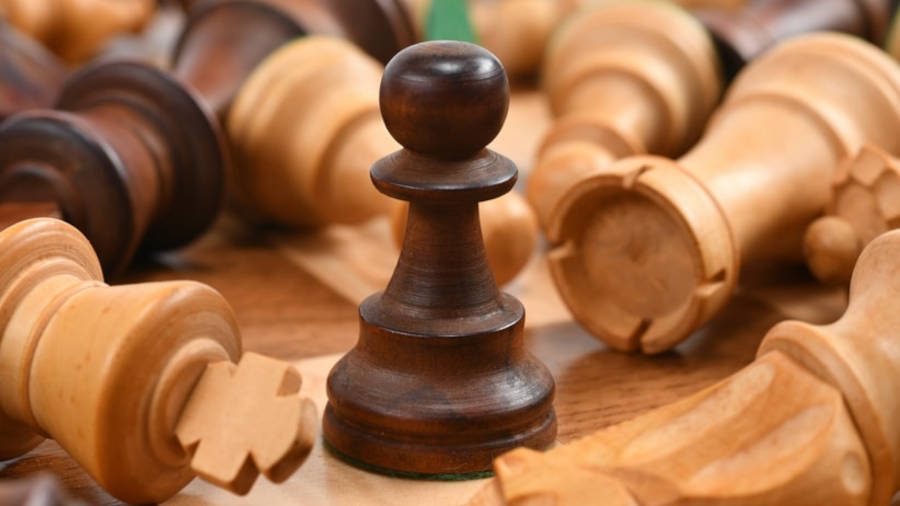 If you manage to move a pawn all the way to the opposite side of the board it will be promoted to a Queen, Rook, Bishop, or Knight. You get to pick the piece it’s converted to, although a Queen is the usual choice given the piece’s strength. Put the new piece in the square that the Pawn currently occupies, and remove the Pawn from the board.

Solitaire: These are the best solo board games

The new piece follows all the movement rules it usually would, as if it had never been a pawn. There’s no limit to the number of pawns you can promote during a game, and your choice of promotion isn’t limited by previously captured pieces, either. You could theoretically convert every pawn into a Queen, and have them all on the board at the same time. 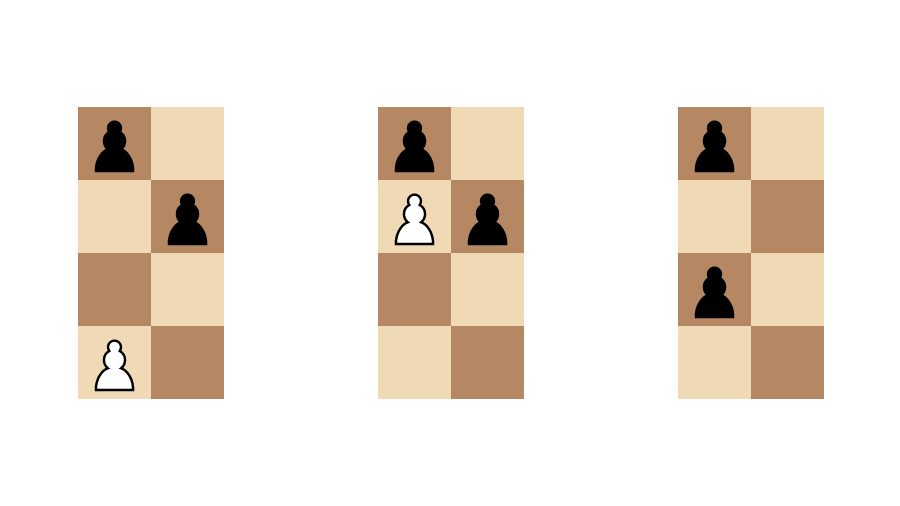 Often forgotten by beginner players, en passant is a powerful move. It comes into play when you move a pawn forward two squares from its starting position. If by moving a pawn two squares instead of one, you moved it over a square in which an opponent pawn could have captured it, your pawn can be captured by your opponent on their next turn, as if you had moved the pawn only one square. The idea is that you can’t evade capture by taking advantage of your pawns’ two-square movement boost.

Your opponent must invoke en passant on their next turn (i.e. immediately following the movement of your pawn). If they forget to, then it’s bad luck for them, and they lose the chance to capture your pawn using en passant. 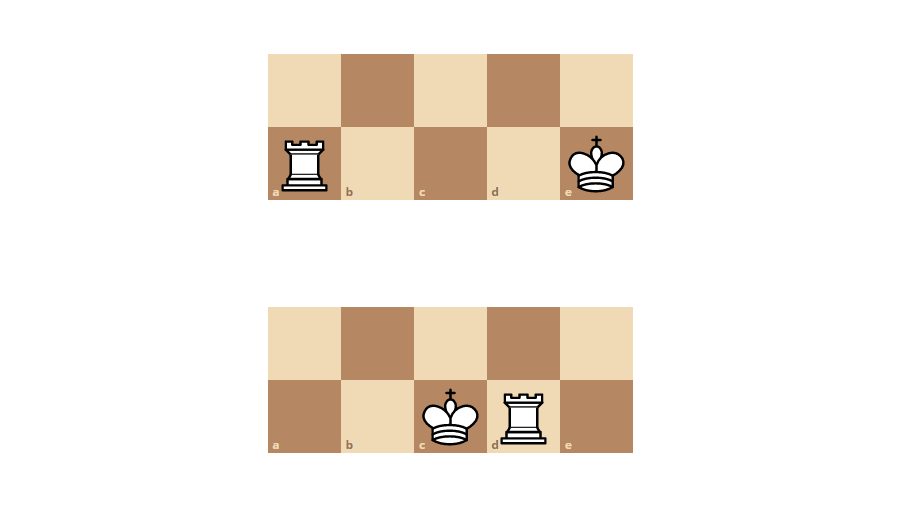 Castling involves moving your King and one of your Rooks on a single turn. To perform it, move your King two squares towards your chosen Rook, before placing the Rook in the adjacent square on the other side of the King. You’ll end up with your King and Rook bunched up next to each other towards one side of the board. Either Rook can be used in the manoeuvre.

However, castling is a very situational move that requires two conditions to be fulfilled: the Rook and King haven’t yet moved in the game, and there are no pieces between them.

Edge detection: Our pick of the best tile games

You also can’t perform castling if your King is in check, which effectively means you can’t use castling as a way of escaping check. Nor, as usual, can castling be used if it would put your King in check. 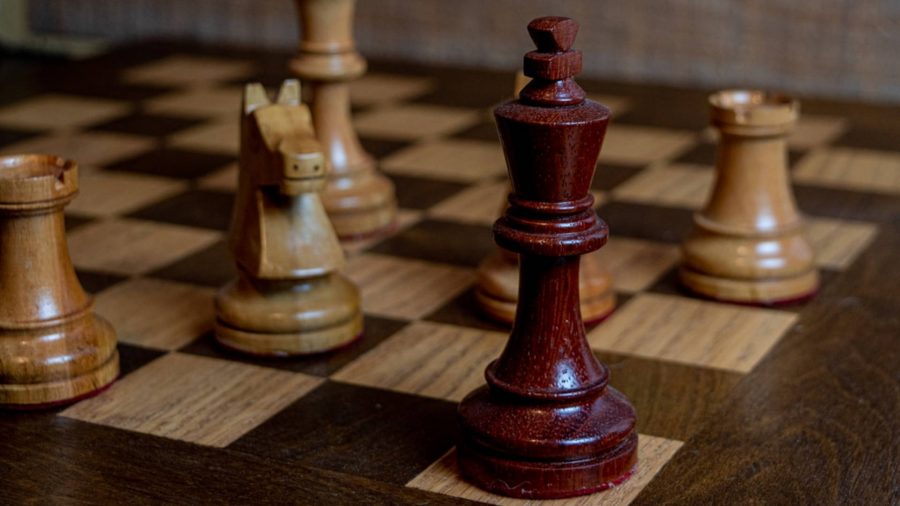 Now you know how to play Chess, but how do you win? Here are a few Chess strategies for beginners that’ll help. They’re basic pointers that are easy to follow, but should give you a leg up over your opponent. Even the most advanced grandmasters follow these strategies.

Move several pieces at the start. In the opening turns of a game of Chess, it can be tempting to focus on a single piece. Moving one piece across several turns might seem like the best way of quickly attacking your opponent. But it’s usually a recipe for disaster. While you’re galavanting across the board, your opponent has probably developed their entire frontline, taking the centre of the board, and putting you on the back foot. Make sure to move multiple pieces in the opening few turns to give yourself a sturdy foundation.

Defend your King. The King is the most important piece in Chess. You need to keep it safe at all times. That means not moving it out into the open, nor abandoning it too early by moving all of its neighbouring pieces away. As a good rule of thumb, it’s best to castle your King as soon as possible. By moving your King away from the centre of the board you nestle it into safety, while bringing your rook into a more useful position. 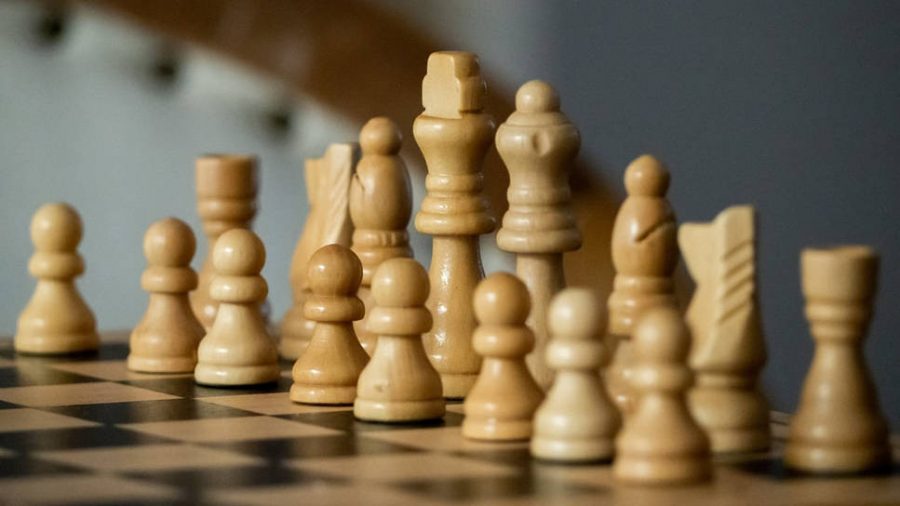 How to learn chess

When it comes to learning how to play chess, practice makes perfect. After reading through the basic rules, sit down with a pal to have a go at setting up and playing a test game. Don’t worry about the special moves for now. Instead, focus on memorising the movement methods of all six pieces, and identifying when a King is in check or checkmate. Keep these rules explanations handy, so you can easily refer back if you get stuck.

If you don’t have any pieces or a chessboard to hand, no problem. Chess works as a fantastic online board game, and there’s plenty of well-optimised internet versions that are free to play. We reckon chess.com is the best among them for letting you practise against bots, or challenge your friends.

Although chess has something of a reputation for being cognitively exacting, it’s best played in whichever way you feel most comfortable. That might mean quickly dashing through a game, and moving pieces with little strategic thought to ingrain their rules in your head. Play in whatever way you find fun, rewarding, and entertaining.