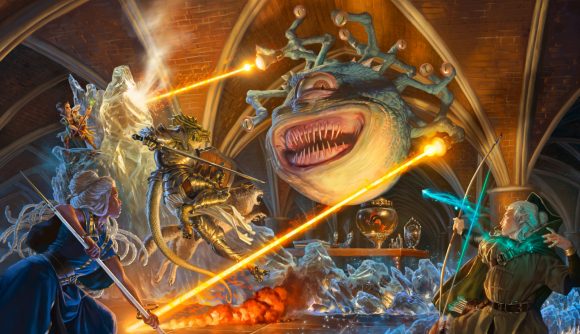 Spoiler season for Adventures in the Forgotten Realms – Magic: The Gathering’s upcoming Dungeons and Dragons crossover set – is now fully underway, with publisher Wizards of the Coast revealing more cards over the next few weeks. It was kicked off yesterday with previews of several cards that ape the roleplaying encounters of D&D, and are styled as scenarios that players might face on their adventures.

Rather than presenting a specific creature, spell, or object, these Forgotten Realms cards picture an encounter, with their abilities written as responses to the obstacle that face’s you. They all riff on typical D&D scenarios, such as finding a villain’s lair or choosing your weapon, and each card ability is accompanied by short flavour text that mimics a roleplaying choice. Many of them identify a particular skill or feat recognisable in D&D 5E, too.

You Come to a River, for example, gives you the choice to ‘Fight the Current’ or ‘Find a Crossing’. Choosing the first returns a non-Land permanent to its owner’s hand, while the latter grants +1/+0 to a Creature until the end of the turn.

Similarly, You See a Guard Approach gives you the opportunity to ‘Distract the Guard’, which Taps a target Creature, or ‘Hide’ which grants Hexproox to a target creature. 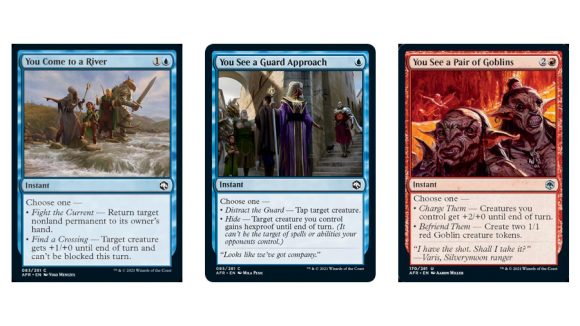 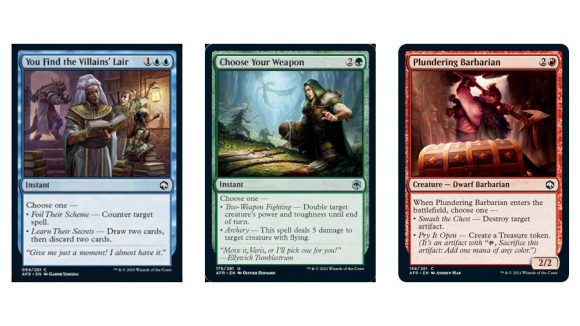 The abilities of standard Creature cards in Adventures in the Forgotten Realms cards also include flavour descriptions, and are presented as roleplaying choices for the player to make. When Plundering Barbarian enters the battlefield, you can choose to ‘Smash the Chest’ to destroy an Artifact, or ‘Pry it Open’ to create a Treasure token.

Functionally, these cards are identical to standard MTG card-types. They differ in their styling, and build a roleplying element into their descriptions, but are used in-game like any other card.

However, they’re another demonstration of how Wizards is melding the roleplaying of D&D with the card play of MTG, building upon the dungeon-crawling mechanic that was revealed last week.

Check out our guide to stay up to date with the latest Adventures in the Forgotten Realms spoilers, and did you know that Forgotten realms Commander decks had been revealed?