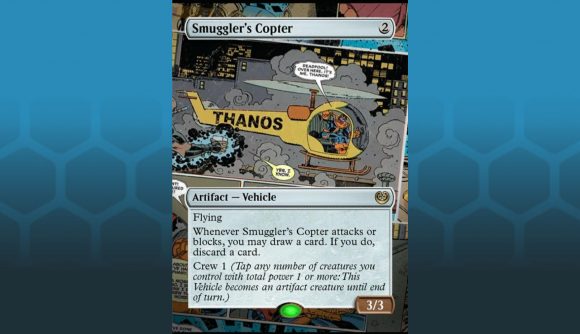 The wonderful thing about Magic: The Gathering alters is how they can make worlds collide, popping Robert Pattison’s visage from The Batman onto a Magic card, for instance, or immortalising the Will Smith Oscars slap through the TCG. Now one enterprising alter artist has brought Marvel Comics to Magic: The Gathering, sticking Marvel’s meme-worthy Thanos Copter on an MTG card.

Reddit user FunwithScoop shared their Thanos Copter alter on the magicTCG subreddit on Tuesday. They’ve combined classic comic book artwork with a real Magic card to depict the Thanos Copter, which is “truly the most powerful character in the Marvel Universe”, by their reckoning.

The card FunwithScoop has chosen for this alter is the similarly named Smuggler’s Copter, a flying 3/3 colourless vehicle from 2016’s Kaladesh set. It’s a fitting card, as of course Thanos is the MCU’s most dexterous smuggler. Remember how that loveable, purple rogue smuggled those infinity stones all around the galaxy on that enormous spaceship of his, and then smuggled half of all life in the universe out of existence?

If your main exposure to Marvel is the MCU, and you don’t keep up with Marvel memes, you may not have heard of the Thanos Copter. In the Marvel movies, Thanos tends to drive fairly mighty vehicles, and tends to take himself pretty seriously. So Marvel fans found it pretty funny dredging up a less impressive appearance of the character in an old 1979 comic book – driving the Thanos Copter.

A Smuggler’s Copter proxy im particularly proud of! from magicTCG

Yep, in case you hadn’t heard it already, in Spidey Super Stories #39, the Mad Titan Thanos attempts to steal the Tesseract, using a bright yellow helicopter with his name emblazoned on the side in big, bold letters. Not one of his finest moments, that.

It’s been a meme among Marvel fans for years now, but the Thanos Copter also got an official nod in the 2021 Loki series, where it appeared in a brief Easter Egg in episode 5.

If you’re in the mood for surprising Magic cards, featuring art styles that range from classic monster movie posters to chibi, you should check out our guide to the best MTG Secret Lairs. And since we’re in the run up to the next set’s release date, here’s all you need to know about Streets of New Capenna.