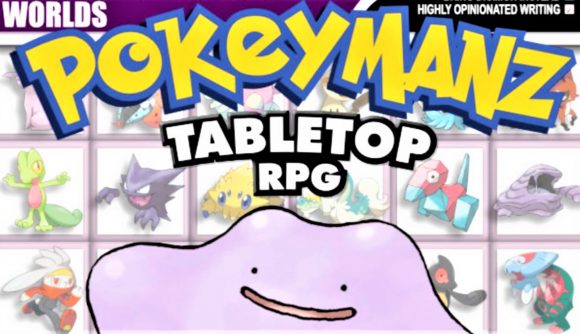 November 16, 2021 –  This article was updated to include interview comments provided to Wargamer by the game’s creator, Chronicdelusionist.

An intrepid Reddit user has released their own free, 96-page long, fan-made Pokémon tabletop RPG rulebook, featuring a suite of rules for creating custom trainers, training, and battling Pokémon to become the very best –  all of it styled as an adoring homage to classic early-2000s Pokémon videogame and Pokémon TCG manuals.

The game – a free, unofficial fan project that’s unaffiliated with The Pokémon Company or Pokémon videogame developer GameFreak – is memefully titled ‘Pokeymanz’. It was shared openly in Reddit’s r/rpg community on Sunday by its creator Chronicdelusionist, who describes it as “a flexible Pokémon TTRPG modelled after the anime and manga”. It’s based on core rules adapted from Pinnacle Entertainment’s Savage Worlds RPG system, says Chronicdelusionist in the Reddit thread – but with numerous homebrew elements added to mould it to the Pokémon universe.

Everything you’d expect from a Pokémon RPG is here – character creation for your trainer, including Pokémon-flavoured versions of Savage Worlds’ ‘Edge‘ and ‘Hindrance‘ character traits; the ability to capture, train, and battle Pokémon; encounters with wild Pokémon, including tough ‘boss’ monsters; Pokémon moves and evolutions; gym battles, and so on. But the Pokeymanz PDF also includes a couple of wild cards to go with its anime theming.

Most notably, there are two entire pages of rules for how players can interact with a Pokémon battle, even if they’re not one of the trainers involved, but sitting watching from the sidelines. 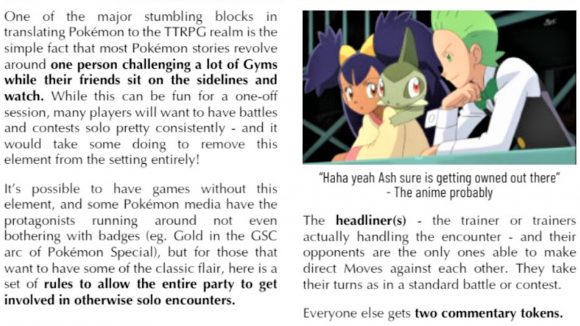 Every player who’s not the ‘headliner’ (i.e. currently in battle) gets two Commentary Tokens, which they can cash in to roleplay some of the spectator banter (as seen in the anime TV show between sidekicks Brock and Misty, while protagonist Ash battles enemies).

They then watch their commentary wreak real effects on the battle itself – as artful comments can, among other options, negate hits against Pokémon, grant your battling ally a reroll, or create a hazard on the field. 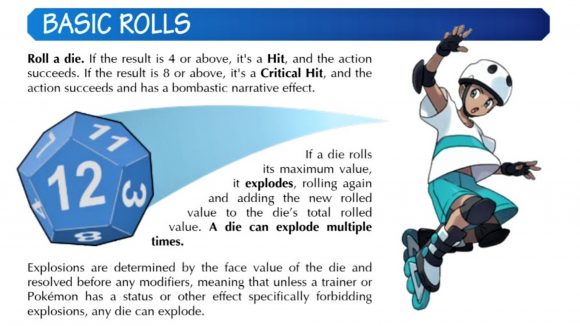 For the more initiated, there are also optional extra rules for simulating the videogames’ chance-based system for catching (or failing to catch) wild Pokémon; earning Pokédollars; shopping for items; incubating and hatching Pokémon eggs; and building your own secret bases.

The creator (who’s now hard at work on a system that “aims to recreate the feeling of Mega Man”) tells Wargamer they made Pokeymanz because, while there were other homebrew Pokémon TTRPGs out there, all were too focused on hard simulation and competitive rules detail.

“I was very tired of the only substantial systems available for Pokémon being really crunchy and seemingly always feeling the need to make new stat blocks for each and every new Pokémon,” they explain. 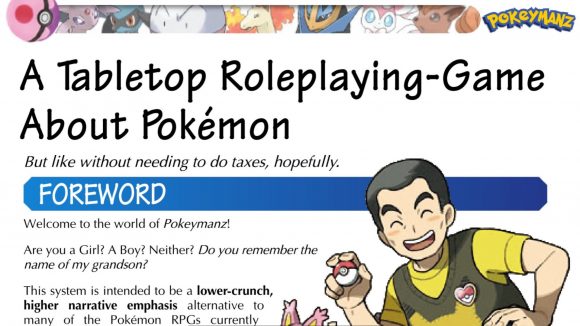 “It’s a work of pure love for the Pokémon I grew up with,” they add.

“As a side note, as a disabled person, it was nice to get a chance to make a game that talks about disability explicitly, and acknowledges that it can be a hard line to walk to portray disabled characters compassionately while including disability as an outright mechanic.”

Pokeymanz seems to us like a solid collection of flexible, rules-light options to play with – you can learn more on the aforementioned Reddit thread. 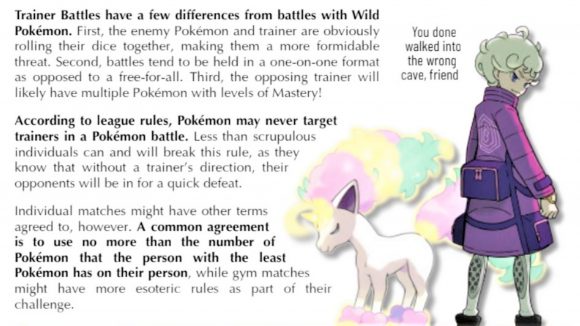 It’s far from the only praiseworthy Pokémon-themed homebrew tabletop game we’ve come across, however. We’ve previously reported on a Pokémon version of Carcassonne, as well as a self-styled ‘Ultimate Pokémon board game‘ that takes 23 hours to play.

And then there’s the big dog: if you want to learn more about the Pokémon Trading Card Game, you could check out our guide on how to play Pokémon cards guide, learn how to build a Pokémon deck, or else take a stroll through the rarest Pokémon cards.