Announced only last week, we’ve already had a good look at Victoria 3. We know its developers are keen to cater to new players, warfare will take the backseat, and alt-history will be baked into its design. A dev diary posted yesterday explores how the series’ famous Pop system will be implemented in the game to simulate your nation’s changing demographics, and visually model its moustachioed glory.

Pops function as the atoms of Victoria 3’s simulation, modelling the various demographic disparities between the people who make up your nation. Each is categorised by a profession (including Capitalists, Bureaucrats, Officers, Shopkeepers, Machinists, Laborers, and Peasants), which determines their level of wealth, cultural group, chosen religion, and education.

Unlike its predecessor, however, each Pop in Victoria 3 won’t merely be a statistical label, but represented by a 3D character model, similar in style to those in Crusader Kings 3. Early footage screenshots included in the dev diary, as well as a press demonstration of Victoria 3 that was shown to Wargamer prior to the game’s announcement, shows each Pop’s panel housing its 3D model, alongside a raft of metrics and stats.

The dev diary says Pop will be visually modelled “so you can see which demographic sports the best moustache”. Out of the two Pop models shown so far, both have moustaches, which a 100% model-moustache rate. If that trend continues, Victoria 3 will have us drowning in facial hair. 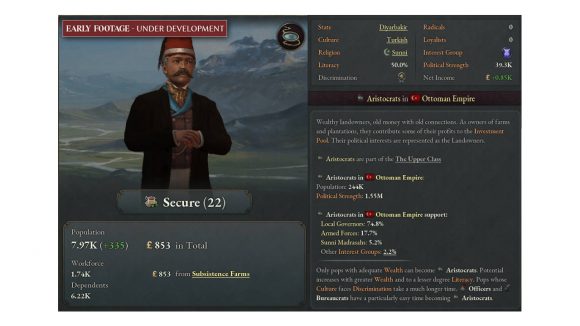 Elsewhere in the dev diary, and as game director Martin Anward and designer Mikael Andersson explained to Wargamer, Pops aren’t static, but will move industries, change political allegiance, or migrate in response to the decisions you make. In a two-way feedback loop, your actions affect the Pops, and the Pops’ reaction will change the make-up of your nation.

One of the dev diary screenshots suggests how this might work in-game. A panel for Aristocrats in the Ottoman Empire showed that Pops will need a sufficient amount of Wealth before they can move up to the Aristocracy, and those whose culture is discriminated against within their country will take longer to move class position. Laws enacted by you might help, or hinder this social mobility.

“Everything that you do should in some way reflect back on the Pops, and then the Pops change who they are as a result”, Andersson told us, regarding Victoria 3’s Pop system. 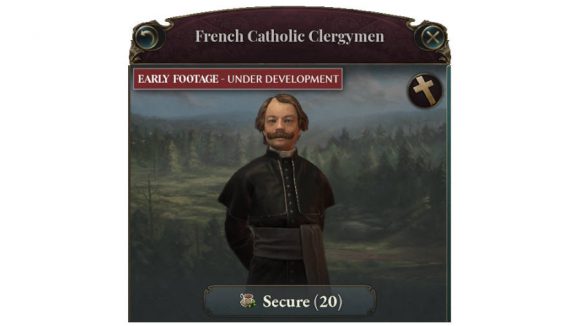 “You might build another level of textile mill, and that creates some more jobs for machinists, labourers, engineers, and capitalists,” he added. “There are some other POPs working as peasants, or as machinists in another factory, and they decide they’re going to come and take these jobs in the textile mill.”

“As a result of their job and wealth changing, they will get different political ideas, which will reflect back on the interest groups: what they demand of you, how they react, and what power level they have.”

You’ll have to satiate the desires of your Pops, mediating between their competing interests, and trying not to inadvertently distress one group while appeasing another. 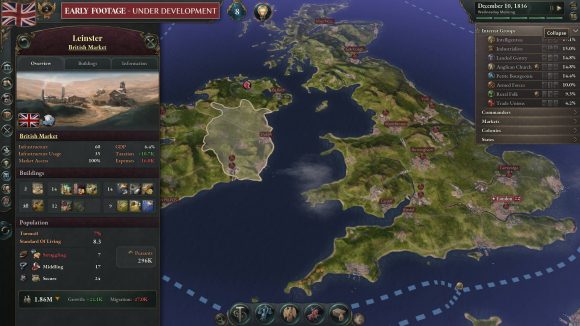 Elsewhere in our interview, Anward explained that Victoria 3’s Pops system will replicate that of Victoria 2, but draw from more metrics to provide a more accurate demographic model.

“But while Victoria only simulated the Workforce, we simulate the entire world’s population through Dependents,” he added. 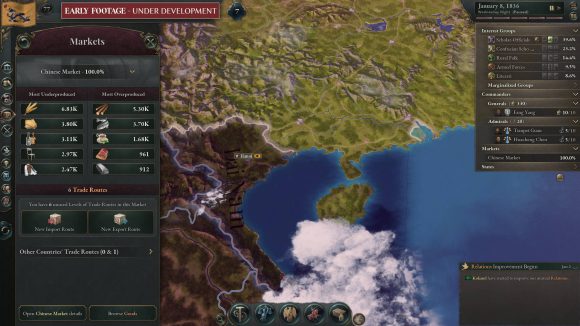 “That is essentially the slice of the population like children, the elderly, non-working women, or women that work in small-scale home industries, and other things.”

“POPs can be loyalists or radicals, which influences the political system. They are part of interest groups. So it’s the Victoria POP system, but we’ve kind of doubled down on it.”

Hungry for more grand strategy? Read our guide to the best Crusader Kings 3 mods, or our rundown of Hearts of Iron 4’s DLC.