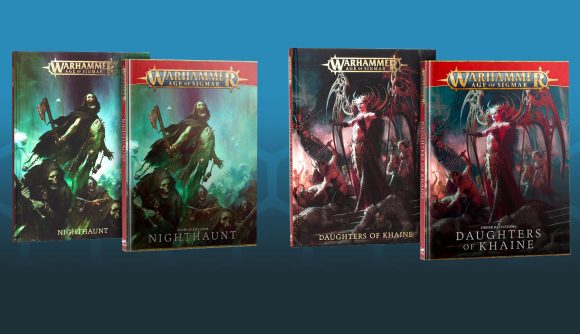 Run for the hills! The spectral Nighthaunt and murderous Daughters of Khaine are coming this Saturday, as their new 3rd edition Age of Sigmar battletomes go up for pre-order on May 14. As you might expect, each battletome contains new rules and new lore, as well as warscrolls, and Path to Glory rules to facilitate campaign play.

Both the Daughters of Khaine and Nighthaunt battletomes will have optional collectors editions, featuring soft covers with gold foil blocking, gilt page edges, and a red ribbon – luxurious. As usual with a new battletome or codex release, Games Workshop is selling packs of cheat-sheet warscroll cards, for easy rules referencing, and custom dice for… easy rolling. However, according to the pre-order announcement made by Warhammer Community on Sunday, the Daughters of Khaine warscrolls have been delayed, and will not be available alongside their battletome. We’re surprised, witch aelves are usually so punctual!

Along with the battletomes, a haunted houseful of Nighthaunt can be purchased from Saturday. There’s the new ferryman hero, Awlrach the Drowner, for starters, paddling along on half a boat. There’s also a collection of three spooky lads – a Knight of Shrouds, a Spirit Torment, and a Guardian of Souls – who apparently form the ‘Ethereal Court’. Finally, there’s the Craventhrone guard crossbows from March’s Arena of Shades battlebox, now sold separately. The rest of the Nighthaunt and Daughters of Khaine models from that box seem to be mysteriously absent, however.

This is the second set of Age of Sigmar battletomes GW has released in 2022, after the Fyreslayers and Idoneth Deepkin books came in February. During Warhammer Fest last week, the battletome roadmap was extended, revealing that Skaven and Sylvaneth are next on the slate. (There were plenty of tasty model reveals too.) It also seems Chaos is getting a bolstering with Battletome: Slaves to Darkness coming out this Winter. 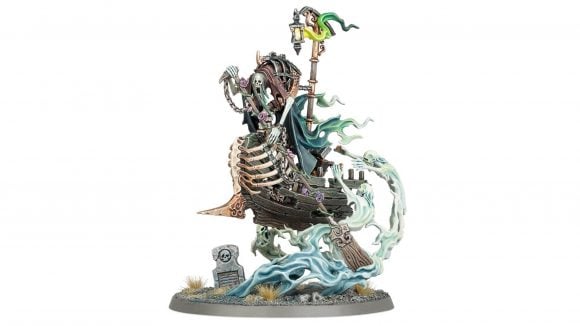 Nighthaunt and Daughters of Khaine aren’t the only Age of Sigmar factions featured in pre-orders this weekend. There’ll also be new Vanguard starter army boxes for the Idoneth Deepkin and Fyreslayers available, not to mention a wood elf pitch (and sheep-riding star player) for Bloodbowl and a multitude of Middle Earth models. A pretty big week, all in all.

If you’re still unsure which Age of Sigmar faction gets your vote, or want to branch out and start a new army, check out our Age of Sigmar armies guide. If you’d prefer a visit to The Old World, check out the best Warhammer Fantasy games.