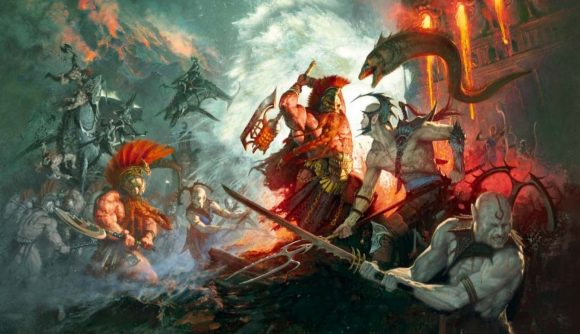 Fire and water collide this weekend, as new battletomes for Warhammer Age of Sigmar’s Fyreslayers and Idoneth Deepkin factions go up for pre-order together, presumably throwing up great clouds of steam in the process. The new 3rd edition battletomes will contain new lore, artwork, and rules for the fiery dwarves and deep-sea elves. As announced via a Warhammer Community article on Sunday, they will be available to pre-order from the Games Workshop webstore this weekend, alongside new warscroll reference cards and custom dice.

These will be Warhammer Age of Sigmar’s first battletomes of 2022, following on from the 3rd edition books for Maggotkin of Nurgle, Orruk Warclans, and Stormcast Eternals published late last year. Both will update the rules for their respective factions, with the Idoneth Deepkin receiving Path to Glory rules centred on soul raids and new enclave allegiance abilities – such as the Nautilar’s tougher turtles, and Fuethán’s bloodthirsty allopexes.

The Fyreslayers, meanwhile, will get Path to Glory rules of their own, based around mercenary contracts and filling up their vaults with gleaming gold. The announcement promises “a whole host of changes and improvements”. Those previewed by Warhammer Community so far include upgraded ur-gold runes, and burnier Magmadroth mounts.

There’s little in the way of new models to go alongside the battletomes, in contrast with last weekend’s Warhammer 40k Eldar pre-orders. However, the Auric Runefather on Magmadroth model, previously only found in the Start Collecting: Fyreslayers box, will now be sold separately – ideal if you fancy a whole army of dwarves atop salamanders, without any units scrambling around on foot behind them. 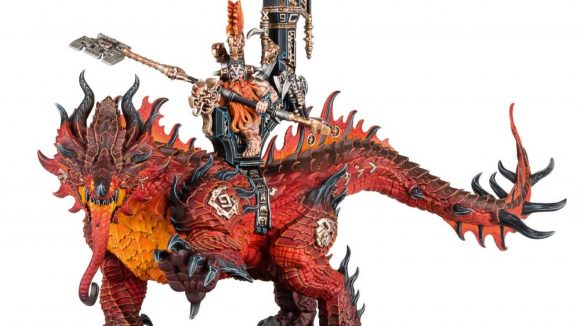 As well as the regular versions, both the Fyreslayers and Idoneth Deepkin battletomes will have limited editions, featuring soft-touch covers with gold foil blocking, gold gilt page edges, and a red ribbon to mark your place. The custom faction dice come in blue or orange (no prizes for guessing which one’s Deepkin and which one’s Fyreslayers) with a suitable symbol from the respective faction replacing the six.

As revealed in GW’s battletome roadmap in early February, the next two Age of Sigmar factions to receive books after the Idoneth Deepkin and Fyreslayers unbox their battletomes will be The Daughters of Khaine and Nighthaunt.

If you’re still unsure which Age of Sigmar faction to pledge allegiance to or are looking to start collecting a second army, check out our Age of Sigmar armies guide. Or, if pouring hours into Total War: Warhammer 3 has you longing for the factions of the past, here’s everything we know about Warhammer: The Old World.