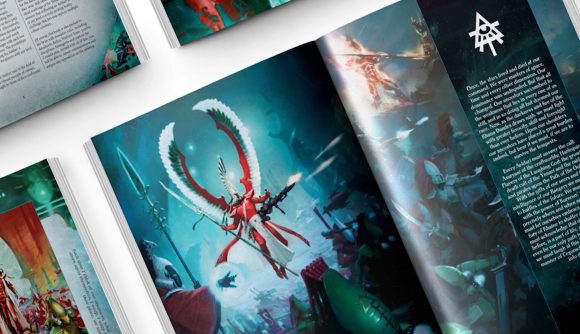 Practise your haughtiest expression and get ready to ride the Webway, for Warhammer 40K’s new 9th edition Aeldari codex will finally be available to pre-order from Games Workshop, alongside a load of new Eldar models, this weekend. Announced in a Warhammer Community article on Sunday, pre-orders for the new Eldar content will go live on Saturday, February 26.

Squeezing artwork, lore, and rules for Craftworlds, Harlequins, and Ynnari into its 200 pages, (just eight fewer than in the hefty Space Marines codex), the new Eldar codex looks set to restore this venerable, but rather overlooked, Warhammer 40K faction to the status it once held. Its new rules include the game-changing Webway Strike and significant upgrades for Aspect Warriors, including a major melee boost for the recently unsung Howling Banshees.

As for new models, most of the Eldar figures revealed in teasers over the past few weeks will be part of Saturday’s pre-orders. That includes the redesigned Maugan Ra and his skull-faced Dark Reapers, the fresh Guardian infantry, and the ultra-customisable new Warlock model. The new, great big Avatar of Khaine model was notably absent from the announcement, which presumably means it won’t be among the models you can buy this weekend.

Rounding out the Eldar model news: Yvraine, The Visarch, and The Yncarne, the three death cult characters previously packaged together as the Triumvirate Of Ynnead, will now be available to buy separately. If, in the past, one caught your eye but the others left you cold, you’re in luck. 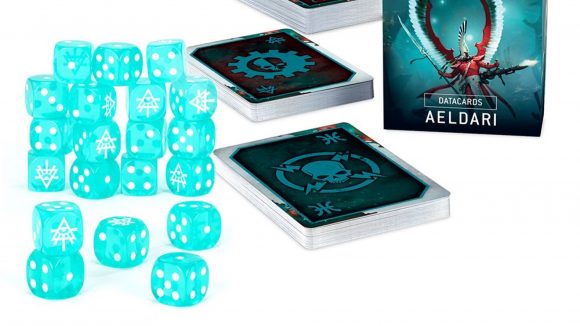 Naturally, a new codex launch means new dice and datacards, and both of these will be available on February 26 too. The new Eldar datacard set seems huge (must be all those psychic powers) with a whopping 93 cards for easy rules referencing. Easier anyway. If you prioritise staying on theme at the tabletop, there’ll also be cyan, ‘gem-effect’ dice, with Eldar runes on the sixes.

If you want to brush up on your space-elf etiquette before the release, check out our Eldar faction guide. But if you prefer your Warhammer 40K army to consume worlds instead of crafting them, then stay tuned, as the Tyranids will be the next codex Games Workshop releases, so it won’t be long before new models and rules start to make themselves known. Here’s our Tyranids guide, to keep your hunger at bay till then.