In the Mortal Realms, the Soulblight Gravelords are all the rage. The latest army coming to Age of Sigmar, the vampiric force hits pre-order this weekend, and is designed to replace the Legions of Nagash as the Alliance of Death’s standout force. While the Soulblights are packing some seriously impressive hero models, their much-anticipated Blood Knight cavalry might be the real stars of the show.

A Warhammer Community post yesterday revealed the on-the-table rules and warscroll for the heavy cavalry. Each unit can include up to 15 Blood Knights, each boasting a hefty three Wounds and ten Bravery – so they’re unlikely to be falling down too often. One model of each unit must be built as a Kastellan (or Champion), boosting that models Attacks value by one. And for every five models in a Blood Knights unit, one can be built as a Standard Bearer, letting you re-roll dice rolls for that unit’s Deathless Minions battle trait.

More peculiarly, although each of the undead cavalry comes armed with a Templar Lance or Blade, Blood Knights can also use the hooves and teeth of their ‘Nightmare’ mounts to attack, increasing their To Hit and To Wound rolls by one, and using no Rend modifier.

It also looks like the chosen vampiric dynasty of your Soulblight army will influence the abilities of your Blood Knights, with the warmongering Kastelai Dynasty making the most of the heavy cavalry. Able to take Blood Knights as battleline units, they can put them in reserve during set up. After each movement phase, you can bring in one of these reserved units anywhere within 6” of the battlefield’s edge, and no less than 9” from enemy units – plunging them directly into the fray at the most inopportune time for your opponent.

Even better, when Kastelai vampires destroy enemy units, they gain particular buffs. Kill a Hero or Monster, and they’ll gain plus one to damage; destroy a unit with Wounds of three, and they’ll increase their maximum Wound count by one; or kill a weaker unit, and you can add two to your Blood Knights’ run and charge rolls. 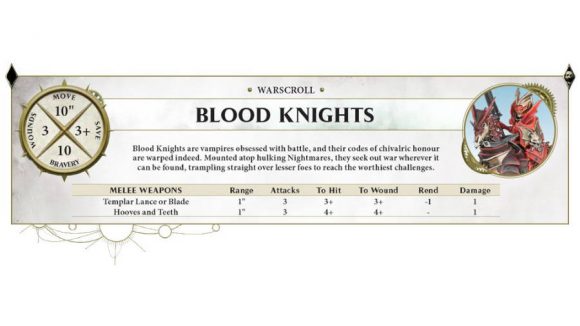 A few other traits were also revealed, including their Riders of Ruin ability, which lets them pass through weaker units to attack those beyond (much like flying units do) while trampling them underfoot for extra damage. Their Martial Fury trait boosts their Damage by one after charging, and The Hunger lets them heal up to d3 wounds if they killed any enemy units that round.

Beefy, and packing a punch, their scalloped plate armour is looking pretty enticing, too.

Did you know that Age of Sigmar third edition was announced, and will introduce new Stormcast Eternals and another starter box?