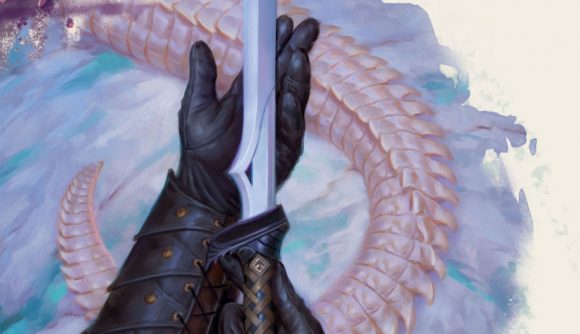 With the release of Fizban’s Treasury of Dragons only a couple of weeks away, Wargamer has just the thing to get you in an appropriately draconic mood. The next D&D sourcebook is pitched as the definitive guide to all things dragons, and will add a bumper crop of lore, monsters, spells, and items to the tabletop RPG. Ahead of the book’s release on October 26, Wargamer spoke to lead designer James Wyatt for an exclusive preview of a couple of the book’s new magic items.

Both classed as Wondrous Items of varying Rarity, they’re appropriately themed to the scaly serpents. Dragon Vessel can take the form of any container meant for holding liquid, and lets you fill it with several useful buffs by simply speaking a command word. Grab a Slumbering Dragon Vessel (uncommon rarity) to fill it with a potion of healing, potion of climbing, ale or olive oil. A legendary Ascendant Dragon Vessel, however, can be topped up with a superior potion of healing or the mysterious “potion of dragon’s majesty”.

The Scaled Ornament, meanwhile, is fashioned from a dragon’s scale and can take the form of any wearable accessory. At uncommon rarity, it grants advantage on saving throws against being charmed or frightened. But if you grab a legendary version, you’ll be able to grow a pair of spectral dragon wings that let you fly at a speed equal to your walking pace.

Check out the full descriptions for both items below, alongside another exclusive artwork.

Speaking to Wargamer, Wyatt says the book’s magic items have been designed to tie directly with its dragon theme. “As a starting point, we’ve got legendary items linked to Bahamut and Tiamat, and a couple of dragon-themed weapons (including the famous Dragonlance)”, he says. “Then each type of Gem Dragon also has an associated magic item.” 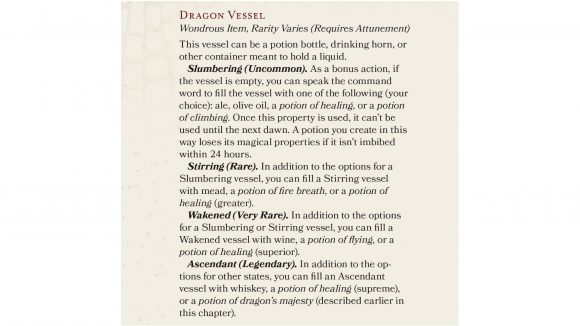 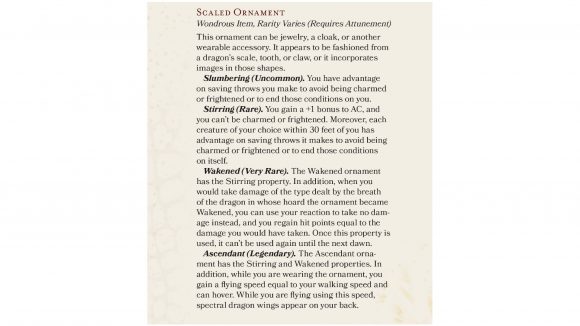 The book also introduces new ‘hoard items’: magic items that can be upgraded by steeping them in the hoard of a more powerful dragon. Wyatt gives the example of taking an item from a small Wyrmling, before submerging it in the hoard of a Young Dragon to upgrade its rarity and power, unlocking new abilities.

“The neat extra quirk is that these items also take on some unique characteristics depending on the kind of dragon the hoard belongs to,” Wyatt says. “So if you get a Dragon’s Wrath weapon from a Blue Dragon’s hoard, it’ll deal some extra lightning damage. If you later steep it in a more powerful Red Dragon’s hoard, it gets fiery properties instead!” 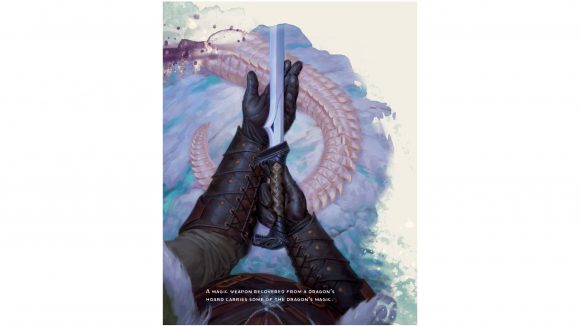 Wyatt says his favourite item of the book is the Gold Canary Figure of Wondrous Power. Inspired by stories of the dragon god Bahamut walking the Material Plane in human form, accompanied by Gold Dragons disguised as canaries, it grants you a personal canary bodyguard. “When you activate the item, you can fly away on the back of a giant canary,” Wyatt says, “or, in truly dire straits, you can call up a gold dragon to pull you out of the fire!”

Fizban’s Treasury of Dragons will release on October 26.

While you wait, why not read our pick of the best D&D 5E Spells, or the best D&D Character Sheets you should be using. And if you’re totally new to the realm of adventuring, check our guide to all the D&D 5E Races.