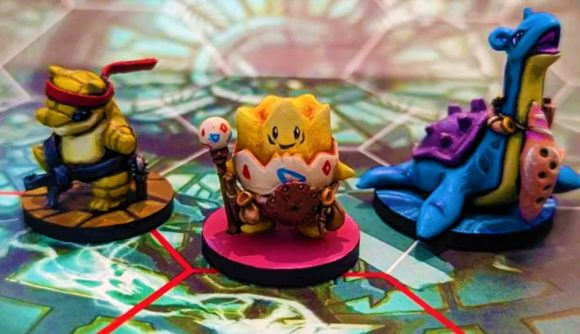 D&D and Pokémon are both certified giants in the tabletop world, so it seems inevitable that their fandoms would see some overlap. Over on TikTok, one fan of tabletop RPGs seems to have hit the sweet spot in this gaming Venn diagram. 31-year-old electrical engineer Joseph Speak is creating an army of DnD miniatures, and they’re all Pokémon with their own classes and races .

“Pokémon and Dungeons and Dragons have always been two of my greatest loves”, Speak tells Wargamer. “Both were a big part of my childhood all the way up to now.” He adds that his journey began with digital drawings – “but eventually I started to make them into miniatures and just didn’t stop”.

Speak says he has around 20 years of experience painting miniatures, and he began amassing his D&D / Pokémon army in April 2022. He began by styling existing miniatures to resemble some of the most famous first-generation Pokémon. Now, armed with a 3D printer, bootleg Pokémon toys, and several hundred Pokémon to choose from, Speak’s TikTok following has swelled.

You can check out his creations from TikTok below.

@dungeonsxdragonites here’s the promised collection of all of those dungeons and dragonites miniatures! I don’t talk too much on here so just enjoy the spinny minis! #togepi #dnd5e #miniaturetiktok #miniaturepainting #pokemongo #dndtiktok #pokemon ♬ Powerful cinematic orchestra [war] – Sino

While Speak has made dozens of different DnD Pokémon now, he says his favourite model is the spellcasting Togepi. “He’s the one that really blew up on TikTok and drew a lot of people to my profile, and he’s also really cute!” According to the Togepi TikTok from June 9 (which is nearing 250,000 views), Speak was so excited about the mini that he finished it in under 24 hours.

@dungeonsxdragonites had to lost this one early because I was so excited about it. this was only supposed to be posted tomorrow but here’s a lil togepi wizard #pokemontiktok #generationtwo #pokemongo #pokemon #miniaturepainting #miniaturetiktok #dndtiktok #dnd5e #togepi ♬ Pokémon RBGY – Remix – Toni Leys

“I’m also a huge fan of the Raichu I made just recently too”, Speak tells Wargamer. Posted on June 26, the Raichu dips its toes into multiclassing by becoming a Rogue / Ranger. A later video also reveals Raichu’s Harengon race, stats, and chosen feats.

Speak hints in many of his videos that he’s designing a Pokémon DnD adventure (called Dungeons and Dragonites, like the TikTok channel), and many of his miniatures come with rules and stat blocks ready for play. Speak tells Wargamer the rules for various minis will “probably be up for free somewhere sometime next month”.

We already know his MewTwo mini could appear as a Mind Flayer – and the Big Bad Evil is reportedly planned to be an Aboleth mutation of Mega Gyarados.

According to Speak, next up on the mini roster are a Riolu Monk and a Wobbufet Wizard. “I’m also working on the Legendary Dogs as some high-level NPCs / enemies”, he adds.

Speak also paints and posts about Warhammer when he’s not painting Pokémon (someone should definitely put him in touch with the Warhammer Squig Pokémon painter).

When asked about the response to his work online, Speak described it as “insane”. “Honestly the response has been overwhelming, and I’m really happy that people are enjoying what I do!”

For more Pokémon, check out our guide to how to build a Pokémon deck in the trading card game. Or, if you’re more on the D&D side of things, why not take a look at our DnD maps guide?