What are the best Magic: the Gathering cards of 2021? More and more Magic cards are printed every year, and in 2021, with fresh Commander decks for each Standard set, the Modern Horizons sequel, the new digital-only Alchemy cards, and so much more, we’re now firmly at a point where keeping up with everything is downright daunting.

In fact, experts believe we may be approaching an event horizon where more Magic cards are printed than there is money in the world to buy them, at which point we’ll see economies crumble, governments topple, and trading cards become the only accepted currency across the globe (keep your rare MTG cards close; you might have to trade them for non-irradiated water one day).

Until that happens, though, you’ll still mainly be wanting to use your cards for winning games of Magic: the Gathering, so you’ll need to know the best ones that came out in 2021. It’s been another strange year of mainly online MTG play, but at least plenty of exciting cards were released.

Here we’ve filtered out the pack fillers, the bulk rares, the unexceptional, and the stinkers, to deliver a list of the most powerful, game-changing cards of the last 12 months.

These are the best Magic: The Gathering cards of 2021: 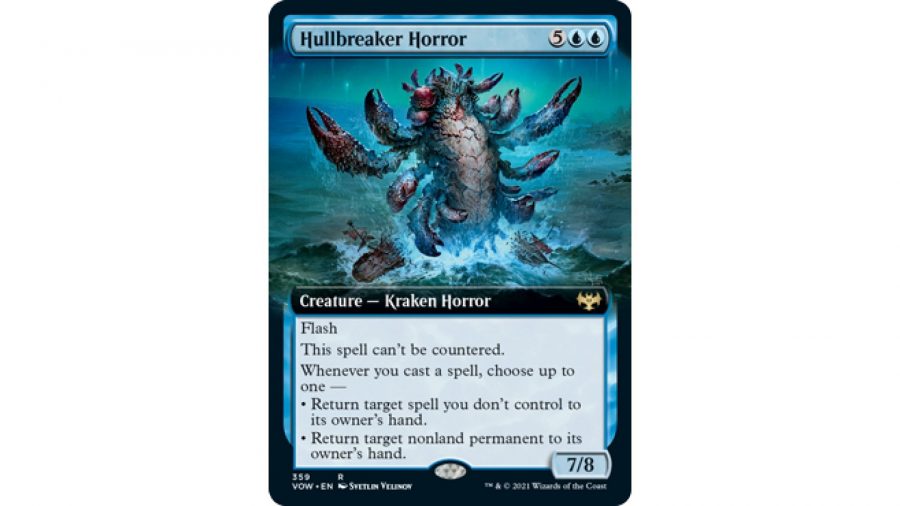 Any creature card that costs seven mana has to make a splash, and this beastly behemoth sure earns its keep. For starters it’s huge and has flash, so you can plop it down as your opponent’s creatures are attacking and let it swallow one of them up.

But more importantly, if your opponent allows you to untap with a Hullbreaker Horror, it’ll soon sink their spirit as well as their ships. When every card you play bounces their creatures and spells back to their hand, the game is as good as won. 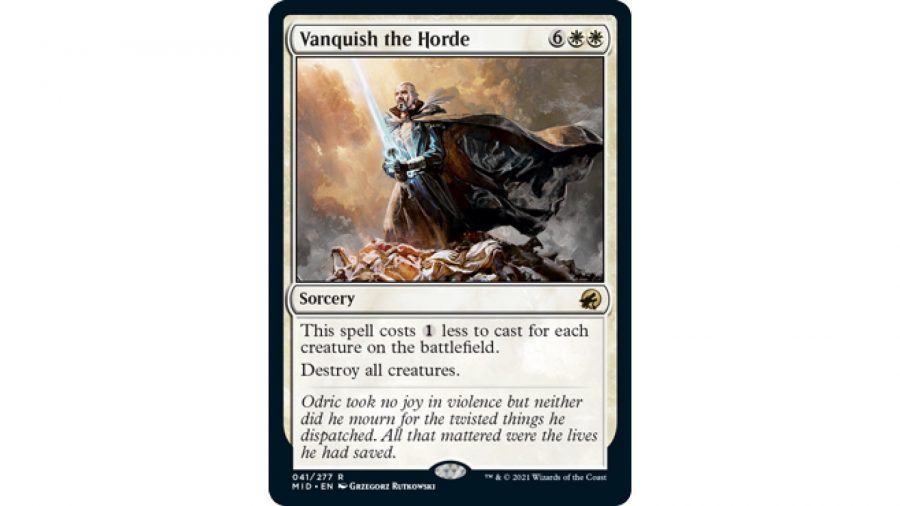 A ‘destroy all creatures’ spell that gets cheaper the more targets are out on the field, this powerful board wipe hasn’t quite found a home in the Standard format, where the current top white decks are full of low-cost creatures, but that doesn’t mean it’s not extremely potent.

Digital decks: Our guide to the essential MTG Arena codes

Where the card has really shone is Commander. The abundance of creatures in Commander games means that Vanquish the Horde will often cost a paltry two-mana, most likely leaving its caster with plenty left over to take advantage of the empty, newly vanquished battlefield. 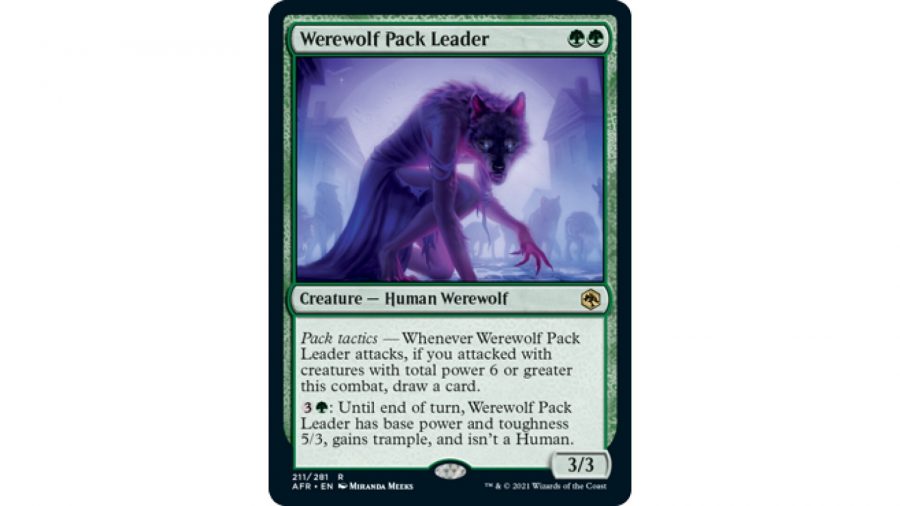 Once upon a time, a two-mana 3/3 with additional powerful abilities would have been unthinkable. Now we have cards like Werewolf Pack Leader, which can become a trampling 5/3 and draw you extra cards as long as you have another creature out to assist. A green staple that can almost run away with the game on its own, this wolf always leaves its opponent’s howling. 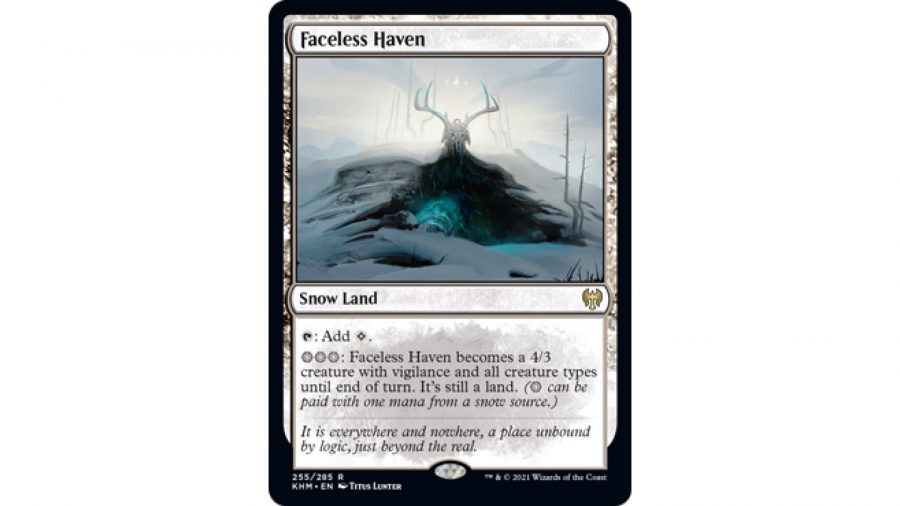 Faceless Haven may not look too flashy, but it’s consistently been one of the most-played Magic cards ever since its release at the top of the year, and that’s because of how little downside there is to using it. If you can cope with including a couple of lands that don’t make coloured mana, there’s no reason not to have a Faceless Haven in your deck.

Lead the way: How to build a MTG Commander deck

It’s basically a free extra creature, a solid 4/3 beater that can pop out of its little hidey hole to swing for decent damage. Since it turns back into a land when the turn ends, it’s tricky to kill with spells, so it’ll often stick around being a nuisance till the end of the game. 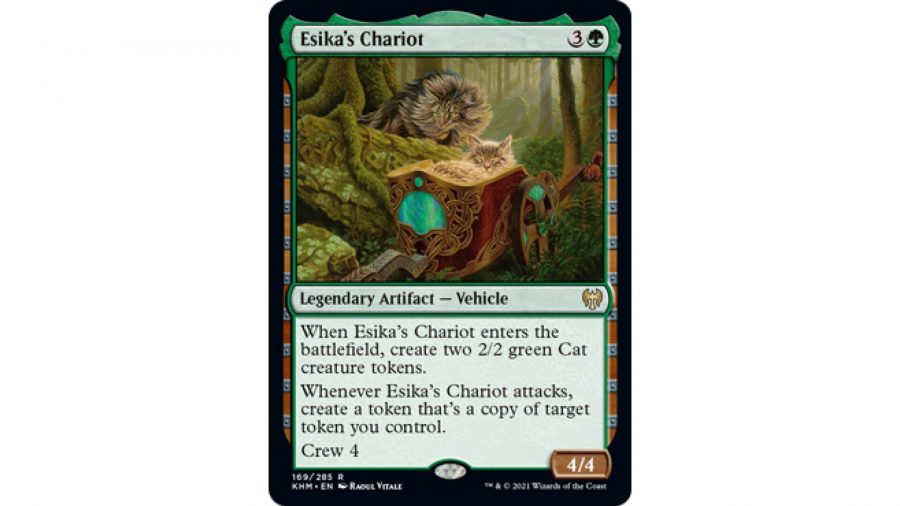 The equivalent of an 8/8 in power and toughness for four mana doesn’t feel fair, and Esika’s Chariot doesn’t let up, copying a token each and every time it attacks.

Hard to remove and with the potential to snowball out of control, Esika’s Chariot has been one of the key pieces in the arsenal of a resurgent mono-green Standard deck. Fail to block the chariot a couple of times and you’ll swiftly be drowning in fluffy kittens. There are worse ways to go, we suppose. 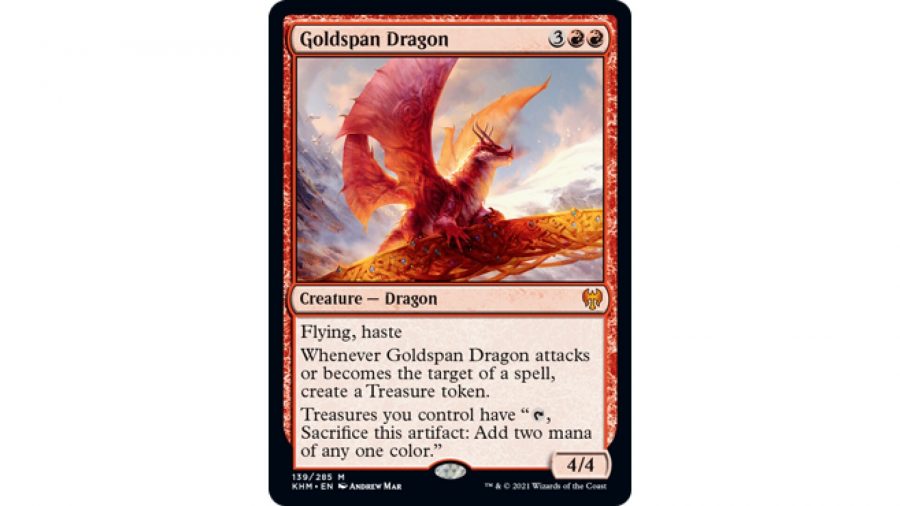 A five-mana 4/4 with flying and haste, Goldspan Dragon is capable of wearing multiple hats on its big, dragony head. It performs well as the large finishing creature in an aggro deck that wants to get in quickly and attack, but because it creates treasure it also has a key role to play in controlling decks that can make use of the extra mana it provides.

Beyond Magic: These are the best trading card games out there

Cards that interact with treasure seem to be increasingly common in Magic, for Commander as well as for Standard, so the sun may not set on Goldspan Dragon for a good long while. 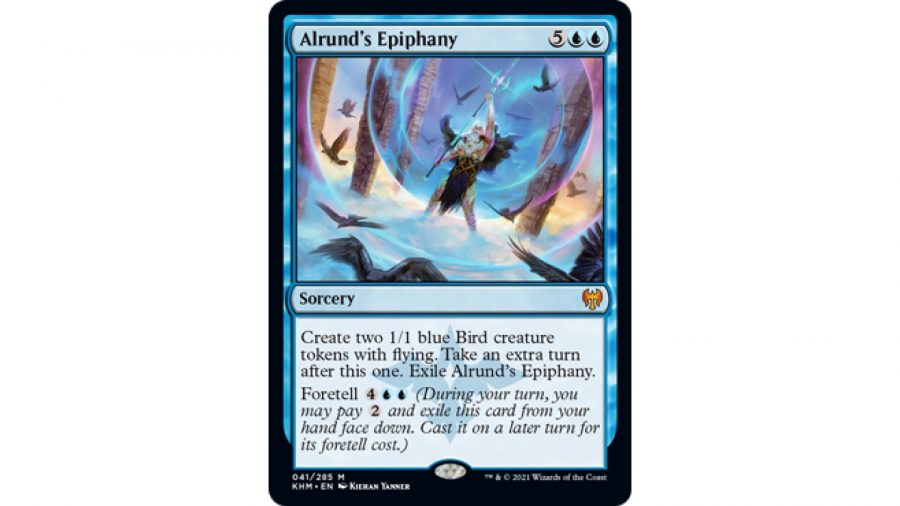 Little doesn’t mean weak!
Ragavan, Nimble Pilferer:An aggressive threat that ramps and draws. That’s pretty much all the best things you can do in Magic, which is why a single copy of this prime primate goes for a cool 80 bucks.
Esper Sentinel:Card draw in white! Need I say more?
Fading Hope: Bounce a creature, fetch a free card from the sideboard. An unassuming spell that’s actually a fantastic tempo play.

A common companion of Goldspan Dragon, Alrund’s Epiphany is that most hated of cards: the extra turn spell. An extra turn might not seem that amazing considering you won’t have much mana left the turn you cast this, but the real power is that it gives you the opportunity for all your other creatures and planeswalkers to provide extra value.

Alrund’s Epiphany is a particularly nasty example of this effect. The foretell keyword enables it to be cast for only six mana, and to add insult to injury it even creates a couple of bird tokens to chip in for extra damage.

Foretell makes the card immune to discard effects, so you pretty much have to counter it or win the game by turn six. Otherwise you’ll suffer the indignity of getting pecked to death by tiny birds as you sit there twiddling your thumbs, waiting for a turn that never comes.