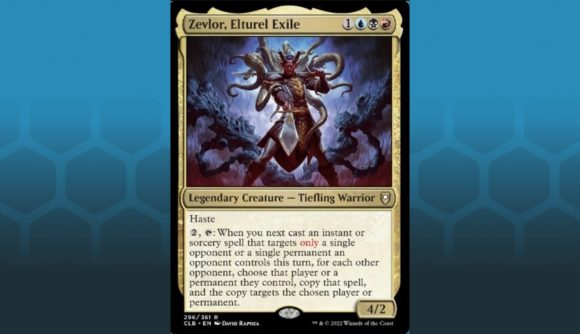 Previews for Commander Legends: Battle for Baldur’s Gate have begun, but physical versions of the first official spoiler card have been printed with a mistake. This upcoming Magic: The Gathering Commander set, filled with legendary creatures from the Forgotten Realms D&D setting, is coming out on June 10. On Tuesday, as Battle for Baldur’s Gate spoilers began to flow, a new card from the set, Zevlor, Elturel Exile, was revealed, on the Command Zone Live. But the card has been immediately altered, slapped with a Day 0 errata.

That means the abilities of this card, which features the Tiefling character Zevlor from Baldur’s Gate 3, will be slightly different from what is written. The innocuous word ‘only’ appears in red on the spoiler image, but will not be printed on physical copies of the card. In play, however, Zevlor should be used as if the word ‘only’ were present.

It must be said, it’s not immediately obvious how the word change affects Zevlor, Elturel Exile, simply because this is a complicated card with distressingly dense rules text. To unpack it in simple terms, this Grixis (Red, Blue and Black) creature has the ability to copy instant or sorcery spells that target just one player or permanent and use the new copies so that every player at the table (except you) gets hit instead. That makes it a great commander option, able to use lots of powerful cards that wouldn’t normally find their way into EDH decks.

As The Command Zone hosts explain in their preview livestream, the word change was required because, without that ‘only’, modal spells that hit your opponents, but also target things on your side of the battlefield could still be copied. With Sublime Epiphany, in a four-player game, you could therefore bounce one opposing creature, draw four cards and clone four of your own creatures. Bit broken. 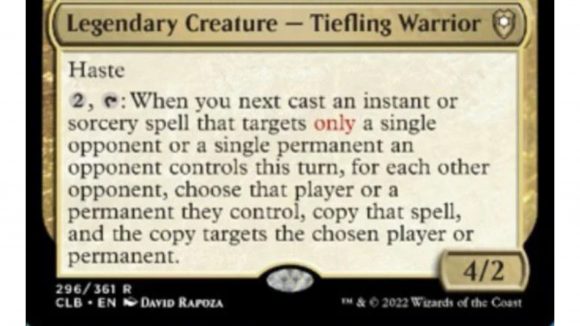 Yesterday, before Commander Legends Baldur’s Gate spoilers began, Magic: The Gathering’s head designer, Mark Rosewater shared a teaser, hinting at some of the cards that can be found in the set. Notable inclusions are an Elephant Angel (which can surely only be Lulu the Hollyphant from Descent into Avernus), three D&D Gods, and “a card capable of making an Ox, Boar, or Goat”.

Commander Legends: Battle for Baldur’s Gate is releasing on June 10. It’s a Commander set that features an unusual number of legendary creatures, and is designed to be drafted. It will be sold in draft, set and collector boosters, and there’ll also be four Commander decks: Party Time, Mind Flayarrs, Draconic Dissent, and Exit from Exile.