Warhammer 40,000: Darktide was announced by developer Fatshark in July 2020 – supposedly after hordes of grimdark gamers beseeched the Swedish studio to make a 40k-themed version of 2018’s Vermintide 2 – and the game has only looked more promising since then. In fact, with the possible exception of the then unreleased turn-based strategy battler Warhammer 40k Battlesector (which proved imperfect, but highly playable at review), we hadn’t been this excited about a Warhammer 40K videogame in a long time.

It’s billed as another four-player co-op action extravaganza, taking Vermintide’s extremely successful hack-and-slash melee combat, adding in some classic 40K ranged weapons, and dumping you into the remarkably scary-looking, dark bowels of a Chaos-infested hive city to survive (plus, if you’re lucky, bring the light of the God-Emperor to some heretics).

With Vermintide 2, Fatshark proved it could produce a truly atmospheric, lore-appropriate Warhammer world, and match it to best-in-class first-person slasher gameplay, to create one of the best Warhammer fantasy videogames of all time. Now, the 40K community is eagerly waiting to see if Darktide can repeat the feat for Games Workshop’s flagship sci-fi setting – and, so far… well, it’s looking pretty good.

Here’s everything we know about Warhammer 40K: Darktide. 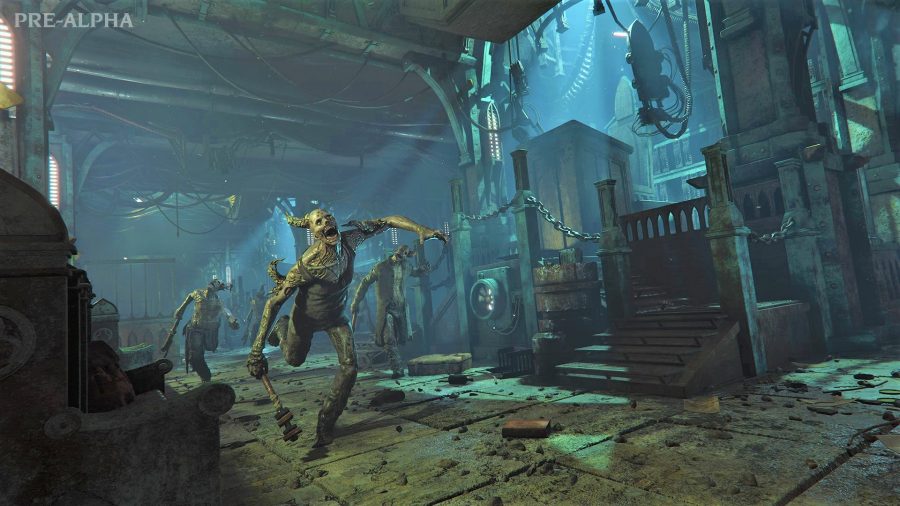 Since FatShark announced a delay to the game in July 2021, the scheduled Warhammer 40K: Darktide release date was thought to be Spring 2022. However, a further delay announced on 31 March, 2022 revealed the release date would be 13 September, 2022.

It’s still slated to be released for PC and Xbox Series X/S. 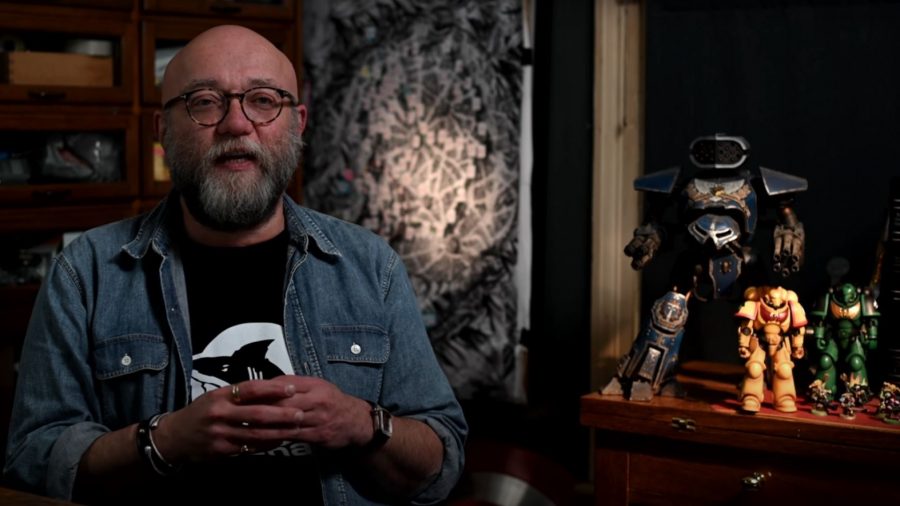 Before that, a Warhammer 40K: Darktide trailer was revealed as part of Games Workshop’s Skulls! Livestream on June 3, and dropped the intriguing news that veteran Warhammer 40K novelist Dan Abnett was working with Fatshark on the game’s writing.

Darktide is about baseline humans, surviving against the odds

The driving point of Abnett’s commentary here is to underline the game’s focus on human stories. Far from the hyper-energetic clashes of power-armoured Space Marines and bio-weaponised alien behemoths elsewhere in 40K’s horrendous galaxy, Darktide is about baseline human fighters who simply have to make it through, against the odds. The phrase “survival horror” is used – whether for good or ill, we’ll find out on the game’s release…

For a bit more depth on the human stories Abnett means to tell through Darktide’s gameplay, you need to read this excellent interview with the man himself, over on our sister website PCGamesN. 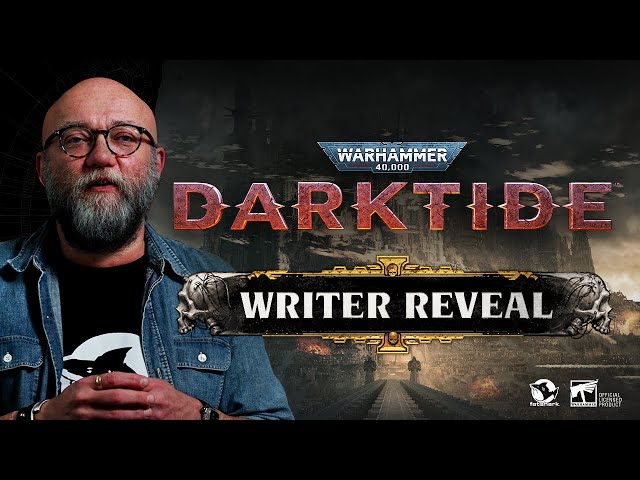 Before that, we got our first glimpse of Darktide’s gameplay in its first ‘proper’ trailer, released on December 11, 2020.

Here, we had a decent shifty at the playable squad members in the game (including the Ogryn), and some appropriately gore-soaked footage of first-person melee combat, with the player using a chainsword, power hammer and combat knife to chop through what look like Chaos-addled cultists and traitor guardsmen.

Cogitator games: These are the best Warhammer 40K games

The second half gets all shooty, showing off the massive slug shotgun the Ogryn trooper carries, a couple of lasgun variants, an autogun, and the humble frag grenade, among other implements of death.

We also see a rather distinctive-looking spiky-helmed traitor guardsman, who seems like they may be important. 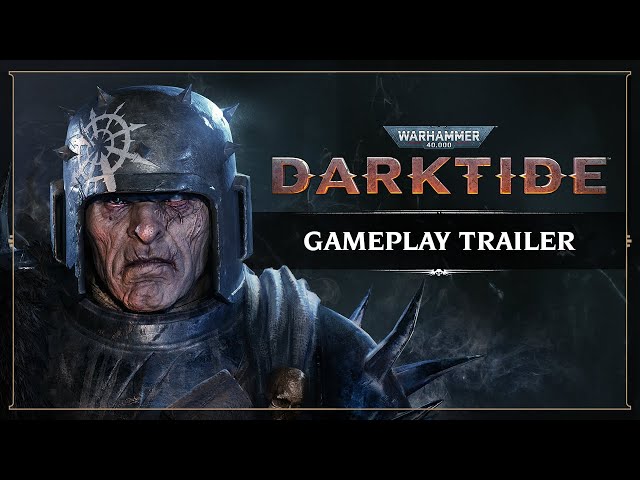 Before that, all we had was the original teaser trailer from July 2020, which whet all our appetites for the idea of a four-person Imperial Guard squad trying to survive in the terrifying hellscape of a Chaos-dominated underhive, where all the lights are mysteriously out of action… 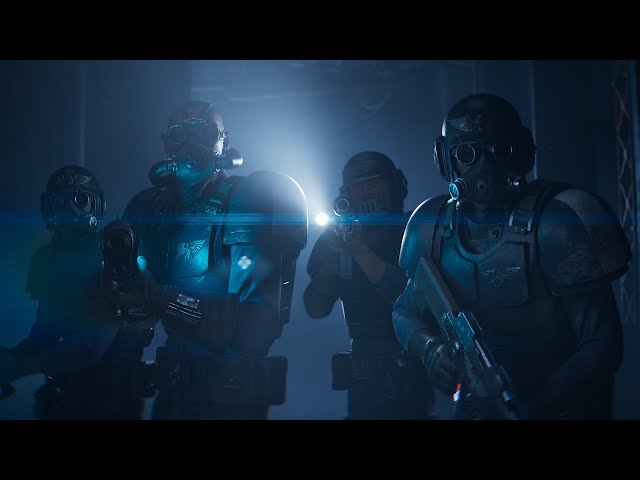 We, er… we don’t think those guardsmen made it out. Just saying.

From the most recent “writer reveal” trailer, we now know that the player starts the game as a prisoner (cribbing notes from The Elder Scrolls, are we, Fatshark?) but is then recruited by the Inquisition – a secretive and hugely powerful faction within the Imperium of Man. 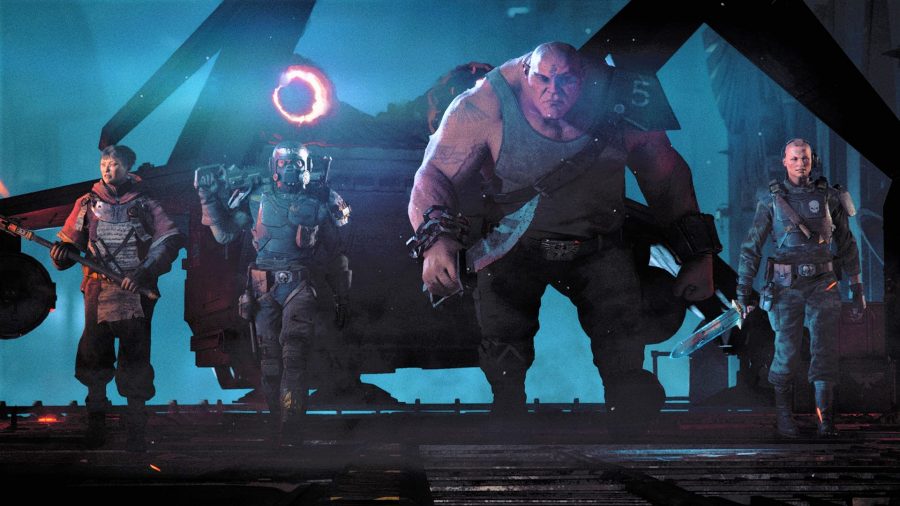 While it was strongly hinted that the hapless all-guardsman team from the original teaser trailer got thoroughly deaded (RIP faulty torch guy), December’s official gameplay trailer introduced what look to be our four starting player characters:

As per Vermintide, we can confidently expect them to be pre-set with names, backstories and personalities, rather than DIY, customisable RPG-style affairs.

Beyond the core team, we know of two other potential big players: 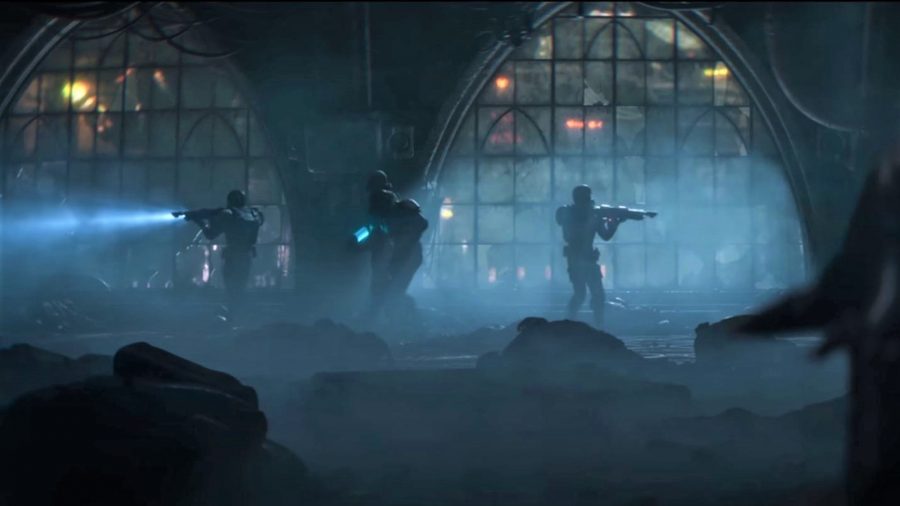 Back in the original teaser trailer, the voiceover is heard – in plummy, aristocratic, British-English tones that scream ‘high-born Imperial citizen’ – reporting to an Inquisitor that they have arrived at the planet, and assembled their “recon team” (that’s you, chum) to investigate certain levels of the hive city.

Read up: Check out the ultimate Horus Heresy reading order

It seems evident that this apparent inquisitorial agent will be the one pulling your team’s strings, setting missions for you to complete – but we don’t yet know if they will be a fully realised, named character in the game’s story, or more of a shadowy puppet master. 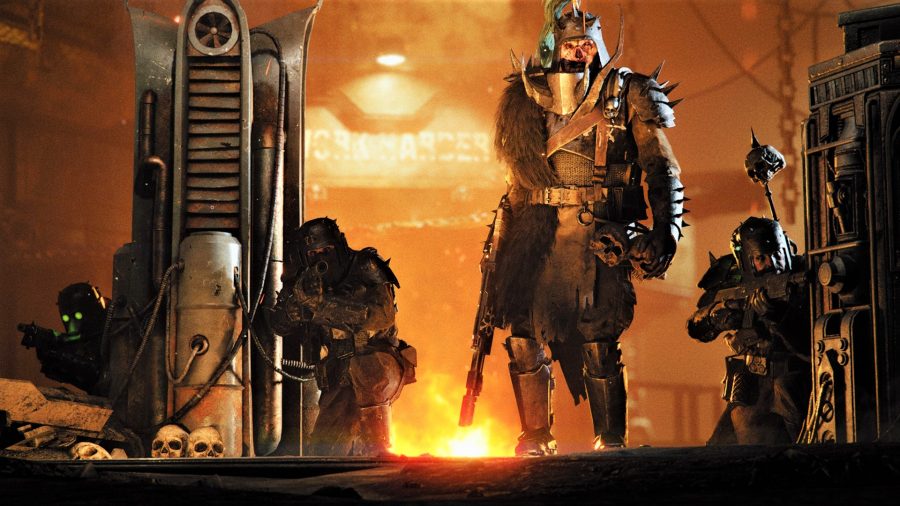 In the second half of the December 2020 gameplay trailer, we meet a distinctive, badass-looking chap, apparently in charge of some Imperial Guard soldiers who have turned traitor and joined Chaos.

Flanked by fellow corrupted troopers, this guy’s arrival seems choreographed to add maximum evil vibes. Standard Guard uniform modified with chainmail, spiked plates and a spiky helmet; an etched human skull at his belt; and a face uncovered to reveal mouldering flesh and bone – it’s the very model of a scary (yet human) 40K villain.

Dollars to donuts, this fella is one of our main antagonists. 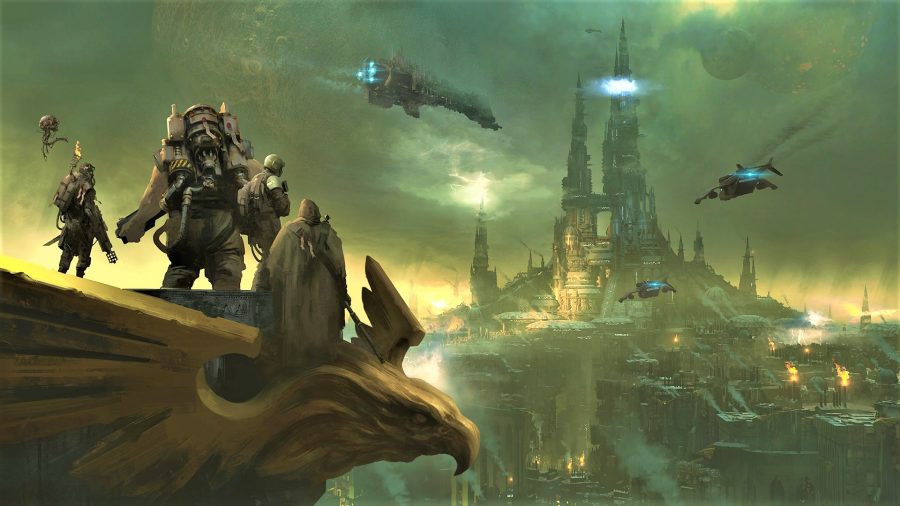 Darktide is set on the planet Atoma Prime, in a continent-sized, ultra-dense hive city named Tertium. In the writer reveal trailer, Black Library darling Dan Abnett describes Tertium as “a vital Imperial holding, essentially the capital of an enormous area of space,” and “home to billions of loyal Imperial citizens”.

“It’s not the sort of thing you want to lose – but it’s also a way for Chaos to get into the Imperium, which [the Inquisition] can’t allow to happen,” he adds. 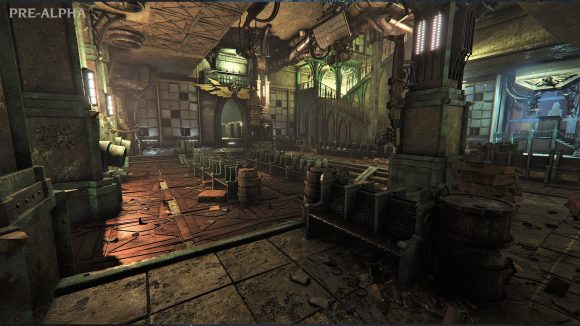 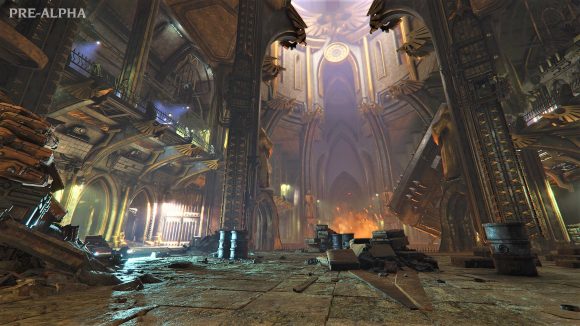 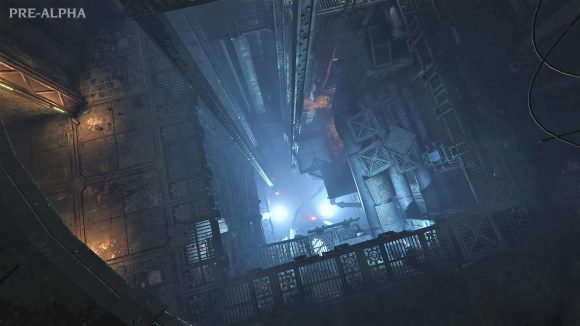 In terms of in-game environments, the setting of a hive city allows for more variety than you might think.

Since these places house billions of people, spanning thousands of miles across (and often many miles beneath the planet’s surface, and miles upwards too), there’s scope for missions to explore all sorts: habitation blocks; vast market districts; factory units; acres and acres of churches, temples and cathedrals; surface level streets, hive ‘stacks’ (miles-high skyscrapers that make Judge Dredd’s megacities look like Lego villages), and more. 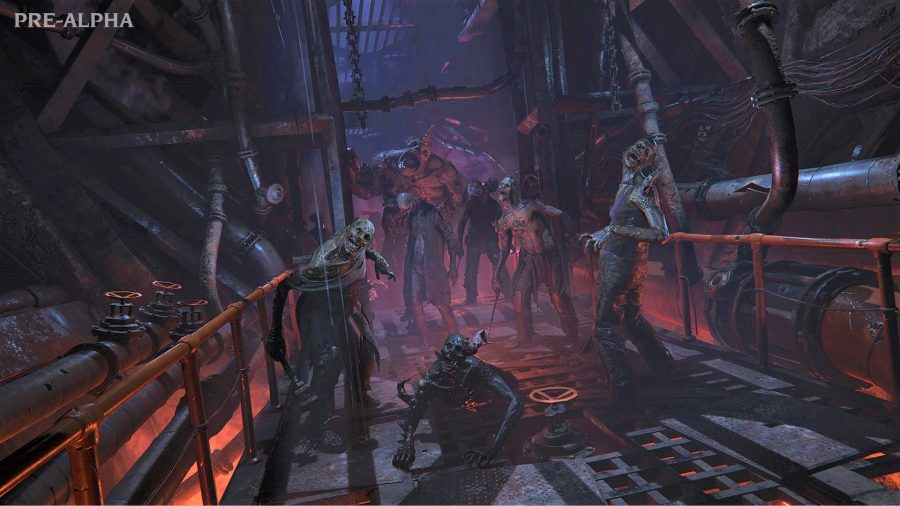 In Warhammer 40K lore, these sorts of places are pretty bleak, soulless and overwhelming at the best of times – but in Darktide, it would seem Tertium has an even worse problem: a Chaos uprising.

In the 2020 teaser trailer, we saw the recon squad exploring “level six” of Tertium hive, and discovering a crowd of ghoulish, shambling humanoids (and one shadowy hulk that might be a corrupted Ogryn) which look suspiciously misshapen and diseased.

As such, it’s a pretty fair bet that Nurgle, the Chaos god of plague, decay and contagion, is working his feculent magics upon Atoma Prime. 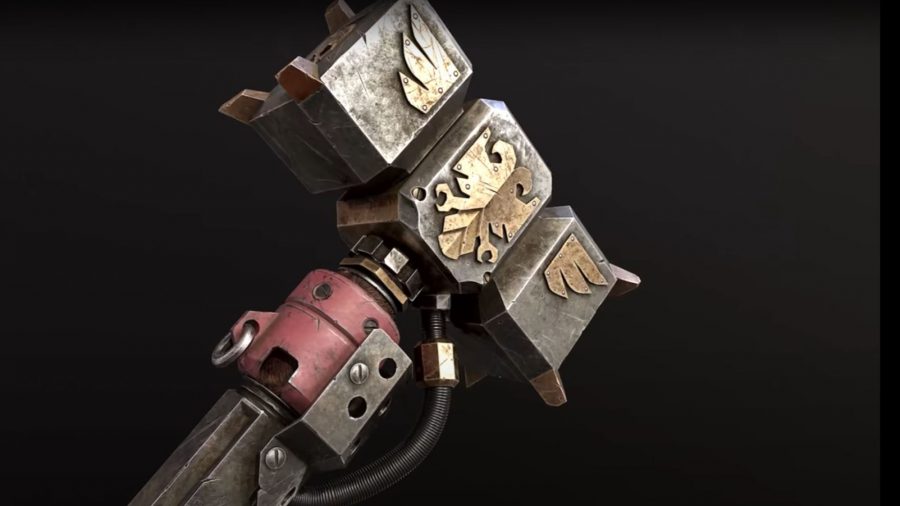 The three trailers we’ve seen so far have been fairly open-handed in showing the game’s gory, grimdark arsenal – we’ve seen crunchy and blood-spattered footage of various melee and ranged weapons so far:

There are some classic 40K weapons we haven’t seen yet, too, which we’d guess may still make an appearance. Take your bets, folks…

Rest assured that our eagle eyes are out for any whisper of an update on Warhammer 40K: Darktide, and we’ll keep this guide updated with the latest on the game as we go along. The Emperor protects. Probably.