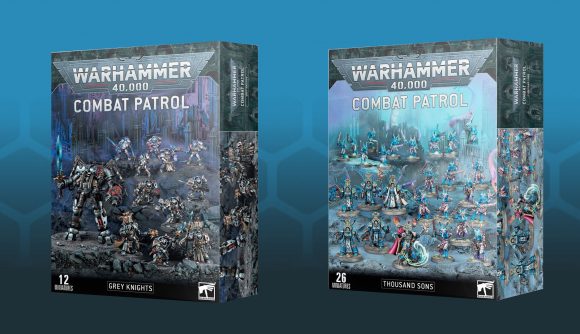 Whether you’re dedicated to destroying daemons or bringing ruin to the False Emperor’s sycophants, Games Workshop has something for you. Two Warhammer 40k Combat Patrols go up for pre-order on Saturday, one for the Grey Knights Space Marines, and one for the sorcerous Thousand Sons Chaos Space Marines. Designed to provide all the forces a player needs to field an instant Warhammer 40k army, both Combat Patrols contain over a dozen models. They’ll be available on March 19 and should cost $150 / £90, assuming GW’s recent pricing pattern holds true.

If numbers are your prime concern, the Thousand Sons box is the clear winner, with 26 miniatures to the Grey Knights’ 12. That’s mainly because it houses a whole herd (or possibly a flock) of mutant Tzaangors, with 20 of the blue goat-bird folk in total. Alongside the beasties, the Combat Patrol also has five Scarab Occult Terminators, and leading the troops is an Infernal Master, replete with floaty daemon friends and hazardous burning shoulder pads (surely his horns catch fire when he turns his head?)

Though their Combat Patrol has just 12 miniatures, the psychic, daemon-hunting Grey Knights take the prize when it comes to size – as the box packs a towering Nemesis Dreadknight. Alongside the powerful mech, there’s ten Grey Knights in the box – five with chunky Terminator armour and five regular marines (including parts to make them into various specialist units of your choice). They’re led by a Librarian in Terminator armour.

Alongside the Combat Patrol pre-order announcement, which came in a Warhammer Community article on Sunday, GW also revealed that leaders for both these factions will be sold separately for the first time. The aforementioned Infernal Master for the Thousand Sons, and Castellan Garran Crowe for the Grey Knights, were previously only to be found in last year’s Hexfire Battlebox, but you’ll now be able to pick them up as solo models. Might be handy if you’ve got all the marines you can handle, but need someone to lead your forces. 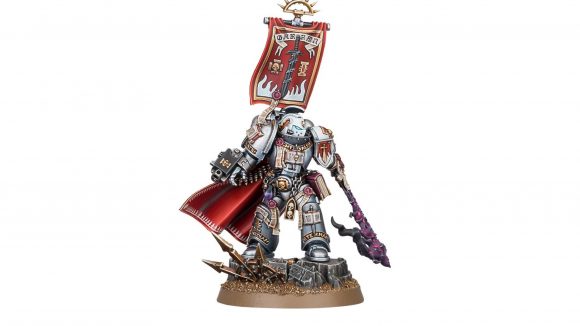 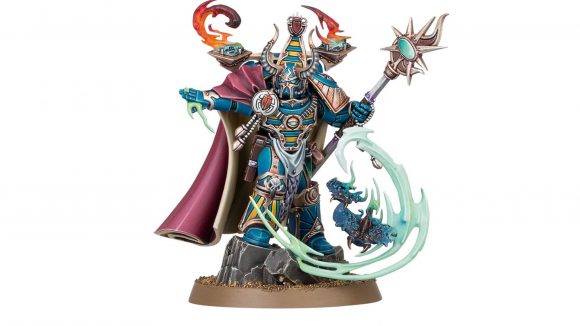 In case you’re struggling to keep up with all the recent Combat Patrol news, here’s the lowdown. The new Eldar Combat Patrol is coming in April. A new Tyranid Combat Patrol was announced last week alongside the first Tyranid Codex previews, but a release date is still unclear. And, of course, The Thousand Sons and Grey Knights Combat Patrols are coming shortly and are available to pre-order this weekend. But hopefully you knew that one by now.

If you need some army-building assistance, try our Warhammer 40k detachments guide for size. And why not bookmark this handy Codex release dates guide, so you won’t miss any of the year’s 40k Codexes?