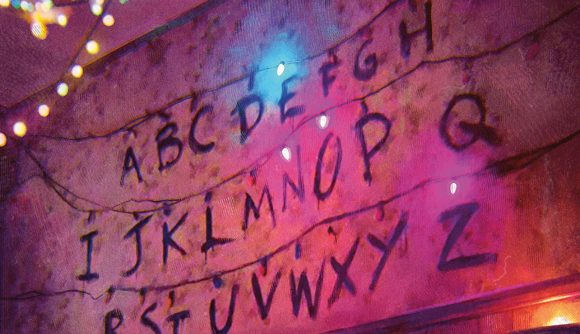 Reprints of the Stranger Things Secret Lair cards, redesigned to fit into the world of Magic: The Gathering, were shown on Wizards of the Coast’s Weekly MTG stream on Thursday. The main event of that stream was, of course, the new spoilers for Streets of New Capenna, but towards the latter half, we got to see the nine cards from the Secret Lair x Stranger Things mini-set reimagined as characters and locations from the plane of Innistrad.

Released late last year in one of Magic: The Gathering’s limited-availability Secret Lairs, Secret Lair x Stranger Things contains Eleven, Mike, Dustin, and the rest of the Stranger Things gang (as well as The Mind Flayer and Hawkin’s Lab) in MTG card form – mainly as Legendary creatures that could be used as powerful Commanders.

But when they were first revealed in a Good Morning Magic video in June 2021, alternate versions of the cards, with MTG-appropriate names and artwork, were promised. And now here they are. Instead of Eleven, the Mage, you can play Cecily, Haunted Mage. Instead of Chief Jim Hopper; Sophina, Spearsage Deserter. One of the cards will be located in “approximately one in every eight” Streets of New Capenna Set Boosters.

These cards will be a welcome addition to the game for the subsection of Magic: the Gathering fans unhappy about the involvement of third-party IPs. Now there’s an in-universe alternative with exactly the same statline, casting costs, and abilities of all the Stranger Things Secret Lair cards. 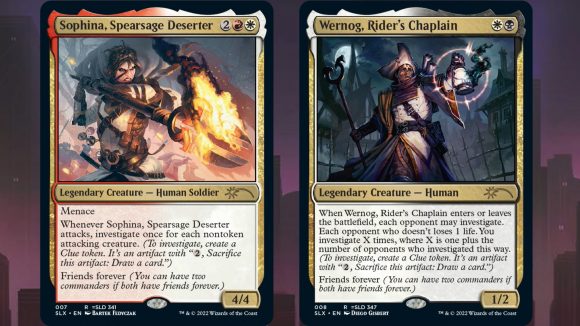 For the most part, the redesign appears fairly seamless. The cards’ mechanics fit the newly designed creatures, and the new versions have the set code of the Secret Lair printing at the bottom to avoid confusion. The only thing that seems slightly odd is the new Innistrad cards still have the ‘Friends Forever’ ability, which references the Stranger Things show. It seems as though it would have been a doddle to switch this out for the very similar Partner ability, though perhaps Wizards wanted the cards to only work with one another.

It’s worth noting that this method of re-releasing cards with in-universe artwork is being used for all Secret Lairs dealing with third-party IPs, such as the upcoming Warhammer 40k  Secret Lair. However, it will not be used in the larger Universes Beyond sets, such as The Lord of the Rings: Tales of Middle-Earth set slated for 2023, presumably because of the higher number of cards involved. It may be simple enough to ‘reskin’ and distribute a handful of cards, but a full set would be much trickier.