So, you want to learn how to play Magic: The Gathering? A noble undertaking, certainly. It’s a fantastic collectible card game, offering complex strategy, tense showdowns, and with an unmatched diversity of playstyles to try out. We’ll get to all that eventually, rest assured – but, for this guide, we’re assuming you’re a fresh-faced new player who’s just been dropped off for their first day at MTG school (presumably in adorably oversized robes that you’ll grow into) bright-eyed, bushy-tailed and eager to learn.

Most likely, you’ve picked up a couple of starter decks and are now itching to try them out, or perhaps you’ve even had a shot at building your own Magic: the Gathering deck. Either way, we’ll get you from bewilderedly scanning the cards, looking at the pretty pictures, to actually playing your first game.

Don’t worry if you still have some niggling queries once you’re up to speed on the basics. The official comprehensive rules document is 252 pages long, so we can’t cover everything right away. However, with the help of this guide, you should be slinging spells and commanding hordes in next to no time.

First: just what is this so-called legendary card game about, exactly? 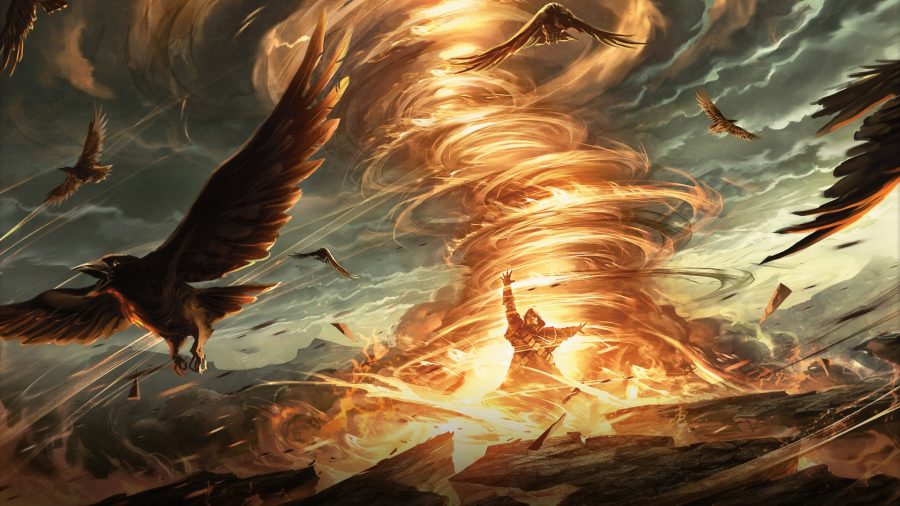 A game of Magic: the Gathering represents a showdown between two powerful mages.

In Magic, you normally win by getting your opponent’s life total to zero

They’re typically won by reducing your opponents’ life total to zero, some you achieve by siccing an army of summoned critters on them, and backing them up with mighty spells. Unfortunately, your opponent will have the exact same goal, resulting in an arcane tug-of-war, each player trading blows until one stands victorious. At the beginning of a match, both players begin with seven cards in their hands, and you’ll draw one more at the start of each of your turns. These cards will either be permanents (Creatures, Artifacts, and more) which remain on the battlefield once played, or Instants and Sorceries, which have an immediate effect and then disappear. 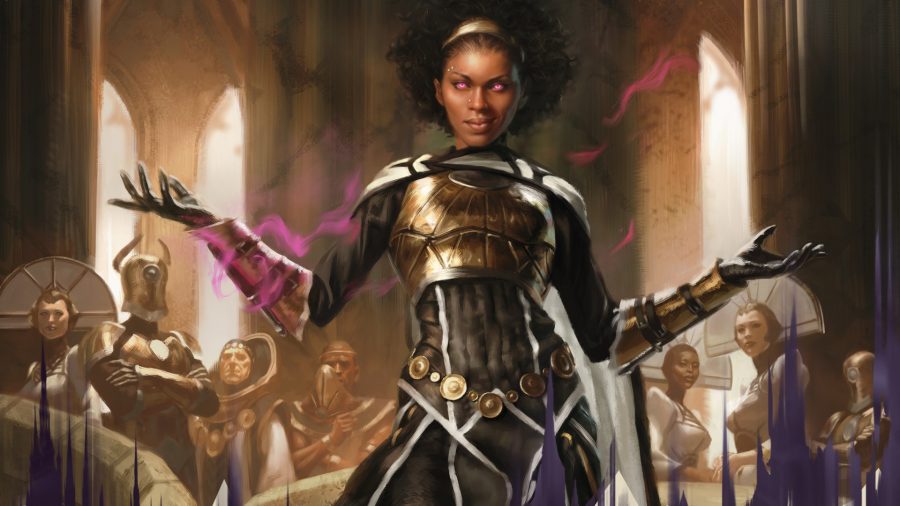 You’ll always want at least a few of your starting cards to be Lands, as these generate mana. Mana is extremely vital. It’s your power source, and you’ll need to pay a mana cost pretty much every time you play a non-Land card.

To use a Land, you have to ‘tap’ it, meaning you turn it sideways to indicate it’s done its thing. It’ll stay like that till the start of your next turn, when all your cards ‘untap’, ready to spring into action.

You can only play one Land a turn, meaning you’ll naturally gain access to more mana and more powerful spells as the game goes on. Different decks are optimised to take advantage of this in different ways: some want to play a lot of small spells very swiftly, to try and win the game early, whereas others merely want to hang on in these early turns, until they can win with bigger spells.

As well as the amount of mana you have available, you’re also limited by its type. Magic cards are split into five different ‘colours’, which each excel at different strategies, and you need the right coloured mana to be able to play them. While you can cram all five colours into one deck, in order to consistently be able to pay the mana cost of cards, most stick to just a couple. 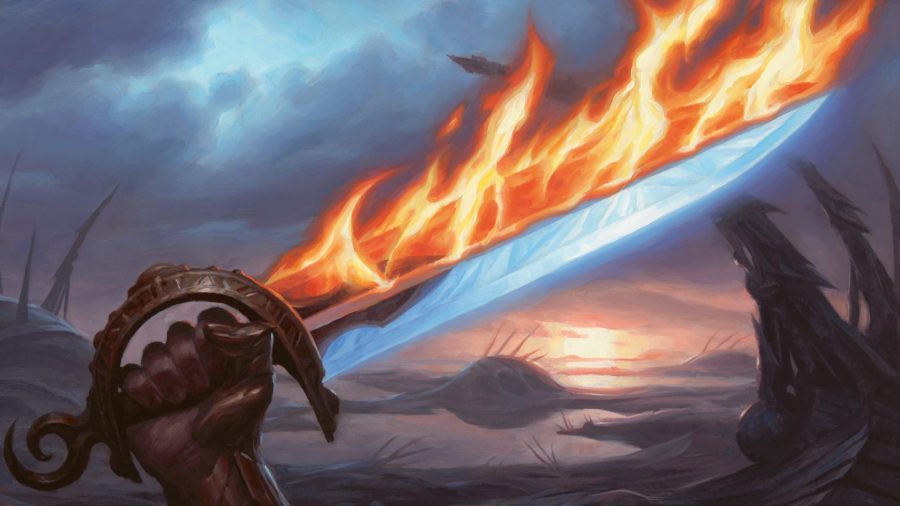 Combat in MTG can be split into three steps. First, you choose which creatures you want to attack with, and send them rampaging towards your opponent, tapping these creatures to show that they’ve attacked.

The defending player then assigns ‘blockers’, intercepting your creatures with any of their own, as they see fit (so long as they’re untapped, meaning they didn’t use them to attack on their turn). After that, damage is assigned simultaneously.

Bigger games: How to build a MTG Commander deck

All blocked creatures deal damage according to their power to their blockers’ toughness, and all blockers deal damage to their attackers in the same way. Meanwhile, any creatures that made it through unimpeded strike the opponent directly.

It’s worth bearing in mind that, unlike in many games, all damage done to creatures gets healed as soon as the turn ends. That means it’s no good half-killing a creature, you’ve gotta commit! 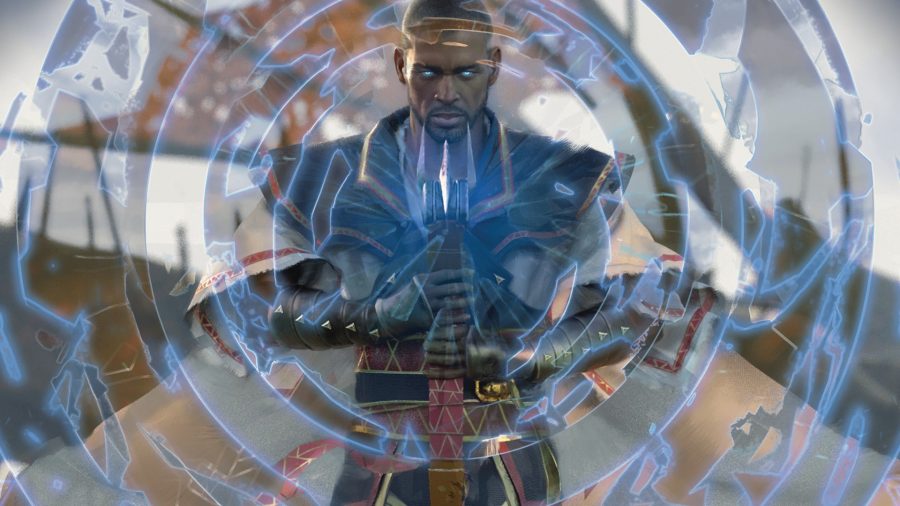 One quirk to keep in mind is that effects resolve in the reverse order to that which they were played. This means you can interrupt a spell or effect with one of your own, and yours will go first. In Magic, it’s powerful to be the last one to act.

Alright, you’re done well so far, so now it’s time to dive into the real nitty gritty. I’m talking about turn order. Not the order of turns, which is pretty straightforward (you, them, you, them), but the order that things happen within each turn.

First you have the ‘Beginning Phase’. Here, you untap everything on your side of the battlefield and then draw a new card. Now you’re ready to get started.

Then comes the Main phase, where you can play your lands, creatures and any other card type you so choose.

After that comes Combat, which you’re already well-versed in. 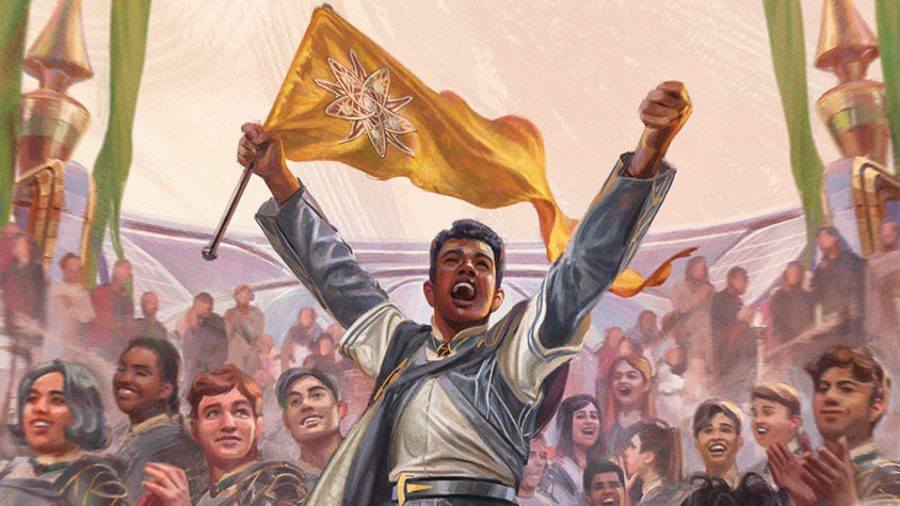 Then there’s a Second Main Phase, which works just like the first. Having two gives you flexibility and makes your decision-making more complex.

Do you play cards right away to make use of their abilities in the combat step, or do you hold off, so your opponent doesn’t know what you’re going to use your mana for?

Get with the times: MTG Modern Horizons 2’s best cards

Bear in mind that Instants are the only card type that can be cast outside of your main phases – they can even be used on your opponent’s turn!

As such, they allow for mind games and trickery, beefing up creatures in the midst of battle, or wasting your opponent’s mana by killing the creature they were about to equip with a weapon or magical enchantment. 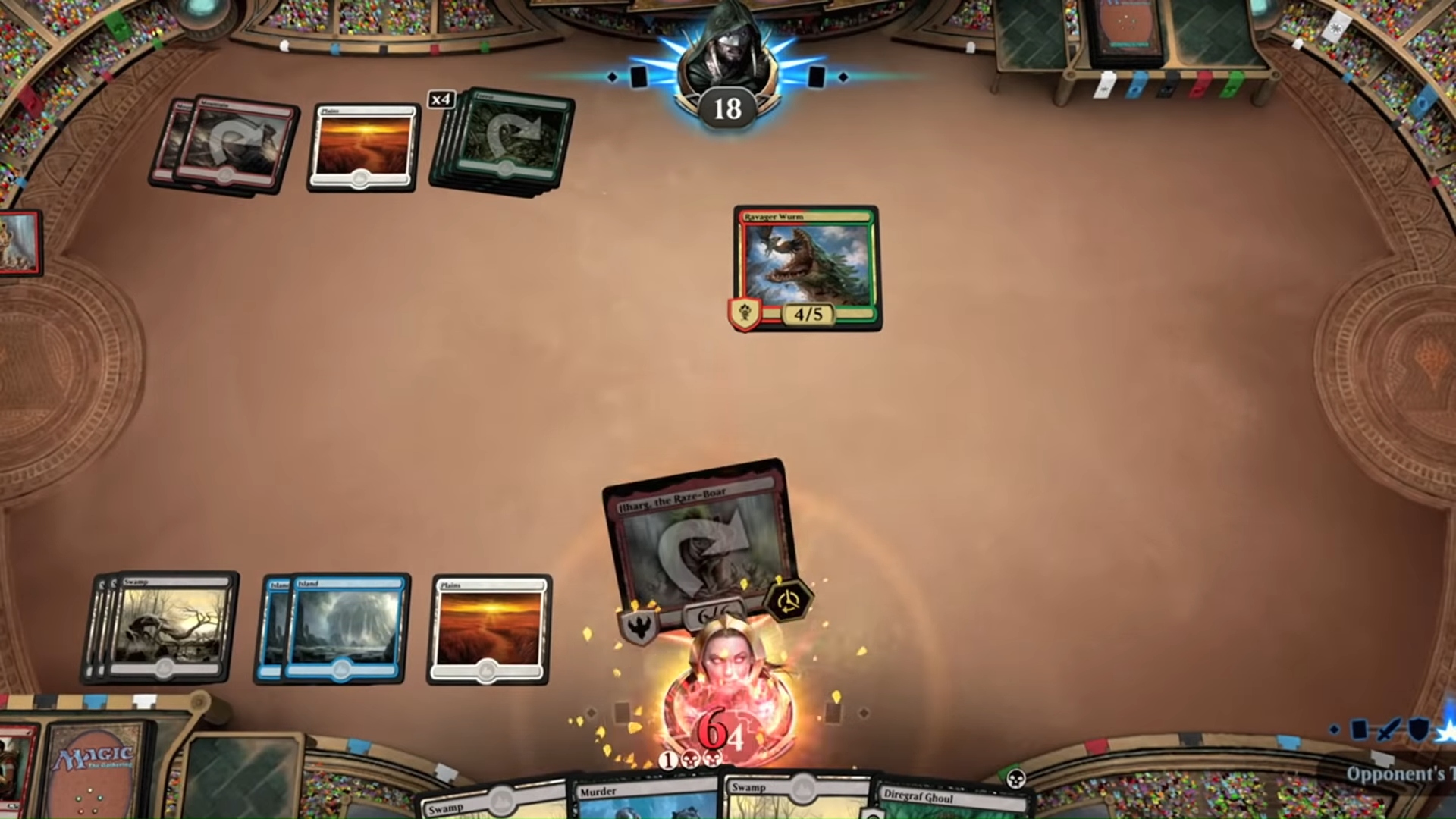 Start with Magic: The Gathering Arena

If you want to get a bit of practice in, there’s always MTG Arena. For those who don’t know, this is the free-to-play digital version of MTG and playing it before investing in your own deck is a good way to get to grips with the rules of the game (especially as it won’t let you make accidental illegal moves).

Sometimes playing against human players can be a bit daunting, especially when they’re seasoned MTG fans, so MTG Arena can give you a warm up with computer opponents, helping you to feel more confident as you play. You could even progress to human players in MTG Arena before you face humans in real life, because at least there’s no awkward fumbling when you’re just looking at a screen.

Either way, we hope we’ve filled you in to put you in a strong position for your first game of MTG – be it online or off.