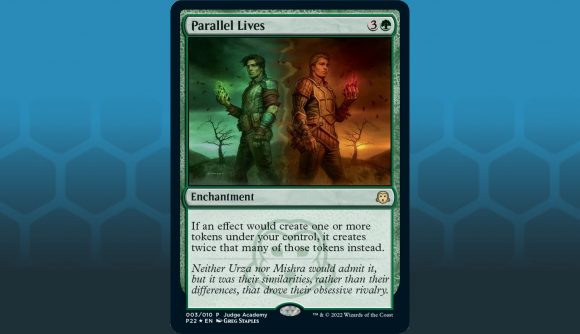 Since 1998, Magic: The Gathering fans who’ve honed their rules knowledge and taken up the mantle of judge at official MTG tournaments and events have been rewarded by Wizards of the Coast with unique MTG judge promo cards. Shown for the first time on the Judge Academy Twitter account on Wednesday, the judge promos for April to June 2022 include a version of the card Parallel Lives featuring Urza and Mishra.

These are the two main characters (and combatants) of The Brothers’ War, a historic event from Magic’s past, which features in this year’s upcoming MTG set of the same name. The special judge promo version of Parallel Lives will be awarded to those attending physical or digital judge conferences in April through to June. It seems to be serving double duty for Wizards, as a unique collectors item for judges, and a way to build up more The Brothers’ War hype.

The card depicts a much younger version of Urza and Mishra than Magic fans are used to seeing, perhaps because we’re travelling back in time for The Brothers’ War set. It’s unmistakably those bothersome brothers though, standing back to back just like on the cover of The Brothers’ War MTG book, each clutching one half of the Thran powerstone that starts off their scrap.

Intriguingly, the judge promo card’s flavour text draws comparisons between Urza and Mishra, claiming that “their similarities, rather than their differences, drove their obsessive rivalry.” It’s certainly the case that while Mishra’s a bad egg, Urza’s not the most moral hero in the Magic: The Gathering multiverse. 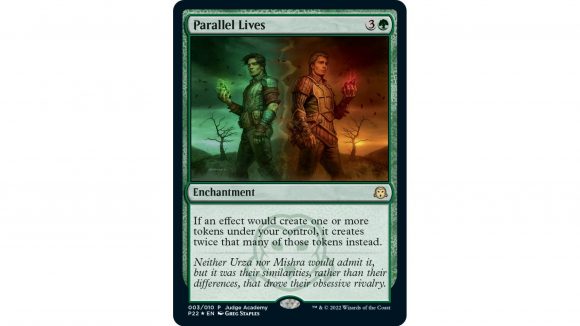 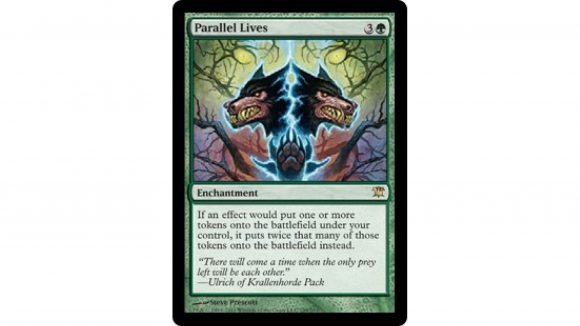 Unique artwork aside, Parallel Lives, a green enchantment originating from the original 2011 Innistrad set, is a valuable card in its own right, slotting ever so neatly into token-making Commander decks. It’s a long shot from being one of the most expensive MTG cards of all time, but is still a powerful and sought after card.

It’s certainly more useful than the other judge promo that’ll be awarded to April-June digital conference attendees, the rather niche Stranglehold. This judge promo has unique artwork of Jetmir, however, one of the faction leaders from the soon-to-release Streets of New Capenna set – so it’s still probably a nice pickup for fans of demon kitty-cats. 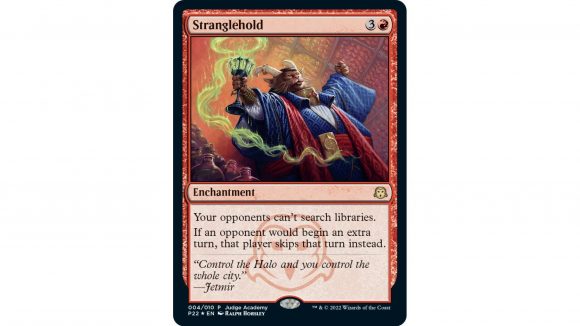 Notably, 2022 is the first year that judge promos are not being mailed out to judges. Instead, they’ll only be available to those who attend judge conferences.