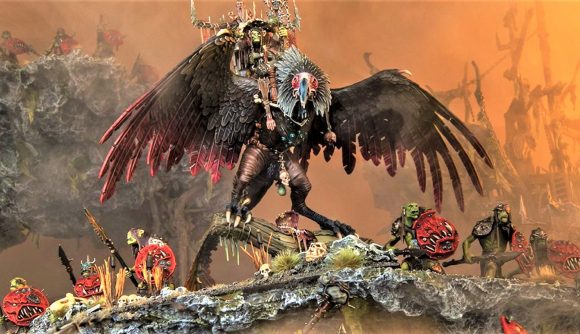 Age of Sigmar Kruleboyz players now know a little bit more about the recently announced Big Boss of their faction, Gobsprakk, the Mouth of Mork, after Games Workshop revealed the unreleased character unit’s movement stat, his weapon damage, one ability and one spell unique to Gobsprakk, and two other new Kruleboyz spells in a Warhammer Community article on Monday.

Mounted on his vast, winged Corpse-rippa Vulcha mount Killabeak, Gobsprakk will have an incredibly sprightly 14” move, allowing him to swoop around the board with ease. His (apparently extremely long) Bogbark Staff, meanwhile, has a 3” range, and deals d3 damage a pop. Not terrible, for a highly mobile character who’s been billed entirely as a magic specialist.

And, in addition to his already showcased passive ability Mork Sez No (which doles out either d3 or d6 Mortal Wounds to the would-be-caster every time he unbinds an enemy spell), Gobsprakk will also have a unique spell titled Summon Boggy Mist, allowing you to exert excellent battlefield control by buffing all your charge rolls by one, and simultaneously debuffing all your enemy’s by one.

The two newly revealed general Kruleboyz spells also lean hard into the faction’s running theme of using the spooky disorientation and hidden dangers of its swampy home turf to outmanoeuvre and defeat enemies. 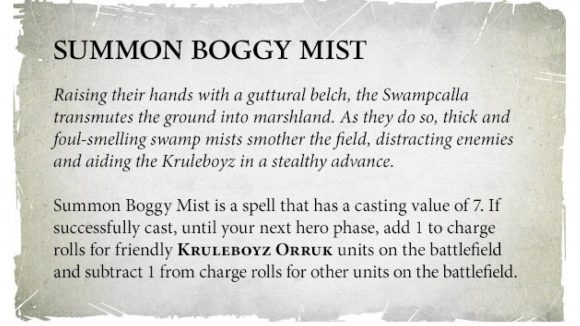 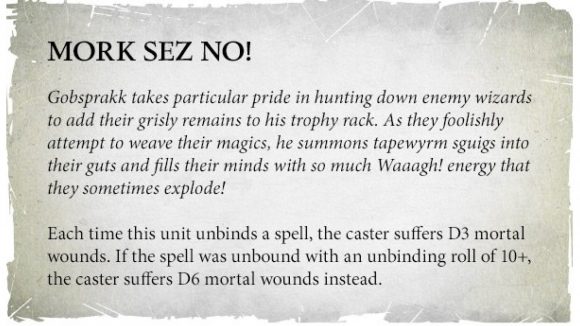 Sneaky Miasma lets any of the Kruleboyz’ various deadly Monster units perform a double-move to get right up in the enemy lines double quick – while Da Black Pit is a pretty strong Mortal Wound-dealing attack spell that’ll be absolutely brutal against anything with a good armour save (like, say, Stormcast Eternals). 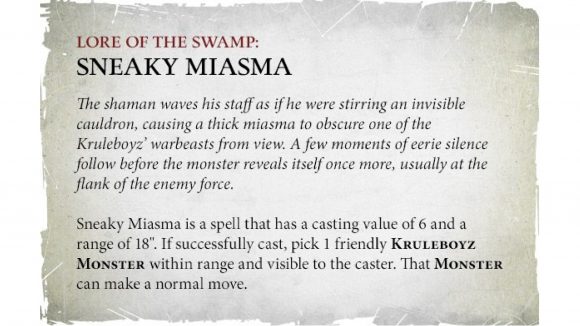 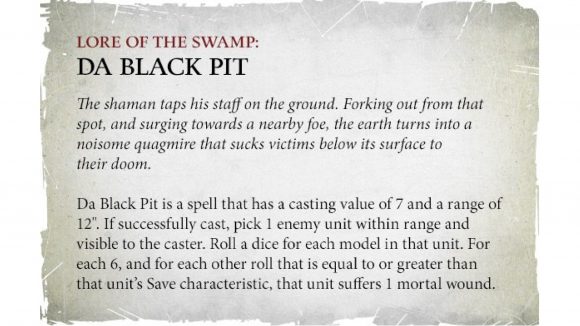 Plus, we learn that Gobsprakk’s little Grot companion Rinklefinga (the fellow poking his head through the curtain to the side of the Big Boss’s throne) is not, after all, holding an innocent sweet potato, but rather a Screamin’ Mandrakk – an all-natural, meat-free anti-Wizard screeching device.

Gobsprakk can activate this rowdy root once per game to roll one extra d6 when unbinding an enemy spell, drastically increasing the chances of both success, and rolling the magic 10 or more to deal the full d6 Mortal Wounds with Mork Sez No. Yikes. 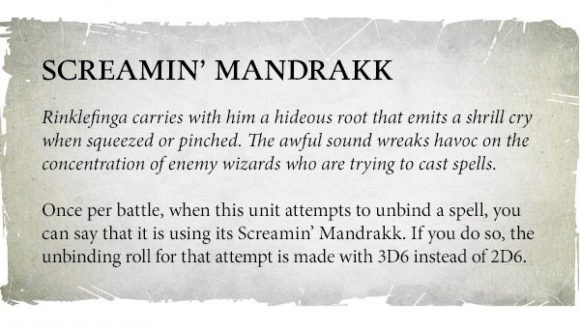 Monday’s article comes after we got several teasers for the contents of the upcoming Orruk Warclans battletome – due out later this month – including details of two subfactions within the Kruleboyz, as well as special ‘Big Waaagh!’ rules for fielding an army containing Kruleboyz, Ironjawz, and Bonesplitterz units.

That book is planned to be released alongside the brand new Stormcast Eternals battletome, which, as well as all the new Thunderstrike Armour units revealed with Age of Sigmar 3rd Edition and the Dominion box set, will feature full rules for Krondys and Karazai – two massive dragon character models – and the new Draconith dragon-riding Stormdrake Guard.

What else is new in Warhammer? Well, Kill Team: Octarius goes to pre-order this Saturday, for a special two-week pre-order window; the 9th Edition Grey Knights codex has been previewed; and we’ve got a brand new guide to 40k’s Eldar Craftworlds for you.