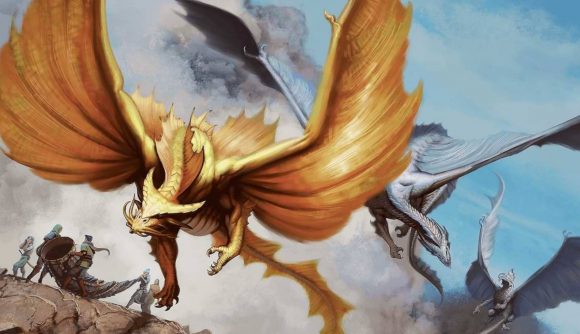 The remaining Dungeons and Dragons sourcebooks set to release this year have been delayed. Announced by publisher Wizards of the Coast yesterday on Twitter, Fizban’s Treasury of Dragons and Strixhaven: A Curriculum of Chaos will both release later than expected, with both their physical and digital versions pushed back. Wizards has given no concrete reason for the change in release date.

Fizban’s Treasury of Dragons, the next book to release for the tabletop RPG, has been pushed back by a week, and will now hit stores on October 26. Strixhaven: A Curriculum of Chaos, meanwhile, received a bigger delay, and is now planned to launch on December 7, three weeks after its initial release date.

Wizards gave no reason for the delay, other than joking that “goblin related issues” had affected the publisher’s release schedule. However, the delay follows a similar announcement made last month when Wizards revealed the upcoming sourcebook Mordenkainen Presents: Monsters of the Multiverse would be released in January next year after production and shipping delays had scuppered its original 2021 release window.

The next sourcebook to release for D&D, Fizban’s Treasury of Dragons focuses on the classic fantasy creatures, adding more lore and resources for using them in Fifth Edition. The book will add two new subclasses, extra Dragonborn ancestries, explainers on the history of Dragonkind, and a bestiary containing full descriptions, rules, and narrative prompts for 20 types of dragons. It’s billed as the comprehensive guide to all things draconic in D&D.

Due to what we can only describe as “goblin related issues”, there will be a slight delay in our schedule affecting the following releases:

Strixhaven: A Curriculum of Chaos – Dec. 7

We apologize for any inconvenience.

Strixhaven: A Curriculum of Chaos, however, will be the next Magic: The Gathering sourcebook to release for D&D. A mixed adventure and setting book, it will introduce the magical university that first appeared in MTG earlier this year. Alongside new subclasses and player options, its four adventures will chart your journey through the school’s year groups, and place heavy emphasis on atypical D&D activities, such as extracurricular activities, academic rivalries, scholarly challenges, and new social mechanics that cover romances with NPCs.

We’ve already had our first look at some of the creatures coming in Fizban’s book, as well as the Owlin and college mascots making their way to Strixhaven. Check out our Fizban’s Treasury of Dragons and Strixhaven: A Curriculum of Chaos guides for all the latest news on their contents and release dates.

Otherwise, have a read of our D&D classes guide, or our pick of the best D&D character sheets to improve your game.