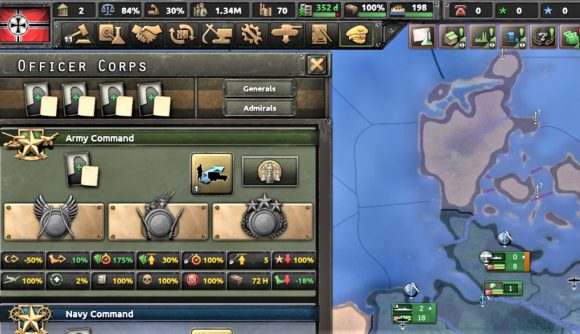 Hearts of Iron 4’s upcoming No Step Back DLC and Barbarossa update will add a new Officer Corps tab, tidying up the game’s mechanics for appointing military chiefs and advisers, and adding the ability to assign government adviser roles to your field commanders, developer Paradox revealed in a dev diary blog post on Wednesday. There is still no confirmed release date for No Step Back or the Barbarossa update.

The post said the system’s aim was to pull together “disparate systems such as the high command, generals, military-focused national spirits, and doctrines” by bringing these mechanics under one unified menu interface. It also adds the ability to “promote” any of your Generals, Field Marshals or Admirals to become advisers, in addition to their duties as a field commander – granting you adviser bonuses, based on the skill level and traits of the officer you choose to promote.

Alongside the Officer Corps changes, the dev diary post also said No Step Back would bring a substantial rebalancing to the game’s experience system (an in-game resource, which you earn through advisers, military training and actual combat, and can spend on designing new army divisions and navy ship variants).

“Experience generation in general has been weighted and balanced in order to achieve a more gradual switch from peacetime generation (a strong cadre of advisors, and unit training), through to wartime,” the post explains. 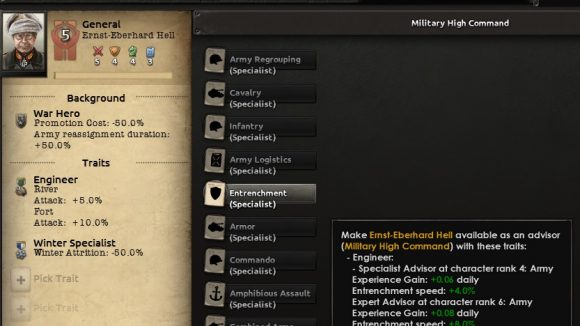 With the new expansion, however, experience rewards for combat are going down, proportionally, while “overall experience generation will be consistently higher”. This, it says, is largely to accommodate the new tank designer feature, which – like the division and ship designers – will cost you experience to use.

Hearts of Iron 4’s No Step Back DLC, the game’s final full-scale expansion, was announced at publisher Paradox’s PDXCON Remixed event on May 21.

Focused on the Soviet Union and broader Eastern Front of WWII, its new features include the aforesaid tank designer system, brand new focus trees for Poland and the Baltic nations, and drastic changes to the game’s crucial Combat Width mechanic.