Another plane from Magic: The Gathering is making its way to Dungeons and Dragons in the upcoming sourcebook Strixhaven: A Curriculum of Chaos. Set in the titular School of Mages, the book transports the trading card game’s most recent expansion to the popular tabletop RPG, giving players and DMs the resources to adventure across its magical university. The sourcebook will release on November 16.

As reported by Polygon, Strixhaven: A Curriculum of Chaos will introduce new player options for creating your own studious mage, and Wargamer was told in a press briefing last week that some of these character options will be debuted in an Unearthed Arcana playtest document releasing later today. Amanda Hamon, senior designer for D&D, is working as story lead on the upcoming book, and previously contributed to the game’s most recent release, Van Richten’s Guide to Ravenloft.

The book’s cover art, illustrated by long-time MTG contributing artist Magali Villeneuve, depicts three Strixhaven students in a library, accompanied by a scroll-carrying gargoyle. More details of the book will be revealed by publisher Wizards of the Coast today, as part of D&D’s Week of Legend Lore event.

Introduced in the latest MTG set, Strixhaven is a wizards’ university comprised of five colleges – Lorehold, Prismari, Quandrix, Silverquill, and Witherbloom. According to MTG lore, each was founded by a dragon and represents a different area of magical expertise, played out in-game through differing mana colour combinations. The school is inhabited by inquisitive students and powerful professors, including infamous planeswalker Liliana Vess, and is presented as the hotspot for spellcasters of the multiverse. 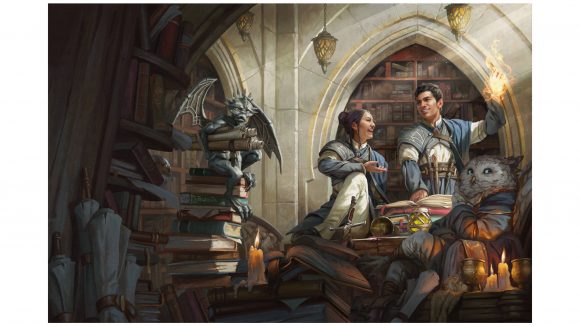 Strixhaven: A Curriculum of Chaos will be the third D&D sourcebook to feature a setting taken from Magic: The Gathering. Guildmasters’ Guide to Ravnica introduced the titular plane as a campaign setting in 2018, while 2020’s Mythic Odysseys of Theros focused on the Greek mythology-inspired plane of the same name.

D&D is also making its own waves in the multiverse, with Magic: The Gathering’s Adventures in the Forgotten Realms crossover set scheduled to release in July. We’ve seen a few spoilers already, including a Drizzt Do’Urden card.

It’s not a slow week for D&D. Wizards of the Coast yesterday revealed The Wild Beyond the Witchlight will be the next adventure book for the tabletop RPG. Introducing the wily magic of the Fewyild to D&D 5E for the first time, the book will release on September 21.

If all this talk of Magic is going over your head, read our guide on how to build a Magic: The Gathering Deck, or check out our guide to building a Commander deck if you’re an experienced summoner. Alternatively, explore a different side to D&D, with our guide to the best Dungeons and Dragons board games 2021.